A new kind of “house hunters” near you 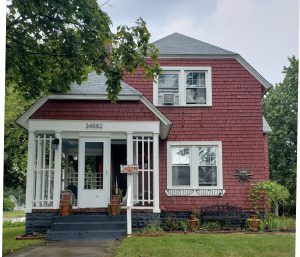 Andrea Graham owns The Hathaway model from the Sears catalog of kit homes. This English cottage-style home in Wayne was built around 1928.

By Carolyn Marnon – Did you know there was a time when you could buy a kit through a catalog and then build your own home? Last September, Novi residents and kit home experts Andrew and Wendy Mutch came to the Wayne Historical Museum and spoke about their own kit house, a 1926 Sears Hamilton, the history of kit houses and an overview of some kit houses found here in Wayne.

Kit homes got their beginnings in the early 1900s in Bay City, Michigan. The Aladdin Company, owned by two brothers, Otto and William Sovereign, was one of the longest-lived manufacturers of mail-order, or kit, homes.  Several years after the Sovereign’s introduced kit homes to the nation, Sears, Roebuck and Company and Montgomery Ward entered the market. Aladdin and Sears, the largest companies, sold thousands of kit homes per year in the 1920s. The 1930s brought decreased kit sales. The final Sears Modern Homes catalog came in 1940 and the last home kit was sold sometime around 1944.