Annual river clean-up planned for May 30 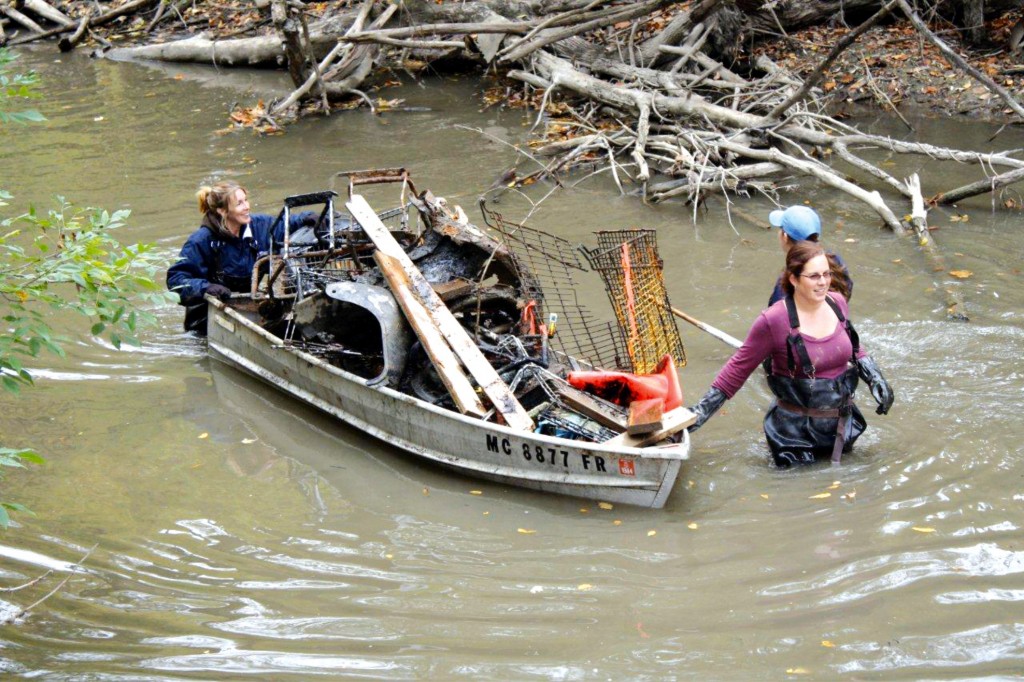 Volunteers remove debris from the Rouge River. This year’s annual river clean up takes place on May 30.

By Kurt Kuban – On a recent Sunday, I spent the afternoon kayaking with some good friends. While it was a fairly crisp spring day, the sun was out and it warmed our faces as we cruised past giant trees towering overhead, their buds just starting to show themselves. The birds were out – singing to us as we paddled by. On a couple occasions kingfishers darted by, squawking at us as if they were startled by our presence in their domain. We also saw several muskrats swim by, a groundhog dive into his hole along the river bank, hawks soaring above and plenty of beautiful, but shy wood ducks.
It was a fantastic day on the water. And, believe it or not, it was right here in Wayne on the Rouge River.
Although I would classify our little jaunt as a joy ride, we were also doing a little scouting for the upcoming Rouge Rescue, the annual river clean up that takes place this year on May 30.
I’ve been coordinating the annual event in Wayne for more than a dozen years. During that time, the goal of the event has shifted from almost exclusively removing manmade trash from the river like shopping carts, tires and even bathtubs and stoves, to focusing our efforts on opening up the river for recreational pursuits like fishing and, yes, canoeing and kayaking. Indeed, we’ve come a long way.
My two companions on the recent trip — Matt Mulholland and Jim Zech – are just two of the many volunteers who have contributed their time and efforts to cleaning up our little river. So many others have chipped in over the years. The community has really embraced the cause, from the business community and local organizations like Wayne Rotary and Civitans, to all the individual volunteers who come out and get dirty year after year on Rouge Rescue. Even the city government has helped out, particularly the DPW crew which has provided vital support over the years.
I’m happy to report, after our little reconnaissance run, there isn’t too much manmade trash in the river anymore with the exception of a few tires between Hix and Wayne roads, a section of the river that is about 3-miles long. It’s the same stretch where we’ve held the Logjam Classic Canoe Race the last two years as part of Rouge-A-Palooza, our day-long festival dedicated to the Rouge River that we will be hosting again on October 10 in Goudy Park.
If you haven’t been to Rouge-A-Palooza yet, you really should mark it on your calendars. In addition to educational displays focusing on nature (including plenty of live animals), the event also features live music, the canoe race, great food and lots of family activities. We’re already in the planning stages for the 2015 event, which we believe will be bigger and better than ever.
Of course, our improving river all starts with Rouge Rescue. We’re always looking for new people who care about our natural world and want to help save “our” river. It wasn’t too long ago that the Rouge River caught fire near its mouth in Detroit. To think that we are now holding a festival to celebrate it is truly remarkable to me. That tells me how far we’ve come.
For Rouge Rescue, we will be working along the section of the river from Goudy Park downstream to Dynamite Park. There will be several activities going on — something for all ages, from opening up logjams for canoeing to pulling invasive plants and improving the riverfront in Goudy Park.
There’s also plenty of water and pop bottles to be picked up. It always amazes me how that stuff ends up in the river. Some people just don’t care, I guess. Every time I get disappointed about it though, I remember all of the people who go out of their way to make a difference and who genuinely want to see the Rouge restored. They far outnumber the knuckleheads who get their kicks tossing their trash into the river.
If you want to help out, sign up begins at 9 a.m., May 20, at Goudy Park. From there, we will break up into groups and hopefully get everything done. I always get a kick seeing people come out for the first time. They are often amazed by how much natural world we have left here in Wayne.
The Rouge River provides the lifeblood. It’s an amazing resource, and it is improving daily. Who knows where we’ll be in another dozen years. Hopefully seeing kayakers on the river on a regular basis.
To learn more about Rouge Rescue and what you can do to help the river, visit www.therouge.org. If you have questions about our event in Wayne, shoot me an email at kkuban3240@aol.com or call (734) 716-0783.