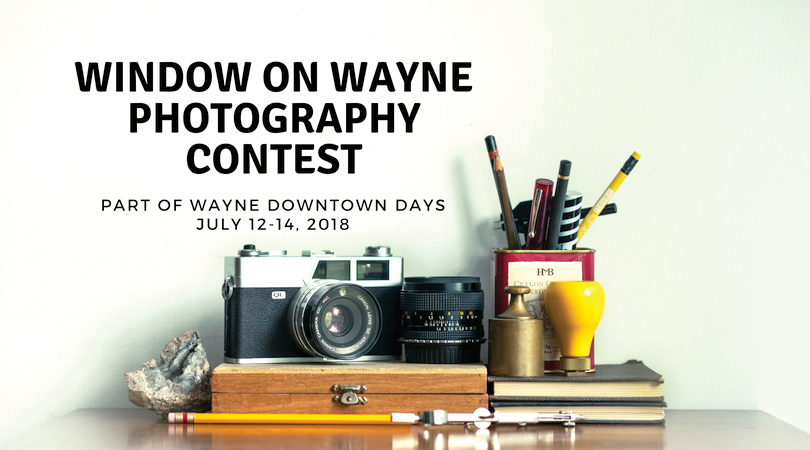 Helium Studio is delighted to announce the 2018 “Window on Wayne” photography contest as part of the City of Wayne’s Downtown Days, July 12-14.
This year’s theme is “Art-o-motive.” To honor the history of Wayne as it related to automobile companies, this year’s contest photos must include a “mobility” reference – any kind of mobility. Trains, buses, cars, strollers, bicycles, etc. It’s up to you.
Start taking photos. Photos can be taken from anywhere within city limits, but must be taken during the contest time frame, May 28 – June 24, 2018. Once you have the perfect capture, email it to Helium Studio (shopheliumstudio@gmail.com) for display on the special Facebook page.
On June 25 public voting will open on submitted photos. Online voting will run through July 1. The top 10 “Liked” photos will be displayed at Karma Coffee and Kitchen during Downtown Days, July 12-14. During this time, the public will be able to view and vote at Karma Coffee and Kitchen for their favorites.
At the end of the exhibit at Karma Coffee, the top three vote-getters will be announced and three winners will receive cash prizes! Exhibit opening and awards ceremony details are still to be determined.
RULES
1. Contest dates
– The contest will run from May 28, 2018 until July 14, 2018.
– Photo submissions accepted beginning June 11 until June 23, 2018.
– Online (Facebook) voting to begin on June 24 and ends at 6:00 p.m. July 1.
– Top 10 “Liked” photos will be announced on July 2, 2018.
The artist will have until July 11 to deliver their printed and framed photo(s) to Karma Coffee for display.
– Public voting at Karma Coffee will be open during Downtown Days, July 12-14. Further times and details will be announced soon.
2. Photographer Requirements
Participants will agree to the following conditions:
– Photos must be taken during the presented time frame.
– Photos must be taken within the city limits of Wayne, Michigan.
– No illegal, pornographic or otherwise offensive images will be accepted. Helium Studio retains the right to refuse any submitted photograph. THIS IS NON-NEGOTIABLE.
– Participants are allowed to submit 2 entries.
– Participants agree to costs associated with the printing, matting and framing of images selected for display.
– By submitting photos for consideration in this contest, you give permission for Helium Studio, The City of Wayne, Karma Coffee and Kitchen and interested media outlets for the publication of your photo for promotional use during this contest. There will be no entrance fee or age requirement for participation.
3. Awards
-Photographers of the top THREE publicly-voted photos will receive the following:
First place – $100
Second place – $75
Third place – $50