From big things at WMHS to even bigger at Harvard 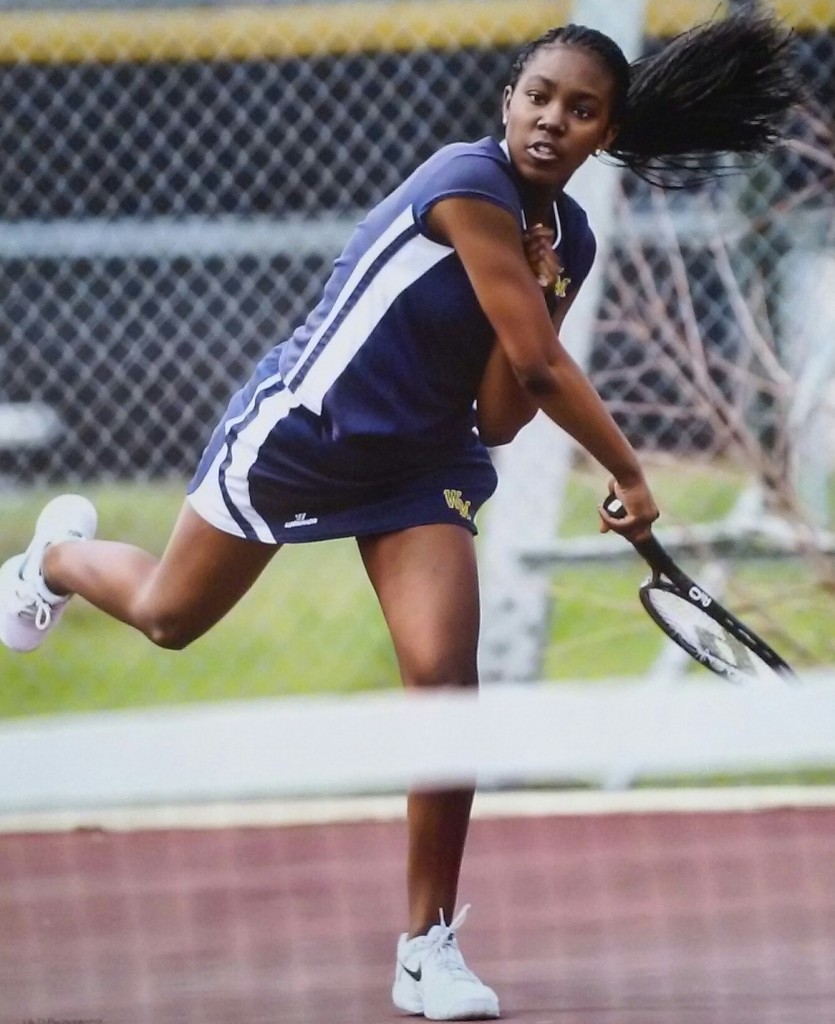 Janae’ Strickland, 17, ended her senior year tennis season with a 17-4 record, she was team captain and won a couple first place medals during tournaments.

By Sarah Shurge – Swat!
The small yellowish-green ball is ricocheted perfectly off the tennis racquet with such precise accuracy it lands just on the white line, unable to be hit by her opponent.
The heat is radiating off the court. She pulls her black Nike visor down and wipes the sweat off her forehead with the back of her hand. She doesn’t hear the coach or people cheering for her. Her mind is clear. She is completely in the zone.
The ball is served and she hits it cross court, right where her opponent doesn’t even have a chance to return it. Her signature move. She wins the match.
Janae’ Strickland, 17, ended her senior year tennis season with a 17-4 record, she was team captain and won a couple first place medals during tournaments. However, tennis isn’t her greatest accomplishment. Strickland will be attending Harvard University in the fall.
Strickland, daughter of Del and Keith Strickland, younger sister to Jamiel Strickland, grew up in the same neighborhood in Wayne all of her life. Saturday, May 30, Strickland graduated valedictorian from Wayne Memorial High School Class of 2015 with a 4.12 GPA.
Not only did she dedicate her time to tennis for four years – playing number one singles for the past three, she also played volleyball for four year – team captain for a year, basketball for two years and Club Tennis with Livonia Y. for two years, but she was also involved in National Honor Society for two years, Upward Bound for four years, Senate for two years – junior year as Recording Secretary and Treasurer her senior year, Champions for two years and LEDA: Leadership Enterprise for a Diverse America her junior year summer and senior year. She also made it on prom court her senior year, although she didn’t win.
Strickland always had a love for English like reading and writing, but her junior year she took an AP U.S. History class and realized how much she loved U.S. government. She realized she truly loved writing speeches and argumentative pieces. She claims Ms. Pypa showed her her true love for politics, which led her to want to major in Government and Economics.
Originally, Strickland never actually thought she had a chance at getting into Harvard. She applied to the University of Chicago and got an early acceptance. She applied to a few other universities including the University of Pennsylvania, who also accepted her but she was sure on Chicago. Then on March 31 at 5 o’clock pm, Harvard sent acceptance letter and all other plans went out the window.
“I still have love for the University of Chicago but when Harvard says yes you kinda just can’t say no,” said Strickland.
Strickland plans to do four years at Harvard. She wants to play club tennis and get involved in their Institute of Politics and the Internations Relations Council which is an umbrella for different groups dealing with different cultures, languages, businesses and relations. Strickland also wants to study abroad in the Middle East during her time at Harvard, specifically in either Israel or Egypt and she might minor in Near Eastern Civilizations and Languages.
After her four years of undergrad, Strickland plans to continue her education at law school.
Strickland said that Harvard costs about $60,000 a year. However, thanks to financial aid and a few (four or five) local scholarships, almost everything is covered for this upcoming year.