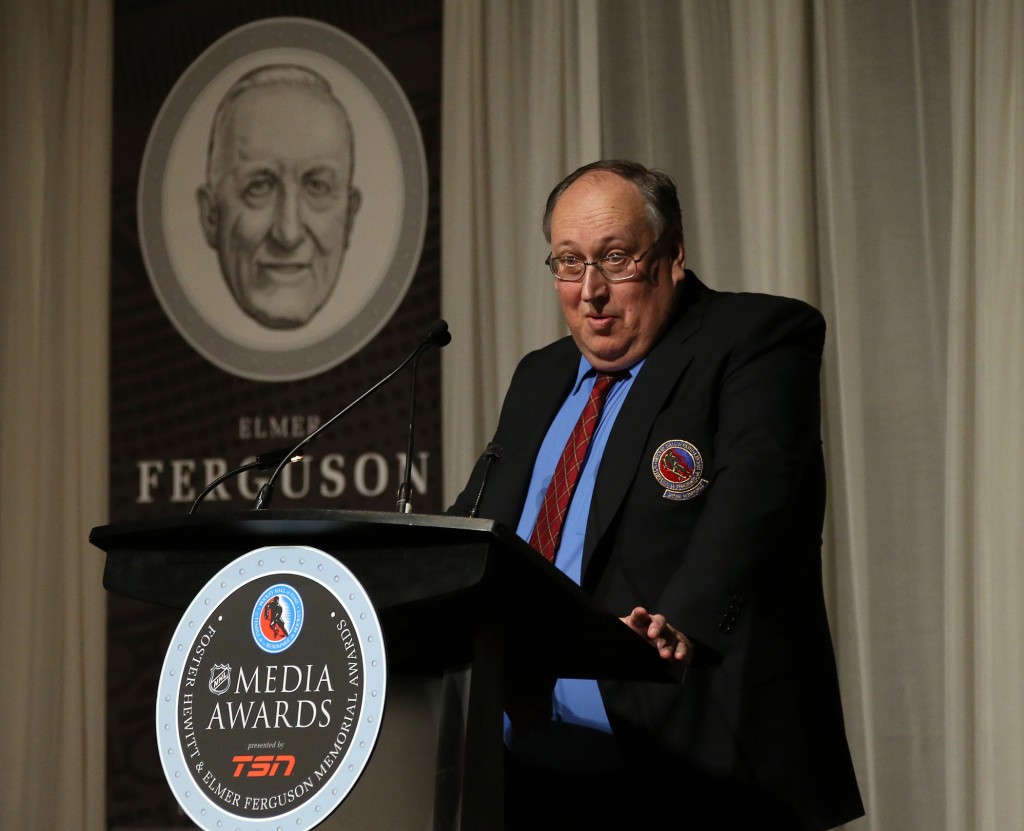 By Meagan Dowell – Some people may know him as the NHL writer for USA Today, or the author of books about sports icons like Darren McCarty and Chris Chelios.  He’s also known as a 2014 inductee into the NHL Hall of Fame.  He is Kevin Allen, Wayne Memorial’s 2015 Distinguished Alumnus.
Allen is the author of more than seventeen books, including Chris Chelios: Made in America and My Last Fight: The True Story of a Hockey Rock Star. He has covered more than 570 NHL playoff games, 26 Stanley Cup finals, and nine Olympic tournaments.
Allen, who graduated from Wayne Memorial in 1974, said he is very grateful for the opportunity to be this year’s Distinguished Alumnus and the keynote speaker at commencement. “(At Wayne High), I had teachers who were very helpful in steering me in the right direction,” Allen said. “I’m fortunate to know what I wanted to do at an early age. And so by the time I got to high school, I told teachers I intended to be a journalist.”  Since Allen loved his career choice so much, and he had run out of classes to take, a journalism seminar was put in place for him.
After high school, Allen attended Eastern Michigan University and got a spot on their newspaper, The Eastern Echo, for which he was the managing editor his senior year.  Following college, Allen went to Arizona where he worked for a local paper as a sports and political writer.
“It was a great job,” Allen said. “I would cover high school Native American reservation football on Friday nights, and Ted Kennedy’s speech on water rights to the Native American Association on Saturday morning, and Arizona State football Saturday afternoon.”
“I think it’s a very important aspect of life to find something that you are passionate about that can pay you a decent wage,” Allen said. Journalism is not just a job for Allen, it is his passion. “You have to love what you do,” as Allen puts it.
Over the years, Allen said, the job of journalism has changed. “(As a journalist), you used to have to entertain and provide information,” Allen said.  “The problem now is the information aspect. There is so much available, the need for people like me isn’t that great.”
Allen’s career as a sports journalist has provided him the opportunity to do a lot of travel. He’s covered several Olympic games and other international events. Some of the places where he has traveled include Japan, Norway, Russia, Sweden, France, Austria, Germany, and many more.  “I’ve always enjoyed the travel I’ve gotten to do,” Allen said.
In 2013, Allen was the recipient of the prestigious Lester Patrick Trophy, which is an annual award presented for outstanding services to hockey in the United States. NHL players, officials, coaches, executives, and referees are all eligible.  In December 2014, Allen was inducted into the Hockey Hall of Fame as a recipient of the Elmer Ferguson Memorial Award. Both are amazing accomplishments.
“The last two years, it’s been a lot of fun being Kevin Allen,” Allen said.
Allen said that the real accomplishment is being recognized for what he loves to do.  “I just like writing stories every day. Not everyone enjoys the process of writing; it can be painful, but I enjoy it.”
“Everybody can write, but I can do it no matter what’s going on in my life. If I’m sick, or having a bad day, if everybody in the world is mad at me, I can still sit and write a story.” At the heart of reporting, Allen said, is storytelling. “There will always be a need for storytellers.”
As the keynote speaker at WMHS’s commencement on Saturday, May 30, at Eastern Michigan’s Convocation Center, Allen plans to talk about how the enjoyment of life comes from the exploring of life.  “What I want students to take from my speech is that a life fully explored is a life well-lived,” Allen said.  “Don’t listen to people who tell you to march through life by putting one foot in front of the other.  It’s when you veer off course that you begin to fully appreciate what it is all about.”