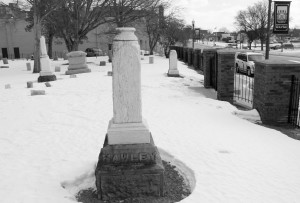 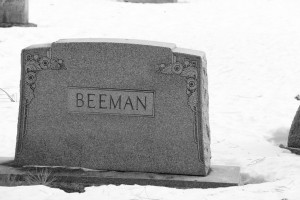 Life was difficult in the early years of our community.  Our cemetery tombstones and grave markers display the great number of deaths of men, women and children at very young ages.   While modern medicine and better diets have increased the life expectancy for people today, there were a number of people buried in our Old Wayne Cemetery who lived well into their ninetieth years.  Cornelia Hawley, born in Vermont in 1802, taught school, never married, and passed away at the age of 91 in 1893.  Jean Beeman, wife of Archibald Beeman, was born in Scotland in 1813, immigrated to the United States, bore 9 children, and lived in Nankin Township until she passed away in 1906.  Other early settlers who lived into their nineties were Laney Brockway (1768 – 1860) from Connecticut, Hannah Bogardus (1803 – 1897) from New York, and Charlotte (Hall) Alexander, a doctor’s wife, born in 1825 and died in 1915. The Wayne area was a melting pot of settlers who were born in many eastern states such as New York, Massachusetts, Pennsylvania, Vermont, Connecticut, New Hampshire and Maine. Wayne also welcomed a number of immigrants from Europe who pursued new lives in this growing community.  Many came from England like Henry Stokes, an English sailor who settled in our area in 1840 and became a farmer.  Ireland was the birth country of many Wayne area citizens such as the Crawfords, McKillops and the Killens.  The Scots were well represented in Wayne with Dr. Thomas Morrison who settled here in 1861 and James Dawson who came to Wayne in 1840.  Also, Robert and Isobelle Hosie lived in Wayne by the 1860’s.  They were the parents of James Hosie who founded the Standard Bank and was a city councilman in 1900.     A number of families came from Germany such as the Schaible’s, Sawslayer’s, Schrader’s, Buhrer’s and Muller’s.  Some of the old tombstones hold epitaphs written to memorialize loved ones and were all written in German.  Some settlers came from as nearby as Ohio and Detroit.  Mitchell Raymo was born in Detroit in 1813 and is buried in the Old Wayne Cemetery.  His family tree can be traced back to France in 1630’s and his ancestors first settled in Montreal, Quebec.  We have Raymo’s who live in Wayne today.  Early Wayne settlers were truly a mix of people from all over. As you walk through our cemetery, you learn a great deal by reading the names, dates and epitaphs written on the tombstones and gravestones.  An epitaph is a phrase on a marker that is the final “word” on a person’s life. It can be as simple as “Gone Home” or as complex as any number of lines of biblical or other known texts.   It can be as common as “Gone but not forgotten” or “At Rest,” or it can be an original phrase that the deceased chose during his life as a representation of his life, personality, and served as an eternal remembrance to the passerby. The most original and personal epitaph in the Old Wayne Cemetery is that of John Tinkham:

(Material for this article was taken from the pamphlet “A Guide to Old Wayne Cemetery” published by the Community Development Department of the City of Wayne.)