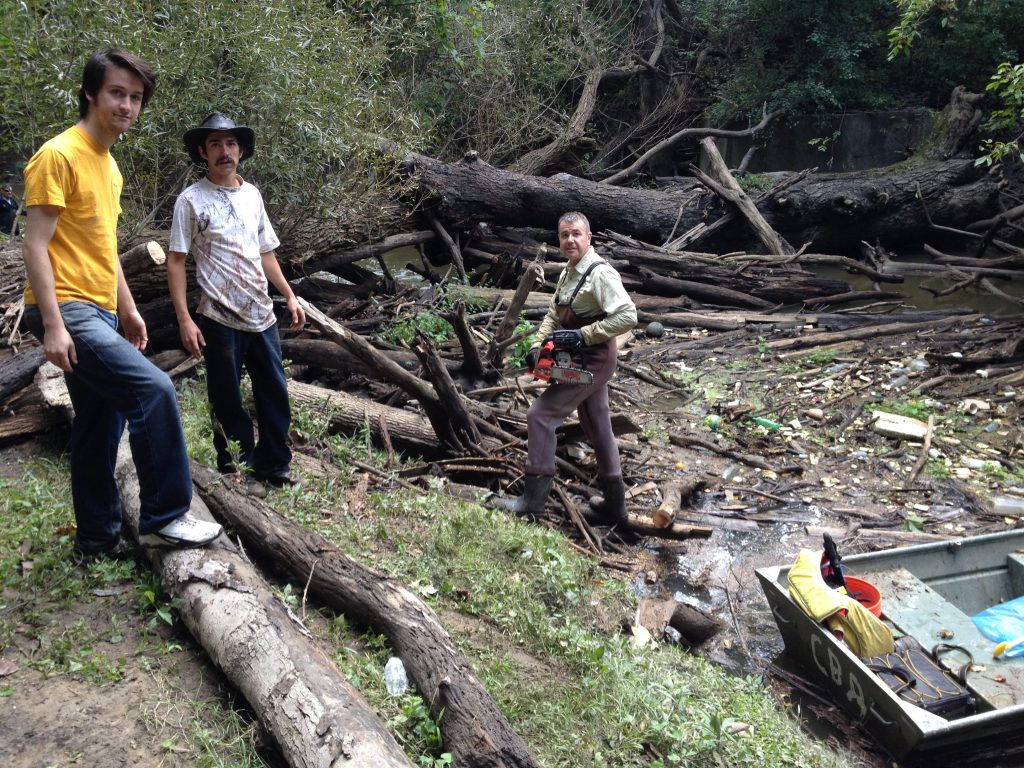 Volunteers work to remove debris from the Rouge River.

There’s been lots of good news flowing out of our Rouge Rescue in recent years.
After generations of neglect, the river began to make a comeback a couple decades ago.  Municipalities in the Rouge River watershed, like Wayne, began to implement pollution controls to meet federal Clean Water Act rules. As a result, water quality has improved markedly, especially in the Lower Branch, which is the main artery of the Rouge that flows through our city.
Local volunteers also went to work to clean out all of the trash that fouled the Rouge and was a local eyesore. Over the last couple decades, a small army of volunteers has pulled out of the river a virtual mountain of tires, shopping carts, car parts, bathtubs, stoves, barbecue grills, lawn mowers… and just about anything else you can imagine. Even a pop machine. Working in conjunction with City of Wayne officials, the volunteers have really improved the aesthetic of the river, and helped change attitudes about the Rouge.
“Over the years, we have had hundreds of people come out and volunteer — from school children to seniors who remember playing in the Rouge when they were kids. People really care about the river, and want to see it cleaned up. It’s really encouraging to see all the hard work paying off,” said Kurt Kuban, who has helped coordinate Wayne’s Rouge Rescue event since 2001.
In addition to cleaning up all the trash, the volunteers have also been busy opening up all the logjams in the Rouge River through Wayne, so the river can be used for canoeing and kayaking. 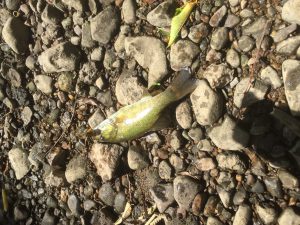 Fish are returning to the Rouge River including this small mouth bass that was caught in Wayne.

City officials jumped on board, applying for a couple of grants in recent years to help make this recreation opportunity a reality.
First, the city received a million dollar federal grant through the Great Lakes Restoration Initiative to remove the obsolete Wayne Road dam, which impeded passage of both canoes and spawning fish. The project was completed in 2012.
A couple years later, the city received a grant from Wayne County to build a canoe/kayak launch at Goudy Park. The project was completed last year. The Goudy Park launch is now even listed on the Michigan Water Trails website at www.michiganwatertrails.org/location.asp?ait=av&aid=5010.
Wayne has definitely been a leader in the push for recreation along the Rouge. Wayne County and other municipalities have begun to take notice, and now have the goal of adding other launches along the river, from Canton Township to Dearborn, where the Lower Branch empties into the Main Branch of the Rouge.
Of course, there is still plenty of work to do to make the Rouge River a sustainable source of recreation in our community. And the upcoming Rouge Rescue event on Saturday, June 10, will be an opportunity for local residents to lend a hand.
The event will take place at Goudy Park, which is one of the best places to access the river in Wayne. Not only is the launch located there, but there is also a trail and benches situated along the river where anglers can wet a line or people can just sit back and enjoy a great natural setting that is in the heart of downtown Wayne.
Volunteers are needed to pick up trash in and along the river from Goudy Park and the nearby Mill Trail/Dynamite Park areas, as well as maintain trails, and clean up/refinish some of the benches along the river. Some volunteers will also be in the river opening up logjams for canoeing. So there really will be something to do for people of all physical abilities. 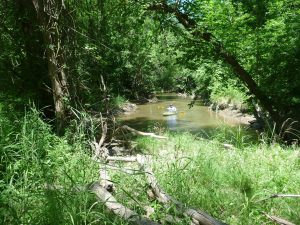 The City of Wayne is working with volunteers to open up the Rouge River to canoeing and kayaking.

Rouge Rescue T-shirts and work gloves will be provided to all volunteers. There will be refreshments. Sign-up begins at 9 a.m., and work will take place from 9:30 a.m.-12:30 p.m.
“This is a great event for Scout groups and students who are looking to complete public service projects. Rouge Rescue is great if you are looking for a way to help improve the community,” Kuban said. “So come out and give a hand. The Rouge River needs you.”
For more information, contact Kurt Kuban at (734) 716-0783 or kkuban3240@aol.com.

Committed to bringing Wayne together