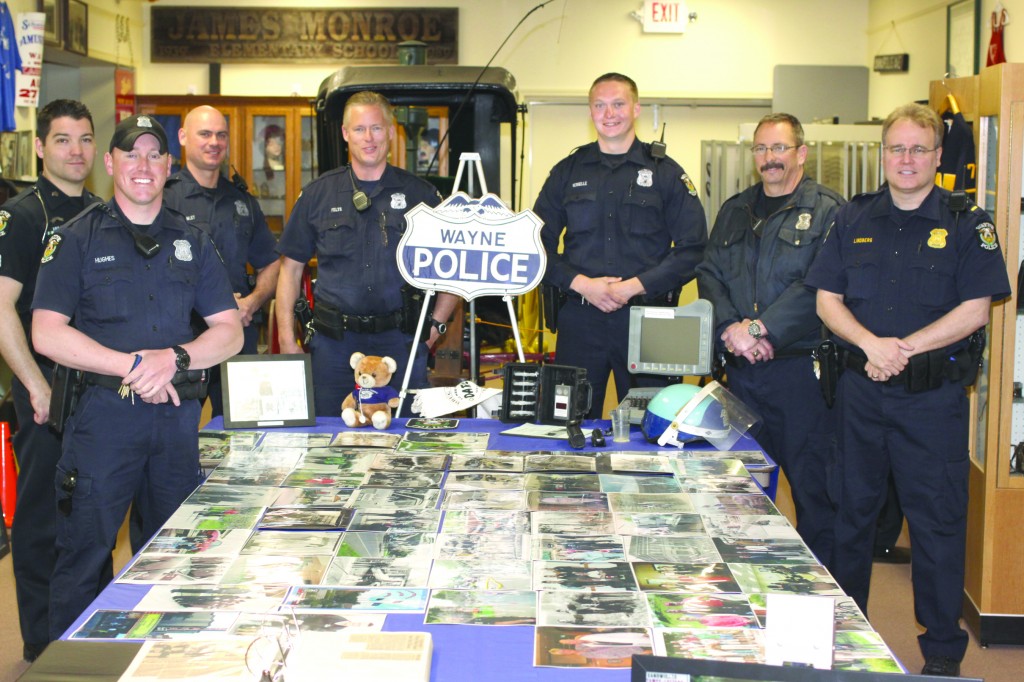 Wayne Police officers check out the Police display at the Wayne Historical Museum featuring photographs of the Wayne Police Department over the years, and the equipment used by the officers. The Museum is open Thursday and Friday 1 p.m. to 4 p.m. The admission is always free.

By Dee Ryan – The Wayne Historical Museum will observe National Peace Officers Day, which is May 15, 2014.  The Museum will host a display honoring the Wayne Police Department in the month of May, 2014.
In the year 1962, President John F. Kennedy signed a proclamation that designated May 15 of each year as Peace Officers Memorial Day, and the week in which the day falls as National Police Week.
The Wayne Police Department was founded on Oct 1, 1926 and has continued to serve the citizens of Wayne for 88 years.
The display at the Wayne Historical Museum will feature photographs of the Wayne Police Department over the years, and the equipment used by the officers will also be on display.
The display will also honor the memory of Wayne Patrolman, Leonard Anderson.  He was killed while on duty 40 years ago.  Officer Anderson passed away from gunshot wounds on May 25, 1974.  He was 23 and the only Wayne Officer killed in the line of duty.
The Wayne Historical Museum would like to thank the following Wayne Police Officers for their help with this display: Police Chief Jason Wright, Deputy Police Chief Al Maciag, and Lt. Patrick Lindberg.
The Museum is open Thursday and Friday—1p.m. to 4p.m.  The admission is always free.

The Garden Club’s Ruth Wenzel gave us this information.  The Wayne Garden Club became aware of the Blue Star Memorial Marker about two years ago and it for the kind of project we like to do.  The memorial is designed by the National Garden Clubs, Inc. and is only available to local garden clubs. The Memorial honors all past, present, and future military personnel.
Raising the funds for its purchase was accomplished by selling the “Recipes in Bloom Cookbook” The club members submitted their favorite recipes.  Alicia Marnon and her committee went to work producing a wonderful cookbook.  Cookbooks are still available for $8 through the garden club and will be available the day of the ceremony.  We are planning a dedication for the Blue Star Marker at 2:15 p.m. on  May 25th. Following the annual parade.  The ceremony and memorial will be in Veterans Plaza, adjacent to the Wayne Library.
Everyone is invited and we especially welcome all the veterans and military personnel from the area.
In this way we have an opportunity to say “Thank You.”
The Ladies’ Literary Club held their annual Scholarship Donation evening.  It was at the Congregational Church on April 15.  And as in other years always a fun night.
The scholarship donations will go to two young women.  One will be from WMHS  and one from John Glenn.  Each will receive $1,000 for college.
About 50 women were on hand.  At our table:  Gloria Rowland and two of her daughters—Kathy and Linda. Kathy Koveleskey and daughter Ann, who was visiting from Aspen CO.
Also sitting with us was Jane Elery and Jan Teague.
Each table was devoted to a particular author.  Ours was Irish writer Maeve Binchy.  And her books were reviewed for us by Judy Howton.
There were gift baskets and yummy refreshments, but the best part was seeing old friends like Shelby Szukaitis, and meeting new ones, such as Cheryl Kuban and Pam Wright.
Everyone went home with a lightly used book and a packet of baked goods.  We’ll all meet again in May when we gather for dinner at Roses Restaurant in Canton.  That’s when we’ll meet our ‘Scholarship’ graduates.

A big “Thank You” to the good men of Wayne’s DPW, who came out and chopped up and took away a huge tree limb that had come down in last month’s wind storm.  Thanks again, we really appreciate it.

Condolences to the Smoes and Gilbert families.   They are our Biddle Street neighbors. Gary Smoes lost his Mom and Ron Gilbert, his Dad.  Please accept our heartfelt sympathy. Condolences also to Phyllis Stein, whose son, Mark died in CA.  Phyllis is a treasured member of Wayne’s Garden Club and a Friend of the Library.

City asks for 2 mills from DDA