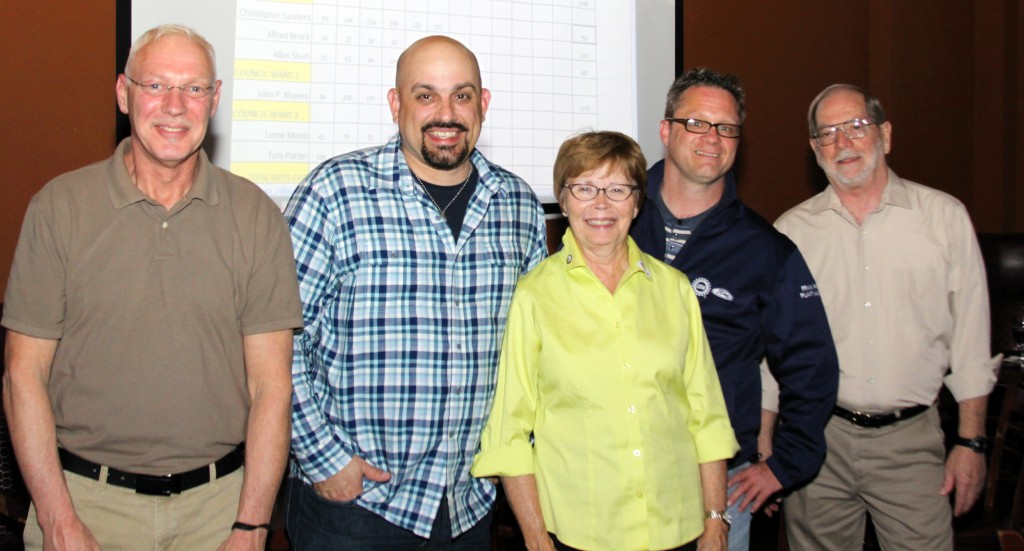 And the winners are…
Councilman Anthony Miller, Councilman John Rhaesa, Mayor Susan Rowe, Councilman Christopher Sanders and Councilman Tom Porter at the Avenue Downtown Wayne after learning they had won seats on the City Council. Photo by Mike Londeau

Unofficial Election Results
Mayor
Susan M. Rowe – 960
Bob Boertje – 796
Lenard Fisher – 38
City Council At-Large
Anthony Miller –  1149
Lucietta A. Mile – 360
City Council Ward 1
Christopher Sanders – 794
Allen J. Shuh – 544
Alfred Brock – 199
City Council Ward 2
John P. Rhaesa – 1192
City Council Ward 3
Tom Porter – 1097
Lorne Monit – 554
City Manager hired
The City Council unanimously approved Lisa Nocerini as City Manager at the council meeting held October 6.  Ms. Nocerini was serving as Interim City Manager during the council’s search for a new city manager after the resignation of David M. Murphy last spring.
Community coffee meeting with directors
The next Community Meeting/Coffee Hour will take place on Monday, November 23rd, from 9:00-10:00 a.m. at the Wayne City Hall located at 3355 South Wayne Road. These meetings are being held to provide residents and businesses in Wayne with an opportunity to engage with the City Manager and the Department Directors on issues that are important to you.
Helium Studio Grand Opening
After months of updating the building, painting, installing new floors and lighting, decorating and stocking the displays, Helium Studio (3127 S. Wayne Rd) looks forward to welcoming friends, neighbors and artists to their grand opening on Friday, November 13, from 11 a.m. to 8 p.m. Be the first to see the renovated space and shop handmade goods from more than 50 Michigan artists and makers across all media.  At 6 p.m they will host a reception with snacks and beverages.  Come show your support for another business that has made their home in Wayne.
Cookbooks Available for Christmas Gifts
The Wayne Garden Club has cookbooks available for $10 each. The cookbooks could be the perfect Christmas gift for that special someone on your gift-giving list.  Contact Alicia Marnon at 734-595-4217 to make arrangements.
Scarecrow Contest
The 2015 scarecrow winners were announced at the close of the Scarecrow Reception held at the Wayne Farmer’s Market on October 14.  The Judge’s Choice went to Brook Wess and her girls, Verity and Temperance Gorman, for their Scare”crow”.  People’s Choice went to American Jetway for their Tin Man.  “We really enjoy partaking in this fun community event each year,” stated Brook on the Wayne Main Street facebook page.  Kurt’s Caps of Wayne donated the prizes.
Make a Difference Day
Saturday, October 24, was National Make a Difference Day, a day of community service.  “Pennies from Heaven” debuted in Wayne for the first time.  Members of the Goodfellows collected spare change and monetary donations at the site of the former Frank’s Furniture Store on Wayne Road.  This will go towards helping ensure that every child in Wayne has a Christmas. 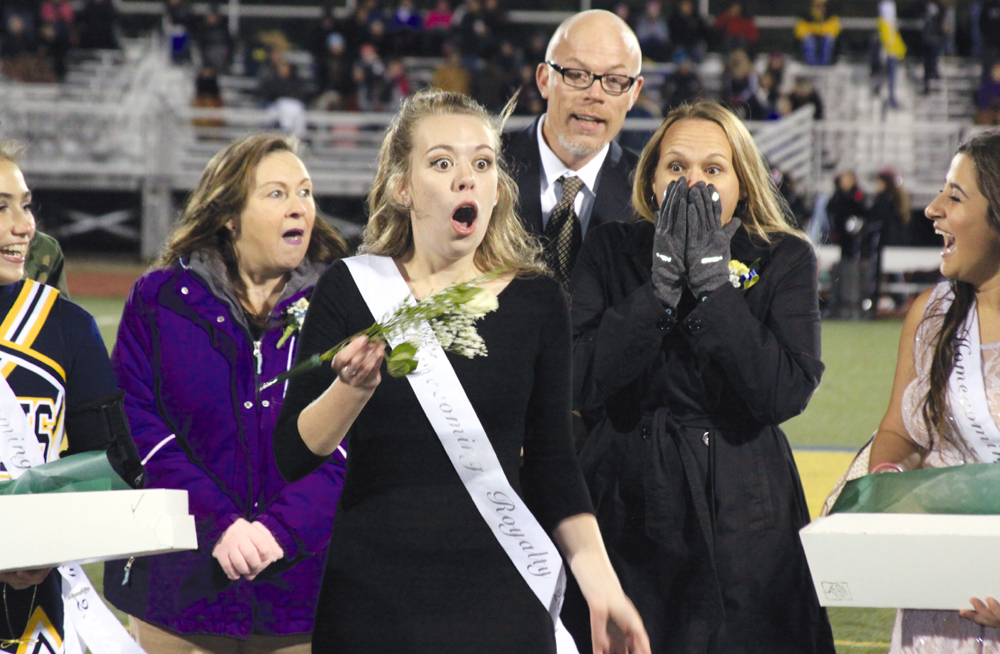 Simply the Best
October 16, with her parents looking on, Samatha Best realizes she has the white rose and just became Wayne Memorial’s Homecoming Queen.

Holiday Window Contest
Wayne Main Street announces their 2nd annual Holiday Window Display Contest for businesses located in the Main Street District.  If you have a business in the district, put up lights and decorate your windows for the winter holidays.  There will be two awards given: People’s Choice to the window that gets the most likes on facebook during Wayne Main Street’s voting period and Judge’s Choice to the window a small group of Main Street volunteers choose.  Last year, 10 businesses participated and it is hoped that more will join in this year.  Even if you are not within the Main Street District, it is hoped you will decorate and light up your store windows and help Wayne glow for the holidays.
Healthy Wayne Coalition
The next meeting of the Healthy Wayne Coalition is Thursday, November 19, at 8:30 a.m. to 10:00 a.m. at HYPE Athletics in Wayne.  Come enjoy a healthy breakfast while giving your input on how to make Wayne a healthier place.  Healthy Wayne is sponsored by Beaumont Hospital. Wayne is one of 4 cities in this special program.  Healthy Wayne is in its early stages of planning and can use input from more community members.
Wayne Police Department receives grants for radios
The City’s grant writing team just received word that the grant they submitted to Lowe’s for police radios has been awarded to the Wayne Police Department. This grant coupled with a recent grant from the Ford Fund (with help from the Wayne Rotary) will certainly help to keep our officers safe. Congrats to the Wayne Police Department! (Total for radios to date with grant awards: $31,950.85)
Holiday night at the museum
On Saturday, December 5th, from 6:00-7:30 p.m., please join us for the Christmas Tree Lighting Ceremony taking place at the Wayne Historical Museum. There will be musical performances by the Wayne Memorial High School band and choir, a visit from Santa Claus, activities for the children, free coffee, hot chocolate and cookies provided by McDonald’s, Biggby Coffee, Baker’s Acre and MI Works! We want to thank our partners, the Wayne Rotary, Wayne Main Street and the Wayne Chamber for their help with the planning efforts. Also, thank you to our sponsors for your kind donations.
Small Business Saturday
Join Wayne Main Street and American Express as they promote Small Business Saturday, held yearly on the Saturday after Thanksgiving.
The event will kick-off this year at 10 a.m. Saturday, November 28, at the new Biggby in Wayne.  Pick up a passport, a totebag and other goodies and get ready to shop.  Wayne Main Street will be at Biggby from 10 a.m. until noon.
After you are done shopping and supporting your local Wayne small businesses, you can take your purchases to the Historical Museum until 3 p.m. and get them gift wrapped for a small donation.