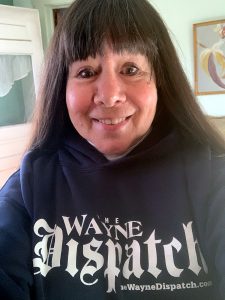 By Carolyn Marnon – It started with a really bad headache. Susan Powers thought the headache might be due to allergies. That didn’t stop her from going next door to have corned beef and cabbage with her son and his wife for dinner.  During dinner, her son mentioned he wasn’t feeling well and complained that he couldn’t taste the food. It was at that moment that Susan noticed she couldn’t taste it either.
The next day, Susan woke up with a bad fever. She says she ached everywhere.  Since she and her son had not yet gotten flu shots, the family thought they both just had the flu. With a 102 degree fever, Susan was also coughing, achy and felt exhausted.
She began emailing with her doctor about her symptoms. The next day, her doctor told her to go to Beaumont Dearborn where she was swabbed for COVID-19.
Her daughter-in-law then came down with the symptoms of the coronavirus. Although Susan, her son and daughter-in-law were all extremely sick, Susan was the only one who had a confirmed case. Due to her age, she was able to get the test while her son and daughter-in-law were not in a high-risk category to get swabbed. The confirmation came 11 days after she had been swabbed.
The whole time she suffered, she was using Tylenol and Mucinex to help relieve the symptoms. Her fever lasted four days. All of her joints ached. “I was just exhausted, and all I wanted to do was sleep.  That must have been when my body was healing. I have not left the house since March 16,” Susan says. The first week, Susan says she was so tired and sick. On the 12th or 13th day, she says she started to feel better.  She was no longer having to take a nap all the time. She was no longer achy. She felt stronger and better every day, finally being able to go outside and walk along the river to enjoy some fresh air and sunshine.
She will soon be contacting the Red Cross. Her doctor has been in touch with the Red Cross who is possibly interested in using her blood antibodies.  This is a new process that is being developed using the blood of someone who has already had the virus.  Susan didn’t know much more beyond that.
Although Susan was not hospitalized, she did have to watch her breathing. She said she was told that most people who have to be hospitalized end up going in on Day 6 or 7 of the illness.
As a social worker for Starfish Family Services, Susan runs a teen parenthood program while working from home. She checks in with the young moms and reaches out via social media.
Susan says her lungs are healthy, she leads a healthy lifestyle and she tries to work out 3 days a week. Now, she says, “I really appreciate truly feeling healthy now. My family calls me an Energizer bunny.”
Luckily, Susan’s husband did not get sick from COVID-19. Although they live in the same house, he isolated himself from her.
The worst part of having COVID-19 was “being so tired and being a little bit afraid. You hear everything on the news, and I was so afraid.  The fear of the unknown. I didn’t anticipate being sick for so long. I was sick for at least 10 days. I couldn’t do the normal things.”
A representative from the Michigan health department has called her to get her story. The rep told Susan that of the 200 people she has already spoken to that had the virus, Tylenol and Mucinex are what has really helped them all.
Although her daughter-in-law still has a bit of a cough and is still feeling rundown, Susan says “I can tell I’m feeling better because I’m looking at all these projects I want to do.” She also says she hasn’t had to take any Tylenol or Mucinex for the last three days.
Susan has no idea where any of them got the COVID-19. She also mentions that she didn’t even know that not being able to taste food was a symptom that has been associated with it.
The Energizer bunny’s batteries are being recharged. It won’t be long before Susan is back in the community living life at full power.