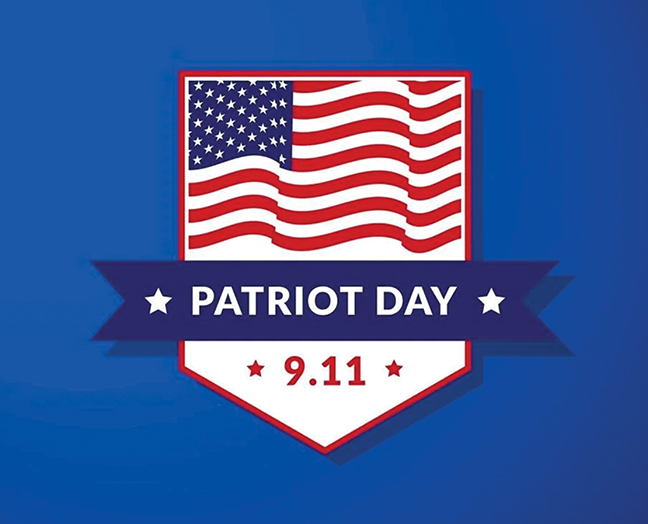 By Sarah Shurge – September 11th, 2001 is more than just a day in the history of the United States.
Some people went to work that day and never came home. Some people lost family members. Some people were terribly injured. Some people were first responders and saved lives that day.
Regardless of where you were that day, all people were impacted by the attacks that day.
Every year for the past 20 years, we have taken the day to remember what happened.
Now for the 20th anniversary, Paul Sposite, Grand Knight of the Knights of Columbus Notre Dame Council 3021, had a different idea of how to remember that day.
Sposite, along with the other officers of the Knights Council: John Albrecht, Paul Law, and James Krzyskowski, decided to honor our local heroes (military veterans, police officers, fire fighters, doctors, and nurses) by throwing a Patriots’ Day Celebration on September 11th.
“We want to honor the first responders for their heroism,” said Sposite, main organizer of the event. “We chose the 9/11 anniversary to do so because that’s the day America thought of them as heroes. We thought it was a good way to show we appreciate them and their dedication to the community.”
The celebration will begin at 12 p.m. on September 11th in the lot next to Notre Dame Hall on Wayne Rd.
There will be three parts to the event.
The first part is the ceremony that begins at noon.
The ceremony will have participation from the Boy Scouts Troop 271, Fourth Degree Knights of Columbus Honor Guard, Plymouth Drum & Fife Corp., and Bikers for Vets. Along with speeches from Wayne Mayor Rhaesa, Westland Mayor Wild, Representative Coleman, and the Knights of Columbus.
The second part will be a break around 1p.m. or 2 p.m. to enjoy the activities.
There will be a First Responders Lego Display done by Wayne resident Chris Leach, and a play area for the kids. Old Betsy will be on display, the Wayne Historical Society pop-up First Responders Museum will be there along with free photos from Click Flashroom Photography.
The Flag Shop will also be there where you can drop off your old flags for retirement and pick up new patriotic items.
T-Shirts and bracelets will be available for purchase. Proceeds go to the Wayne Veterans Memorial, the Westland Veterans Memorial, or Knights of Columbus for the Gary Sinise Foundation.
The third and last part will be a concert around 2 p.m. or 3 p.m.
Dawn Marie Mio will be performing patriotic freedom music, country songs, old rock songs, and standards.
There will be outside seating. Bring your own lawn chair or blankets for the concert.
The event and activities are free to the community. Everyone is invited to come.
“I’m looking forward to a large crowd for the first year event, and to engage the community,” said Sposite. “It’s a good way to give back to the community via this event and the donations we collect. The fact we can honor those that have gone before us in the name of freedom.”
The kitchen and bar will also be open for food and drink to be purchased.
“The goal is to make this an annual event the community looks forward to,” said Sposite. “It’s important to remind people that they [first responders] are essential and they are true heroes that put their lives on the line. This is something that needs to be memorialized every year. We should never forget and we should honor those that lost their lives.”