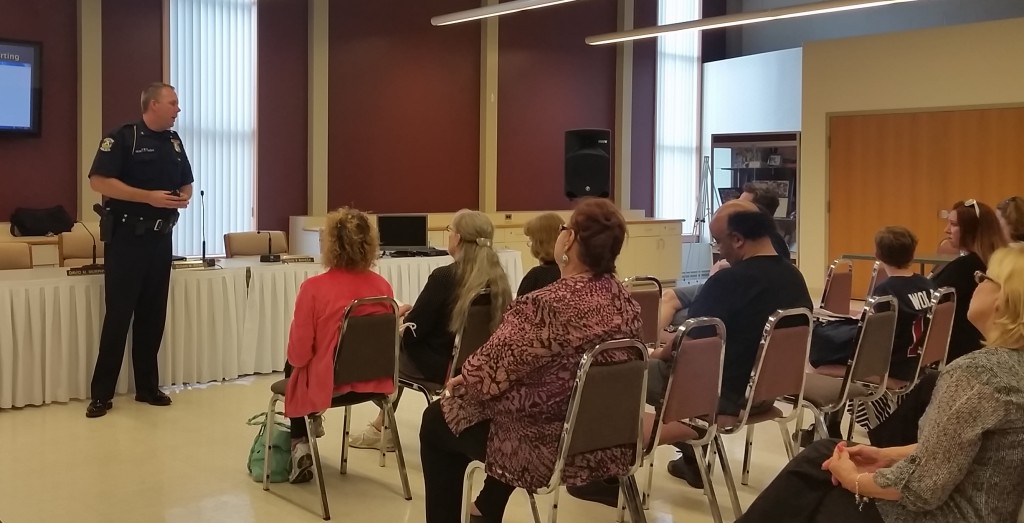 By Carolyn Marnon –
Twenty-three residents attended the 2nd meeting hosted by the Wayne Police Department to educate the public on police department policies.  The goals of the monthly meetings, held on the last Thursday of the month, will be to foster transparency, trust and a positive relationship with the community; to provide better service; to educate citizens on police department operations, and to provide useful information to the community.  “The police department, in general, has to have a relationship with the community,” said Police Chief Al Maciag.
Twenty-four officers are provided for in the 2015/16 budget.  The department currently has 22 officers. Of the 22, 3 are injured and 1 is at training, meaning only 18 officers are coming in to work.  Officers work 12 hour shifts in Wayne.
Any call to 9-1-1 is dispatched through the Westland Police Department.  Non-emergency calls come in to the Wayne department and are routed through a Police Service Aide.
The Online Citizens Police Reporting System is now available through the city’s website. It is recommended that any basic crime be reported using this system. If you don’t have a computer at home, you can come into the police department and use the computer in the lobby.  By utilizing this system, a police officer does not need to be taken off the road to take a report thus making better use of their time.
Crimes in Wayne in 2015 to date include 198 traffic crashes, 23 residential burglaries, 11 other burglaries, 63 larceny crimes (involving vehicles, parks, buildings but not residences), 28 motor vehicle thefts, 1 arson, 15 robberies (not to be confused with burglaries where property is taken from a residence, robberies occur when property is taken from a person), 36 damage to property crimes (such as slashed tires or rocks through windows), and 139 assaults (involving pushing and/or hitting).
Recent crime trends are strong armed robberies, utility burglary (when someone represents themselves as from a utility such as the phone or electric company to gain entry into your home), and vehicle thefts.  It is recommended that you don’t leave your car running even if you are just running in somewhere real quick and to lock your vehicles.  “Criminals want things to be easy,” said Sgt. Matthew Spunar.
Chief Maciag is trying to reestablish neighborhood watch groups and incorporate the monthly community meetings as part of the program.  He noted that he can’t provide an officer for every meeting for every group that is established.  Community involvement at these meetings can help with that.  Groups can be as active or inactive as they want to be. The police chief would like to implement a system where he can get important information out to neighborhood groups in a timely manner. In the meantime, neighborhood watch patrols should just observe and report.
Questions were collected before the meeting and addressed.  These included how parking complaints are handled (the police can contact the person to move the vehicle or issue a ticket), what to do about unsupervised children in the park (call the police;  only if the child is in immediate danger should you step in as parents might have a different image of what is dangerous than you have), teen curfew laws (under 12 years old, curfew is 10pm; under 14 is 11 pm, under 17 is midnight, 17 and older have no curfew; breaking curfew is an ordinance violation), and the effectiveness of park patrols (citizens would need to go through liability training if this were to happen because anything attached to the police department could be a liability to the city. “We have to watch everything we do,” due to the media said Chief Maciag. With the July 4th holiday approaching, it is important to note that fireworks are not allowed between midnight and  8am and are only allowed on the day before the holiday, the day of the holiday and the day after.  You can voice a complaint about someone lighting off fireworks, but if a police officer does not witness it, he can’t arrest anyone. He can only write a report.  He needs an eyewitness for the complaint to go to the city prosecutor.  Sky lanterns are prohibited in Wayne.  They are not illegal to sell, only to send off.
The next community public safety meeting will be Thursday, June 25, at 7 p.m. at the Wayne Activity and Banquet Center.