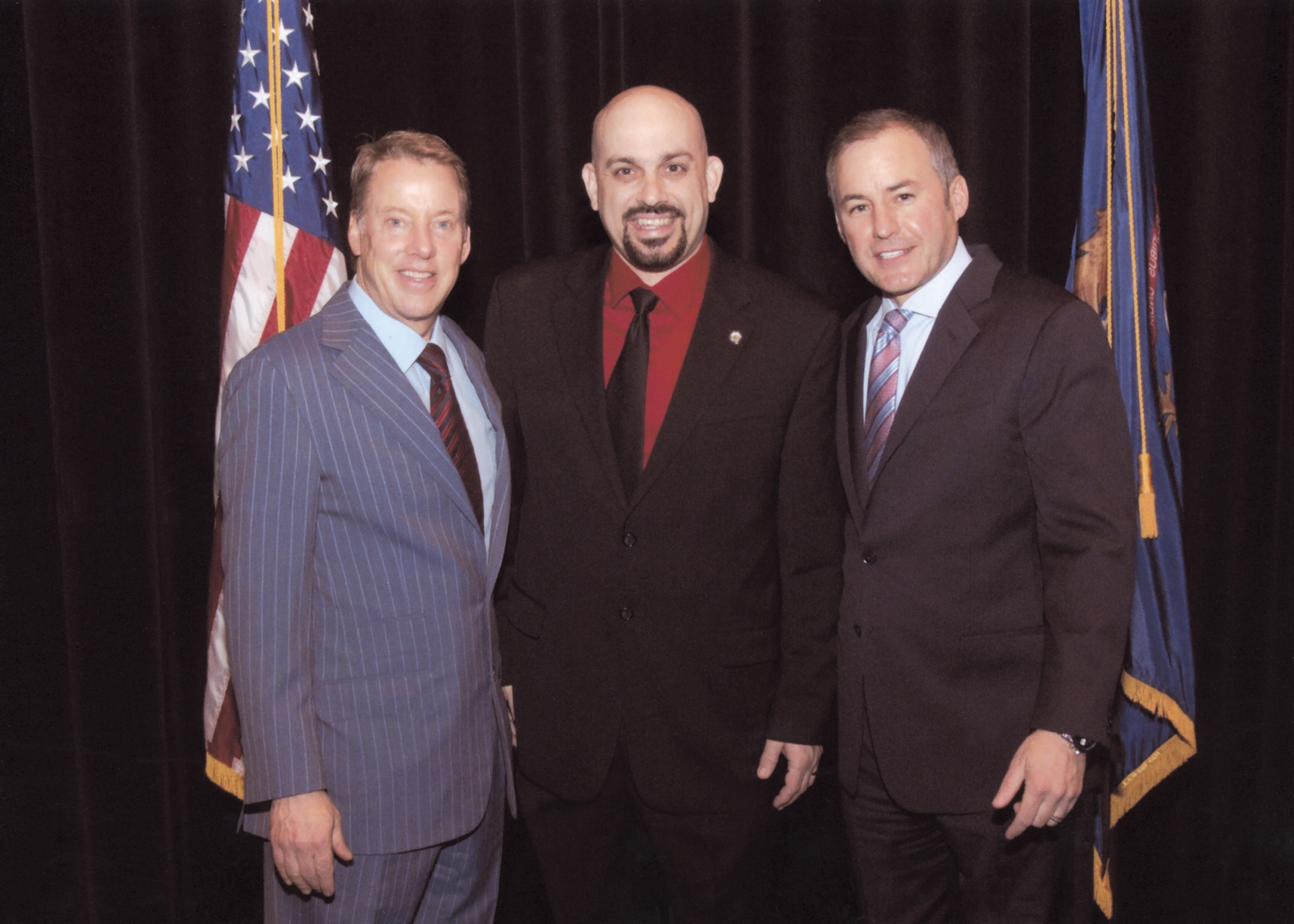 William Ford Jr. , Councilman John Rhaesa and Westland Mayor Bill Wild at event in Wayne County. Ford said about Wild, “As a businessman, I’m always attracted to people who get things done. Mayor Wild did a great job in Westland. That’s quite a feat, to reduce costs while putting some money away and enhancing services at the same time. That’s why I think my friend, Mayor William Wild will make a great Wayne County Executive.”

The most hotly contested race on the Aug. 5 primary ballot is the Wayne County Executive race. Incumbent Robert Ficano is facing nine challengers in the democratic primary. They are Phil Cavanagh,  Cindy Darrah, Warren C. Evans, Russell George Leviska, Kevin M. McNamara, Bettie Cook Scott,  Sigmunt John Szczepkowski, Jr., William R. Wild and Christopher Wojtowicz.
Candidates have had the opportunity to spread their message at a candidate forum at Henry Ford Community College and submit questions to the League of Women Voters.
Phil Cavanagh is currently in his second term as state representative. He has a Bachelor’s degree in accounting and business administration; a Masters in business administration; a Juris Doctorate from the University of Detroit Mercy School of Law; and is a Fellowship Graduate from the John F. Kennedy School of Government, Harvard.
He said, “I am running to restore Wayne County to the economic engine our state, and to ensure that Wayne County is a safe and productive place for my three daughters. The people of Wayne deserve leadership they can count on, and I am confident that I have the experience and the educational background to put our county on the right path.”
Warren C. Evans  is a professor at Wayne County Community College and former Detroit Police Chief and former Wayne County Sheriff. He received his bachelor’s degree at Madonna University in Detroit, and later earned a Master of Arts degree in Criminal Justice at University of Detroit-Mercy. Evans attained his Juris Doctor degree from Detroit College of Law in Detroit, Michigan.
He managed a $150 million budget and 1,300 employees as sheriff. As police chief he said he helped reduce violent crime by 27 percent.
Evans said, “Wayne County needs a leader who will come up with a plan, who will be collaborative and who is good at managing and getting results. That’s what I will bring to Wayne County as the executive.”
Robert A. Ficano is the current Wayne County Executive. He has a Bachelor of Arts degree in social science from Madonna University and a Master of Arts degree in criminal justice and a Juris Doctor Degree from University of Detroit.
He said, “I seek to build on my successes of leading the establishment of a regional authority to expand the Cobo Center and save Detroit’s Auto Show, and creating the Aerotropolis Authority around Detroit Metro airport that has attracted $600 million in investment while creating over 5,000 jobs in the last year alone. Not forgetting that the people have entrusted me to work in their interest, I respectfully request your continued support for County Executive. Together we can continue to bring investments so our graduates can find jobs here that help keep families together.”
Kevin M. McNamara  has served as Wayne County Commissioner since 2006. He represents Belleville, Huron Township, Romulus, Sumpter Township, Van Buren Township, Wayne and a southern portion of Westland.
On his website he said, “I have grown frustrated with the direction this county has headed. As a commissioner, I lack the power to instill real change, and therefore seek to affect change as county executive. There needs to be a reinvention of county government like there was in the 1960s and 1980s. Together, we can reinvent Wayne County government through a new model that will be strong for at least the next 20 years.”
Bill Wild has served as the mayor of the City of Westland  since 2007. Bill Wild has brought more than over $200 million in new investments to Westland.
He is also the owner of Scrap Busters, an automotive recycling business in Wayne that just celebrated their 25th anniversary. He and his wife have three children.
He said, “I am running for Wayne County Executive, because Wayne County families deserve a county government that reflects their values and provides core services efficiently and effectively. When I became Mayor of Westland, the city was headed towards bankruptcy. Today, Westland enjoys a $5 million surplus. I know I can do the same for Wayne County. It won’t be easy but I believe if we work together we can get Wayne County’s finances in order.”
Christopher Wojtowicz, lives in Hamtramck. He is employed by Wayne County as a Claims Investigator in Risk Management and has previously worked for AAA and Farmers Insurance. He has two sons.
Wojtowicz has said Wayne County needs streamed operations, communication and service to each citizen.
In his League of Women Voters questionnaire he said, “We are in need of leadership that will show by example that Wayne County doesn’t need a Financial Manager, just a plain responsible leader.”

What are the top three
priorities facing Wayne County?

Phil Cavanagh said fiscal responsibility, public safety and restoring integrity.
Warren C. Evans said better budget management and deficit elimination; ensuring that the prosecutor’s office and the sheriff’s office are funded properly, so that we can again address the quality of life; and addressing the population loss.
“We need to seriously change the paradigm in Wayne County and how we govern,” Evans said.
Robert A. Ficano  said attract and retain investment to grow jobs and improve our property tax base, continue efforts for fiscal stability and continue strong environmental work to protect quality of life.
“My first priority is to run the administration with fiscal integrity and job creation,” Ficano said.
Kevin M. McNamara said Wayne County Jail, public safety and balancing the budget.
“Wayne County government has become a dinosaur. It is old and bloated and it feeds constantly to sustain it self and we the citizens seem to have to put up with the services that come out the other end for too long,” McNamara said.
Bill Wild said the Wayne County budget deficit,  returning trust to county government with strict ethics standards, rigorous fiscal accountability, and transparency in all government departments and working with Mayor Duggan and other Wayne County mayors and township officials to improve public safety and fight blight.
“I think we can do better. We have been defined by scandals and greed.  People around the county want and need better leadership than they have been given,” Wild said.
Christopher Wojtowicz said opening the records to all and fixing the financial and structural deficits.
Voters will get to choose one Democratic candidate to face the Republican challenger in the November election.

What’s on the August Primary Ballot?