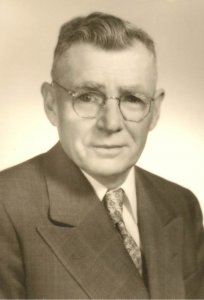 By Darlene Hawley – Last fall, Mathew Mulholland, the youngest child of Bill and Phyllis  Mulholland spoke at a meeting of the Wayne Historical Society in our historical museum at 1Towne Square in Wayne.  The meeting was well attended by members of the Society as well as the public.  All were eager to hear Mat’s first hand story about his family’s business which was a landmark in our community for many years.  Anyone who grew up in Wayne or lived here during the years that our village/city had a thriving downtown area with every kind of retailer you could imagine, will remember Mulholland’s Dry Goods Store.  Everyone in town shopped at Mulholland’s.  They had everything you needed in the line of clothing, material, shoes, uniforms, baby clothes, purses, hats, suits, ties, dresses and much more.  Mat shared information about how his grandfather started the business, his father grew up in the business and he and his nine sisters and brothers worked in the store as they grew up.  It is a wonderful story about a family’s dedication to their store, its employees and the people of Wayne.
William R. Mulholland Sr. was born in 1888 in Hanover, New Jersey.  As a boy he worked in ware houses and as a young man was a traveling yard goods salesman.  He joined the Navy in 1917 and served during WWI until 1919.  He then migrated to Michigan where he had a cousin who had a store in Birmingham.   Mulholland  then settled in Wayne where he liked the community and recognized a need for a dry goods establishment. On March 29, 1919, he opened Mulholland’s Dry Goods Co.  He employed one clerk to assist him.   The store was in the “Hoops Block”, a large brick building built in 1908 by Frederick, John and Edward Hoops.  It was located at the corner of Michigan Avenue and Monroe Street.  The roads surrounding the store were dirt and hitching posts stood out front to accommodate horses and buggies.  Mulholland borrowed money to get the store started.  He saved all of the boxes from stock shipments for six months because people told him that the store would never survive and he would have to send goods back.  But the store thrived.  At that time all stock was kept behind the counter and shown one piece at a time to the customer by a clerk.  Mulholland believed in giving the customer special attention and treating everyone the way he wanted to be treated.  The staff knew customers by name and let people charge items (before credit cards) and pay later. 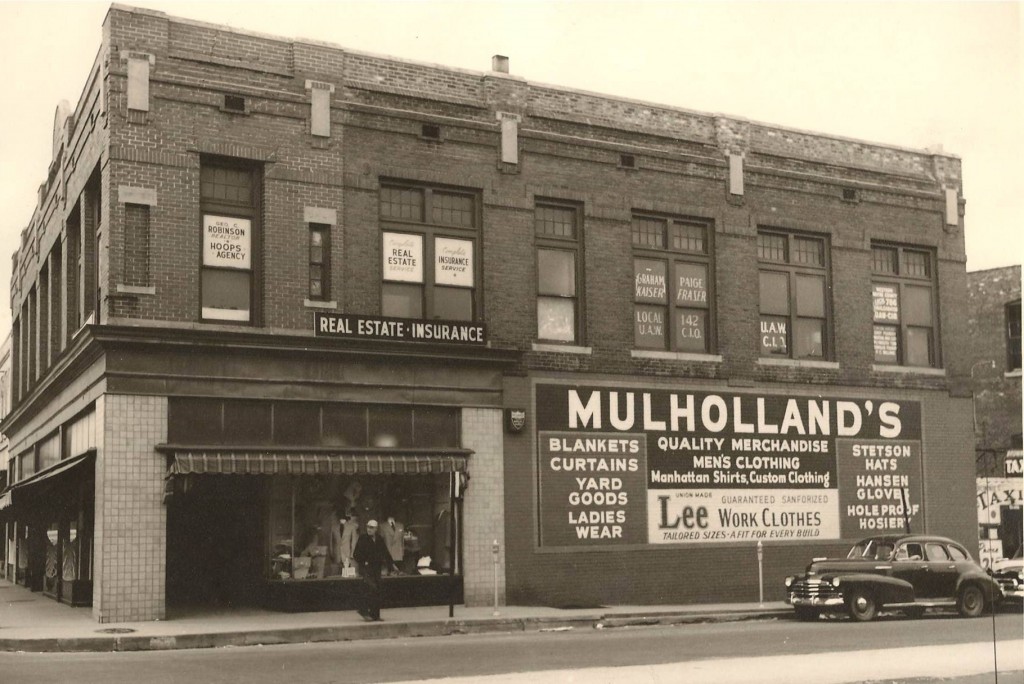 Original Mulholland’s location on Monroe Street in the Hoops block.

In 1921, Mulholland added a women’s department and a babies department.  A men’s department followed in 1924 headed up by Mr. Fred Newbrough.  During the 1930’s and 40’s the service philosophy did not change but self service displays and merchandising techniques started to transform the dry goods store into a true department store.  As the store grew, it expanded by moving into other parts of the Hoops Building,  replacing other stores.  The basement was opened where merchandise was sold, including boy scout and girl scout uniforms.
Mulholland passed along to his family not just his business philosophy but a real love of the community of Wayne and its people.  He was totally committed to Wayne.  In those days there were many large clubs and organizations that served the community.  He served as a member and or officer of such organizations as Wayne Rotary, The American Legion of Wayne (Post 111), The Chamber of Commerce,  The Knights of Columbus, The Elks,   The Board of Directors of Wayne Bank, and The Michigan Retailers Association.  He was very active in the St. Mary’s Parish for many years.   William R. Mulholland Sr. retired in the mid 1950’s after turning the business over to his son.  He died in 1959.
Mat’s father, William (Bill) R. Mulholland Jr. started working at his father’s store when he was twelve years old.  He emptied trash cans, washed windows and swept the floors.  (All ten of his children would take on these chores at the store when they were of age.)  When he was in high school he worked at the store in the summer making 50 cents a day.  After high school, like his father, he joined the Navy and served his country during WWII.  Following the war he attended the University of Detroit and graduated with a business degree in 1950.  Bill then became a full time employee of Mulholland’s Dry Goods Store.  He was often quoted as saying, “The experiences (of growing up in the retail business) teach   the way to run a store, but education helps in learning to make decisions.”  Bill Mulholland ran the business after his father retired and followed in his footsteps, becoming involved in many clubs and organizations in our community as well as St. Mary’s Church.  He ran the business until 1970 when an early morning fire broke out and caused extensive damage to the store, merchandise and building.  The store would have to move.   Urban renewal eventually demolished the Hoops building,  but  Mulholland’s Dry Goods Co. lived on.  In 1971 Mulholland moved the store into the new shopping mall built on Michigan Ave. and Elizabeth Street a block west of the old store.  Metro Place Mall eventually housed other downtown stores some of which were closed due to urban renewal.  Gladstone Shoes,  Lazar’s,  Shifren Williams Jewelers,  A&P Grocery Store and others filled the Mall.  Things were changing for downtown retailers but service to the people of Wayne was still offered.  Many store employees moved to the new store and served customers there.   Long time residents of Wayne will remember Fanny Eberline,  Janet Cooper, Margaret Kelly, Jim Collins, Opal Tanner, Terry Warden, Darleen Willis, John Jeeter, Virginia Livingston, Marie Wilson and Bill Johnson, all devoted employees of Mulholland’s store.    In his speech at the museum,  Mathew closed by saying  “Employees were part of the family.  William Mulholland  Sr. and Bill Mulholland  Jr. would both tell you that the store was successful because of the quality of our staff as much as the quality of our inventory.   Our staff and our customers made us successful.”   Many of you who remember shopping in downtown Wayne years ago have fond memories of Mulholland’s.  The wooden floors,   the many departments,  the displays,  the friendly faces of the employees.  And then the new store in the new mall came along!  Same quality of inventory,  just the right gift from the baby department for a new baby,  a varsity jacket for a high school student,  material and thread for a new dress.  Mulholland’s was successful in the new mall for  15 years.  The store closed in 1986. 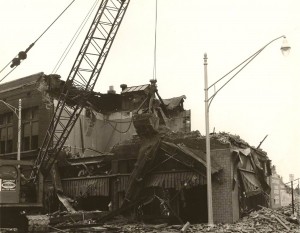 Bill Mulholland and his family continued to live in Wayne and support the community.  Bill passed away in 2009 and is fondly remembered by the community he served and loved.  His wife Phyllis and a number of their children still live in the area, including Mathew who,  like his father and grandfather, is committed to his community.  He served on our City Council as well as on many local committees.  He  has been very active in the care and cleaning of our Rouge River  through the  Rouge Rescue Program and Friends of the Rouge.  Each year he helps organize the community event “Rouge-A-Palooza”  which celebrates our city and the Rouge River which runs through it.  He is also a member of Main Street and is soon to be on their Board of Directors.  Mathew is on the finance committee at St. Mary’s church and serves as MC at their annual Trivia Night Fund Raiser.  He is a real champion of the City of Wayne.
Over time all things change.  One event that dealt a blow to many small town retailers across our state and country was the opening of huge indoor malls housing a large variety of small specialty stores as well as large department stores and national retailers.  They were built outside of cities along large highways making them easy to get to and offered one stop shopping for everything on your list.  People were still banking in their small towns and going to church and their barber shops,  but they were shopping in the giant malls. Over the last few years  technology has changed our lives  and  continues to change  the way we shop.   Many people shop on line and have  products shipped to their  door.  We shop by phone and order products we see demonstrated on TV,  we can order  groceries and have them delivered or order hot food delivered by restaurants.    Some are even talking about having drones deliver  goods to our homes!!!  Who could have imagined it a few years ago!   But, regardless of how we shop, people still look for what the Mulholland’s Dry Goods Store offered –  good friendly service and quality products.
(Thanks to Mathew Mulholland for the information in this article and for taking the time to answer my questions.) 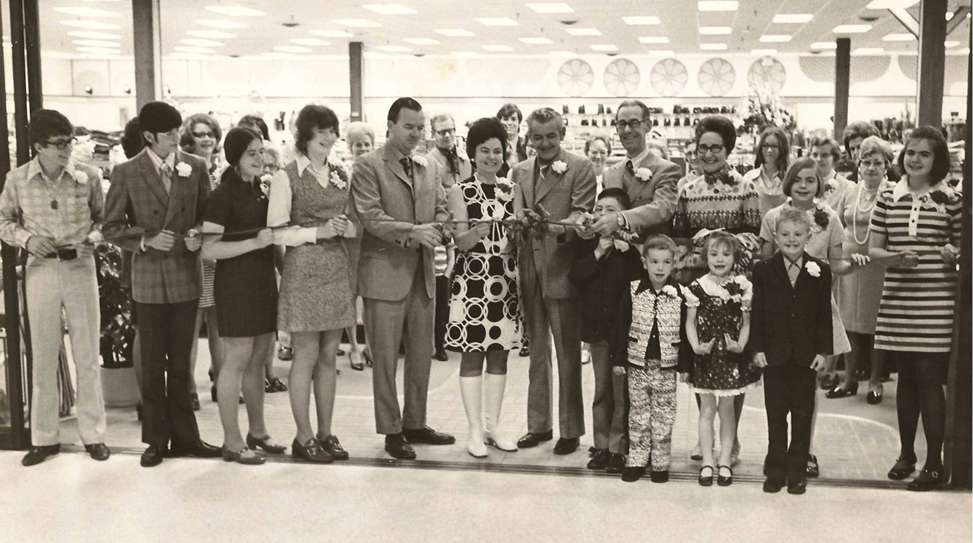 Community to vote in August to restore public safety in Wayne