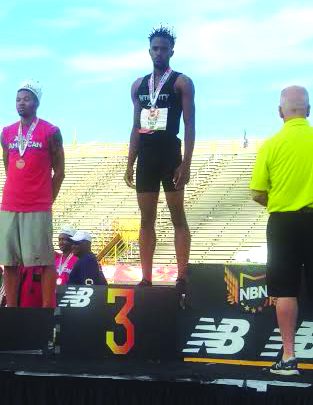 Montel Hood – Currently holds the state record for the 400 meter dash and recently placed third at Nationals in the 400 with a time of 46.66 seconds.

By Carolyn Marnon – As he races around the track at Wayne Memorial High School, you can see lightning shooting out from Montel Hood’s running shoes.  Maybe it was just the sunlight hitting the soles of his shoes that fooled the eye into thinking one was seeing lightning bolts.  Either way, this young man is fast.  So fast that he currently holds the state record for the 400 meter dash and recently placed third at Nationals in the 400 with a time of 46.66 seconds.
Just who is Montel Hood? At 18, he’s a 2016 WMHS graduate who is hardworking, loyal to others, “truthful to myself, and I won’t stop until I get to my goals.”
Montel’s sister, 17 year old Anavia (pronounced A-nay-vee-a) Battle is a runner like her brother. Together, they are members of Intensity Track Club at the high school.  Intensity is made up of 15 students, not all from Wayne Memorial, who are team players and have great work ethics. They are more serious athletes who are willing to give up their summers to get better at their events.  These athletes eat healthy, drink plenty of water and stay focused on their goals.
Montel and Anavia come from a family of runners.  Their grandpa ran track.  They used to race up and down their block to see who was fastest.  “My older brother was fastest,” says Montel. The siblings have the same parents, but their mom and dad never married.  Montel took his dad’s last name while Anavia took her mom’s.  Anavia likes her last name, “I think it’s kind of cool,” she commented as she also mentioned how people will tell her she really battled out there on the track. Why do they stay in track?  “It’s fun, no matter how bad it hurts,” says Anavia.  Montel stays to “meet new people, stay in shape.”  When asked what his biggest challenge has been, he replies, “Besides myself?” “His mental strength,” interrupts his coach, Jamal Johnson.  “What would it be, coach?” Anavia asks Coach Johnson about her biggest challenge.  He says it’s accepting that she’s really good. She tries to be an open-minded, positive person, but her biggest obstacle is herself.
Anavia took 2nd place in the 200 meter dash at States and had the fastest legal times in the 100 and 200 meter dashes up until then. She said someone beat her by a toe.  A legal time is when there is no wind assisting you while running.
The brother/sister running duo are close. “We have a very close bond. We’re best friends,” says Anavia. “No matter what happened the day before,” adds Montel.
While Anavia still has another year of running for Intensity Track Club, Montel is headed off to South Plains College in Levelland, Texas to run.  He’s looking forward to the weather there as the weather in Michigan is treacherous cold and “that’s like my worst enemy.”  It will be interesting to see what the future holds for him in a city named Level-land.