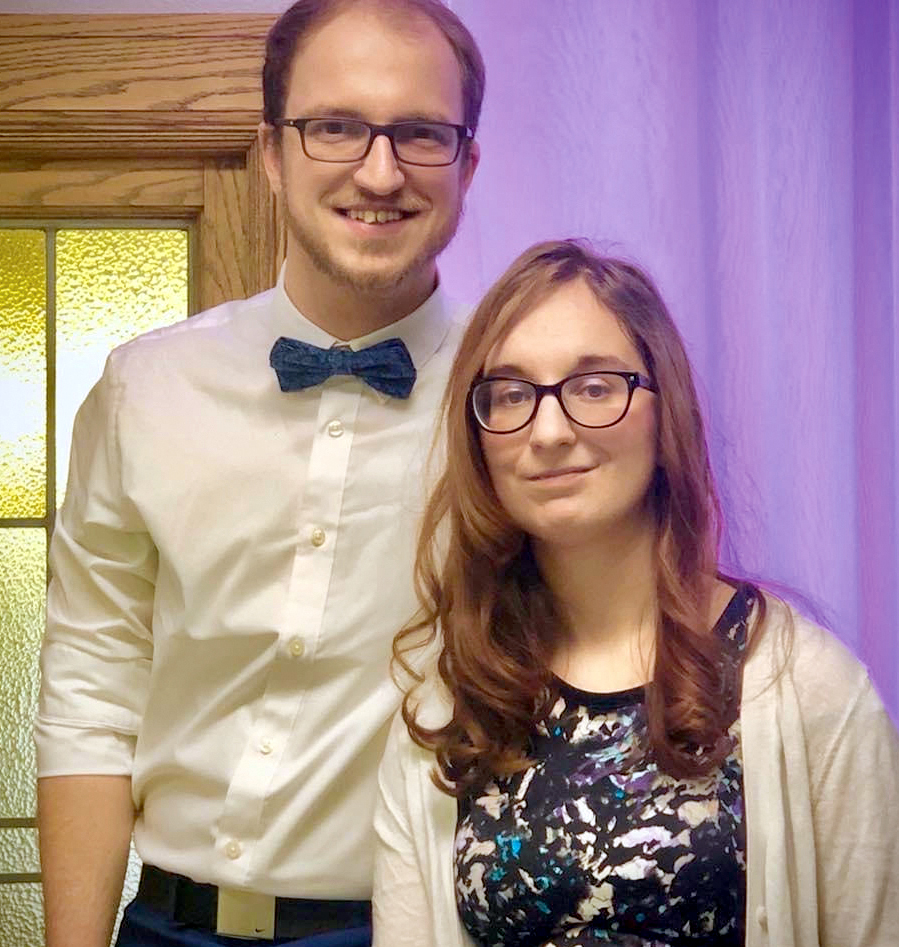 By Carolyn Marnon – There was going to be a huge wedding at the church in Warren, Michigan where Wayne resident Ashley Herald’s father is the pastor.  There would be all the pomp and circumstance that comes with a dream wedding. The flowers, the decorations, the bridal party, the bride in a white dress walking down the aisle escorted by her father, all the people who loved her and her husband-to-be in attendance and then the big party afterward. It was the moment the young couple had been looking forward to for a year.
Ashley Herald and Brad Hinken met when they were 16 years old at a campground in Wixom.  Brad was camping there when a mutual friend brought Ashley along. Brad says Ashley likes to tell the story that she was interested in him at the time, but that he was a stupid teenage boy who was into other things.
Forward to September 2018. Brad and Ashley had been friends on social media. Brad was bored one Friday night and messaged Ashley. They ended up staying up all night messaging and talking. “She’s been putting up with me literally every day since,” laughs Brad.
On March 29, 2019, Brad and Ashley became engaged. They started planning their dream wedding with no idea of the pandemic that was to come the following year. They chose March 28, 2020 as their wedding date.
Brad works at The Henry Ford as an exhibit specialist working with permanent and temporary installations. Ashley is an inpatient clerk at University of Michigan hospital working in the bone marrow transplant area.  While the nation, and the world, is dealing with the spread of COVID-19, health care workers are on the front lines, risking exposure every day. “She’s been holding up pretty good,” says Brad. He says about a week before their scheduled wedding, Ashley came in close proximity to a confirmed COVID-19 patient. She had to be tested. Luckily, she is COVID-19 negative.
Those were unsettling days before the wedding. As much as Brad and Ashley wanted to have the big dream wedding, they also knew now was not the time. However, they still wanted to get married.  On Saturday, March 28, the two lovebirds gathered with their immediate families at Hill Crest Bible Church in Wayne where Pastor Seth McDonald performed the wedding nuptials. It was a simple wedding. Ashley didn’t wear her white wedding dress. Brad didn’t wear his suit. There was no unity sand and no decorations. The post-wedding meal consisted of pulled chicken sandwiches, coleslaw, bags of chips and cans of pop.
The couple is celebrating their honeymoon at home, not at the air bnb in Traverse City as planned. They’re just hanging out together. Ashley has been home from work for the honeymoon. She is a little nervous to go back to work next week, especially since she also suffers from asthma.
Although the wedding was not what they originally had planned, they are not letting that get their spirits down. They have postponed the big wedding with all the works for August 22. That is the day Ashley will walk down the aisle on the arm of her father while wearing her white wedding dress.  Brad will see her in that dress for the first time as will all their beloved guests. “We have so many people in our lives we are blessed to know and be around,” said Brad. “We’re ‘people’ people.”
And what happens if the COVID-19 pandemic has not passed by that time?  There is no back up plan. “We’re the type of people that just roll with it,” says Ashley. In regards to the original wedding plans being affected, she says “At first we were kind of sad, but we just figured out another plan.”  Brad adds “We want them (the guests) to all be safe, of course.”
Brad finished the conversation by adding “What an awesome story this is going to be. How much fun to tell our kids and grandkids about this. The whole experience was not what we had planned.”
It may not be what they had planned for their official wedding day, but the couple is now united in holy matrimony and can start their own happily ever after.

Free breakfast and lunch for children