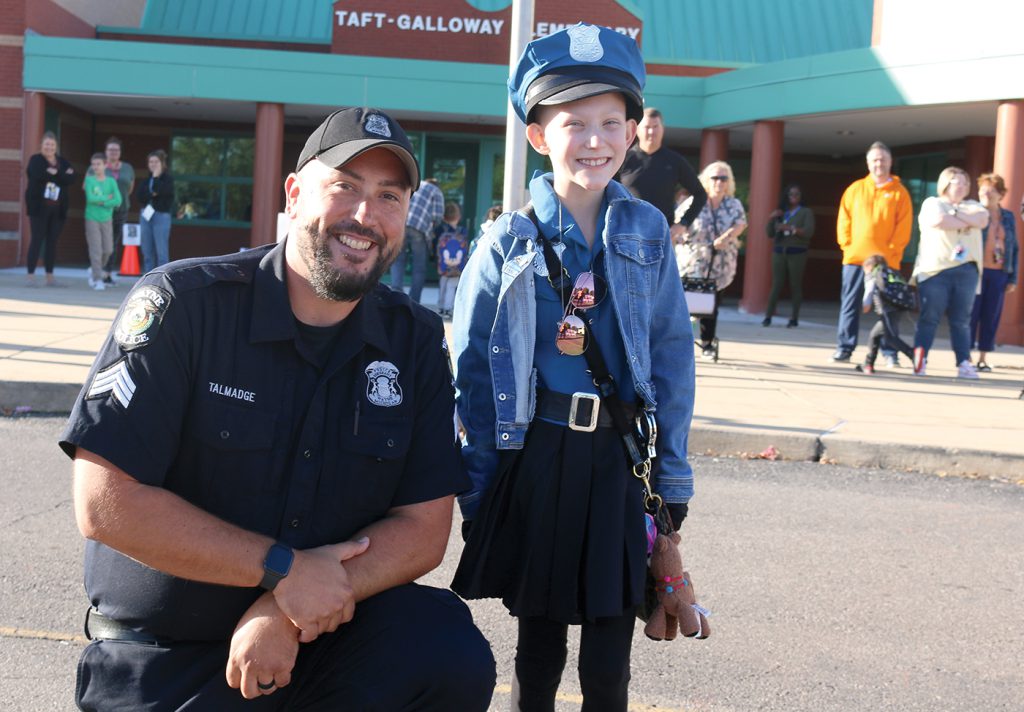 Sergeant Talmadge and Abbi in front of Taft-Galloway Elementary School.

Wayne resident Trisha Custer awoke the morning of Thursday, September 22, 2022, with a secret.
It was her daughter Abbigail’s eleventh birthday, and the Wayne Police Department was mere moments away from making one of Abbi’s biggest dreams come true.
Nowadays, it is not uncommon for a video game or an electronic device to top a youngster’s list for most requested birthday gift. But Abbi, who attends Taft-Galloway Elementary in Wayne, was after something entirely different. She wanted a unique—and very specific—experience.
And, frankly, after everything Abbi had been through in the past year, she rightfully deserved it: In early January, Abbi was diagnosed with stage 2 rhabdomyosarcoma (RMS), a rare form of cancer that forms in soft tissue, specifically skeletal muscle tissue. According to Mayo Clinic, RMS can occur at any age, but it most often affects children.
“Abbi has been telling me for a few years now that she wants to be a cop,” said Custer, 31. “And a couple months ago, I started asking her what she wanted for her birthday and if there was anything big she wanted to do, and she said that the only thing she truly wanted was to get a tour of a police station.”
The revelation sounded simple enough to Custer. “I thought that was the most random thing a child could ask for her birthday…but, okay,” Custer explained.
Over the summer, Custer put feelers out on the school’s Facebook page and inquired whether anyone could help or if they knew any police officers that could better direct her.
What happened next really set the wheels in motion: Taft-Galloway’s secretary, Kitty Monit, reached out to Wayne Mayor John Rhaesa, who then brought the request to the Wayne Police Department.
Meanwhile, Abbi was none the wiser. Although it was her birthday, it was still a school day, so Abbi assumed it would begin like all others.
That was, until Sergeant Talmadge’s squad car arrived in Abbi’s driveway on that crisp, autumn morning. And with sirens blaring and the lightbar flashing, Abbi was delivered to her school’s main entrance as staff, students, and family members applauded her arrival.
“I was shocked,” exclaimed Abbi, looking back on her completely unanticipated school drop-off. After looking around inside the car, it hit her. “Like…I’m in a cop car! I can’t explain it. It was really exciting.” 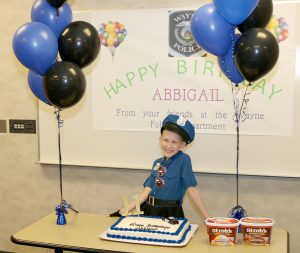 The Wayne Police Department had a little party for Abbi at the Wayne police station.

It was a great day for Abbi all around, but it arrived on the heels of some not-so-great ones.
In late December 2021, a few days after Christmas, to be exact, Abbi went in for what was supposed to be a relatively routine surgery—she had her tonsils and adenoids removed, and they were biopsied afterward.
“The doctors recommended removal because her adenoids were causing sleep apnea, but we didn’t know it was cancer,” said Custer. “We thought she was going in to have this surgery during Christmas break, she would miss two or three days of school, and then she’d be back. But instead of going back to school, we started going to oncology.”
Nine months of chemotherapy followed. There was also a lengthy round of radiation therapy. “In May she did radiation everyday—Monday through Friday—every day for four weeks,” recalled Custer. “She basically missed the whole last month of school.”
Her birthday, however, was a good day for Abbi, who counts playing with slime, eating Flamin’ Hot Cheetos, and binge-watching the television series Gilmore Girls as a few of her favorite things.
When asked where and how her daughter finds the strength to persevere, Custer said she didn’t have the answer.
“I would love to know,” she said. “She never really let any of this [get her down]. She’d be miserable, but she’s worried about everyone else. She even shaved her own head because she didn’t want to lose her hair. She has been one step ahead of me emotionally this entire time.”
Custer, however, is quick to divulge the poignant lesson she has learned amid all of this. “I decided that—from day one—we’re just going to do this day by day. We’re going to wake up on Monday and deal with Monday. We’re going to wake up on Tuesday, and we’re going to deal with Tuesday. And if Wednesday we don’t feel good, we don’t go to school. I had to give up all reality of me having control over any of this.”
In short, the Custers have resolved to take everything as it comes, and that includes reveling in the bright spots and shiny moments like the one that happened on the morning of Abbi’s birthday. (Additionally, the Wayne Police Department hosted a birthday celebration later that evening, which was also a surprise to Abbi.)
“Amazing,” said Custer about her daughter’s squad car experience. “She’s never going to forget it.”