Staying Power – What are the keys to lasting love and a strong marriage? According to one Wayne couple, it’s commitment, honesty, and putting the other person first

By Courtney Conover – Marriage, for the most part, exists as an idyllic social construct in our society.
Sure, stereotypes like the husband who ignores his wife’s honey-do list, the wife who shops too much, and the mother-in-law who can’t stop meddling make for convenient jokes.
But, by and large, marriage—often accompanied by the vision of a beautiful wedding and blissful happily ever after—has a way of finding itself on the master checklist for adulthood.
Not pictured, though, are the proverbial bumps in the road that are part and parcel with saying “I do”: the minutiae of everyday life, the navigation of hardships, and growing pains.
Marriage can be lovely, yes. But it also takes work.
And Susan and Jesse Powers, who have been married for 45 years, wouldn’t have it any other way.
When asked to recall the moment he knew Susan was the one, Jesse, who turns 65 in June, gives a reply that would make any hopeless romantic weak in the knees.
“I think I always knew,” he says of Susan, 64.
The details of their pairing are infused with the simplicity of young love, the kind of hopeful imagery one could see playing out in one of John Mellencamp’s music videos.
They met at the age of 10, but it wasn’t because they grew up a stone’s throw away from each other or because they followed the same route to school. That wasn’t the case at all: Susan and her family lived in Dearborn, while Jesse and his family made their home in Milford. The two met in Milford at Camp Dearborn while their families camped one summer.
“We were kids, so we didn’t drive,” says Jesse. “When school started, I wouldn’t see her again until next summer. You know that song See you in September [by The Happenings; 1966]? It was kind of like that—only I’ll see you in June.”
The fact that the initial stage of their relationship was punctuated throughout the years by months and months of physical distance makes their tale so unconventional.
By the time Susan was a senior at Dearborn’s Fordson High School—and Jesse was a senior at Huron High School in Ann Arbor—they were ready for more.
“It was just a phone call,” says Susan. “We started talking, and very soon after, he joined the military—the army—and asked me to marry him. I was still in high school…and I said yes! The wedding was quick and sudden.”
But not everyone was over the moon about it.
“It’s interesting,” Susan recalls, chuckling. “Jesse’s father was very negative, and on the way to the church, he made a comment to one of Jesse’s younger sisters [Jennifer] that this was the biggest mistake of Jesse’s life, and it won’t last six months.”
Susan, however, was none the wiser. When she saw Jennifer, whose sensitivity had long earned her the nickname “Tenderheart,” crying at the church, Susan assumed she knew why. 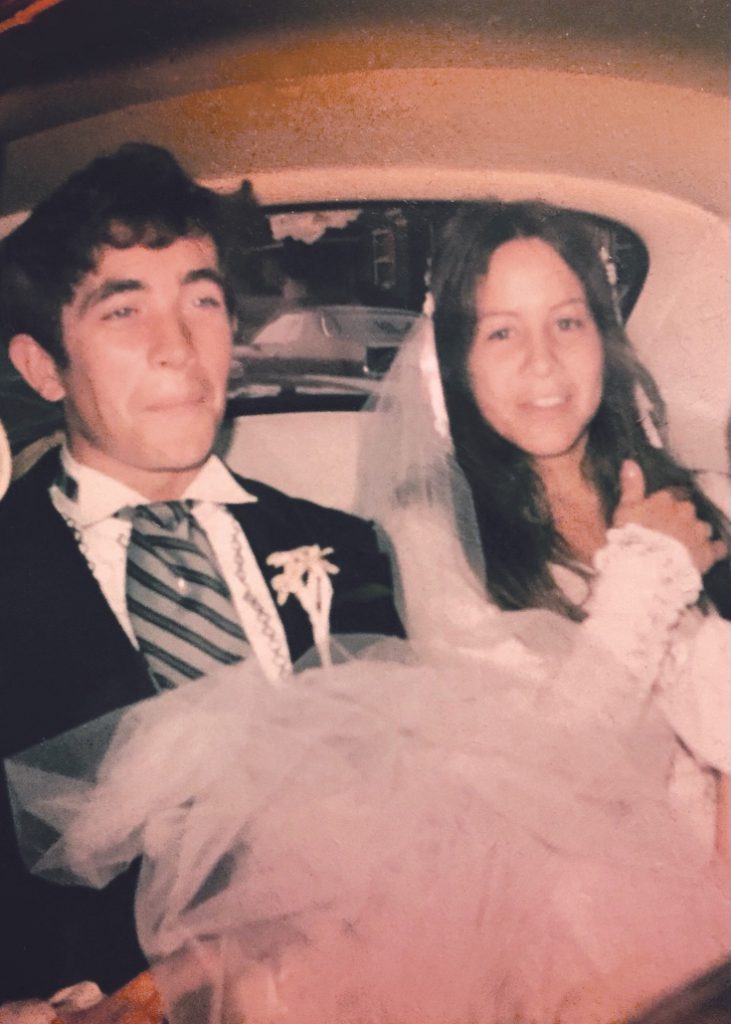 Remembers Susan, “I thought, ‘Oh, how sweet, she’s crying because she’s so happy.’ No. She was crying because her dad told her we wouldn’t last. She thought we were going to break up!”
Jesse learned of all this mere moments before walking down the aisle but didn’t pay much mind. “I didn’t have time to think about it,” he says.
By today’s standards, Susan and Jesse’s nuptials wouldn’t be profiled on one of those blingy wedding reality series on cable: It happened on a Tuesday, the reception was in Susan’s parent’s basement, and her sister had made her dress. Any photographic evidence that the event even took place was captured with a Polaroid camera.
But what the couple lacked in pomp and pizazz, they more than made up for with character and genuine love.
Susan and Jesse spent their first night as a married couple at what was then the Hyatt Recency Hotel in Dearborn. The next morning, they promptly packed up their belongings and took off for Columbia, South Carolina, where the two would live while Jesse completed his last year of military service.
“Everything we owned fit in our car—a 1970 Ford Galaxy 500,” recalls Jesse.
The two remained in South Carolina for a year before returning to Michigan (South Lyon, to be exact), and then eventually they settled in Westland to raise their family.
The roots of their marriage were strong.
Jesse credits being all alone—bereft of any friends or family—while in South Carolina with making them closer.
By the time Susan was 24 and Jesse was 25, they were the parents of four children, three daughters, and one son.
Susan remembers the time all too well, when they were in the thick of things, when she and Jesse were balancing marriage amid work life and child rearing. At the time, Jesse worked afternoons at General Motors, while Susan worked at a local dentist’s office during the day, which afforded her the flexibility to attend parent teacher conferences and the kids’ performances at school.
“Looking back, though, I remember living paycheck to paycheck,” she says. “For a long time, we kind of worked opposite shifts.”
“She told me one time, she felt like a single parent because I was at work all the time,” Jesse, who has since retired, admits. “But I had no choice; I never turned down overtime.”
“At the time, it was all we knew,” says Susan of their grind. “In hindsight, it was a good thing. But I remember feeling envious of friends. I had one girlfriend who went to The Kentucky Derby every year, and we knew people who were out doing things…but our lives revolved around our kids. We were a family, and there was never any question of ‘No, this isn’t working’ or ‘Oh, we’re not getting along.’ I’ve always been conscious of setting an example for our kids. That’s always been important to me. My [adult] kids will say to me now, ‘You know, you guys never fought.’ Well, Jesse and I did disagree. There were many times we didn’t like each other very much, but we never did it in front of them [the children],” says Susan.
Above all else, The Powers’ approach to trudging through the rough moments involved simply being there: theirs was the house all the kids hung out at, and their children’s childhood friends still call them “Mom” and “Dad.”
But that’s not to say it was always smooth sailing: Susan wasn’t one to blindly stick up for her children, she was a firm believer in natural consequences, and between she and Jesse, she was far more likely to be the one to dole out punishment—or as Susan called it, “house arrest.”
“However, we were also never the type to criticize, condemn, or complain about anyone in authority, in particular at school, their friends’ parents, etc. We wanted to give everyone the benefit of the doubt and set that example for our kids,” says Susan, who currently works for Starfish Family Services.
Another ingredient in their secret sauce was the emphasis on giving back. Susan made it a priority to bring the kids along when she volunteered; Jesse took them with him when he gave blood.
Turns out, that’s the brand of tough love that often tends to age well—and create stellar parent-adult child relationships.
Today, Susan and Jesse’s adult children range in age from 39 to 46 years old, and the couple enjoy wonderful relationships with all four. Rounding out the circle are 8 grandchildren who range in age from 6 months to 26 years old.
Susan and Jesse have been residents of Wayne for 20 years and live next door to their only son, who has lived in his home for over 10 years.
Fun fact: Both homes are 100 years old. To say that The Powers are pleased with how everything has turned out would be an understatement. Next up on the agenda, the couple would like to plan a few trips together, an act that one might consider an uncharacteristic one, considering that Susan and Jesse are self-professed homebodies.
They’ve never been ones to paint the town red.
“We never went out…still don’t,” says Susan.
“We are really fortunate to be able to spend time with our grandkids. They are the jewels in our crown,” continues Susan.
Case in point: The front room of Susan and Jesse’s farmhouse is a kid’s paradise, replete with a variety of blocks, a play kitchen, and a pack-n-play. Sometimes the more things change, the more they stay the same, which not only serves as a source of comfort—but is also confirmation that where you are is exactly where you want to be.