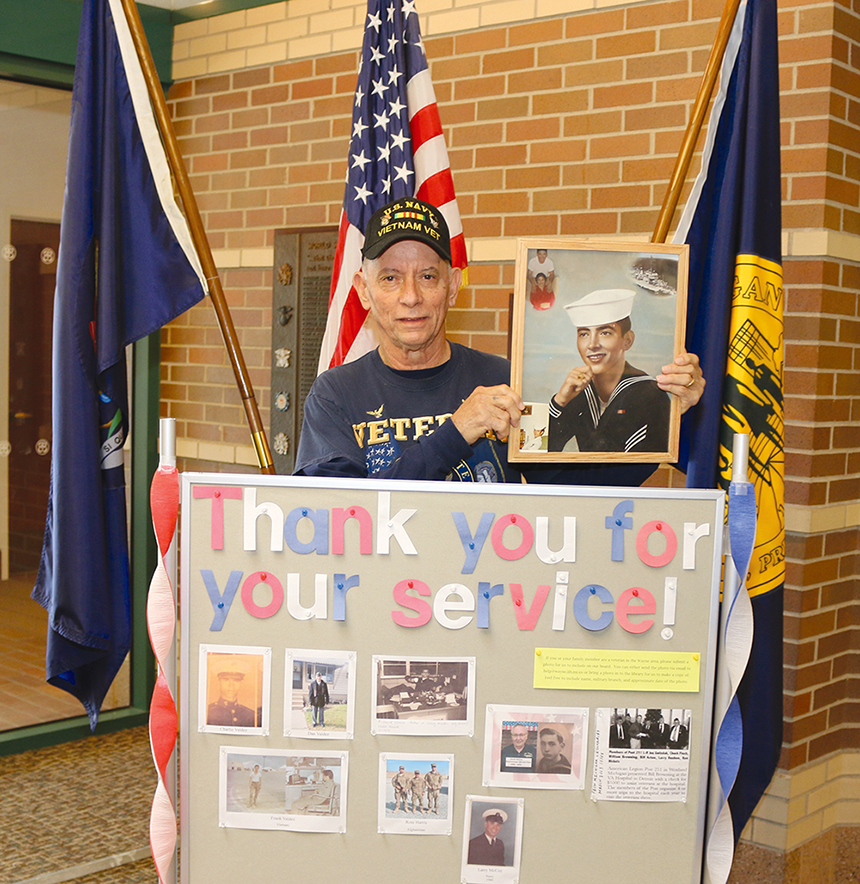 By Sarah Shurge – As we welcome the month of November, many people’s first thought goes to Thanksgiving. A holiday focused on family, friends, football, and food. But another holiday happens earlier in the month that some would consider much more important. Veterans Day.
Veterans Day is a day set aside to celebrate and honor all military veterans who have served. That includes those who have died in the service and the ones still with us.
So how do you celebrate? What do you do to honor them?
Wayne veteran Daniel Valdez and the Wayne Public Library have come up with a way to honor our veterans for November.
Valdez attended one of the city council meetings and decided to speak up about an idea he had. He went to the Plymouth Library and saw they had a big board with pictures in honor of veterans, so he made the suggestion to create a display for the veterans here in Wayne.
Next thing Valdez knew, he was talking to the council on the phone about his idea and making plans with the Wayne Library for the display to happen.
“This is an opportunity to thank the veterans for the service they have provided and shine visibility on people in our local area that we may not realize have served this country,” said Jody Wolak, Wayne Public Library director.
It’s very easy to get involved. Any veterans in the area, family of veterans in the area, or anyone with a connection to Wayne that is a veteran, can submit a picture for the display.
You can email a picture to help@wayne.lib.mi.us with your name and branch of service. Or, you can bring a photo into the library and they will make a copy.
The display will be put up in the library lobby the first week of November, and pictures will continue to be added throughout the month as they come in.
“If people are receptive, we could bring this back every year,” said Wolak.
Valdez already sent his picture in and his brother’s picture in as well.
Valdez was born in Tampa, Florida. He was a wild kid growing up and due to uncontrollable circumstances, he didn’t get to graduate high school. Out of anger, he joined the service without his parents knowing. Due to his love for ships, he joined the Navy. Valdez served in the United States Navy from 1968-1974. During his service, Valdez was stationed at Newport, Rhode Island and stayed on the USS Charles P. Cecil 835 for two years.
His brother, Frank Valdez Jr., served in the United States Air Force during the same years and fought in Vietnam. His other brother, Charles Valdez, was a United States Marine Corps Reserve from 1963-1971.
Charles passed away in 2017 from cancer and since then, Valdez has been fighting for Reserves to get medical benefits because his brother Charles didn’t receive any after his service. Charles never went active duty and therefore, didn’t qualify for benefits.
Valdez has been writing letters, calling politicians, and trying to contact people about this matter because he full-heartedly believes it’s time for a change for Reserves.
“Anyone that completes their service, they deserve every bit of honor,” said Valdez.
Once Valdez’s service ended, he went back to school and got his diploma. He completed 11th and 12th grade in six months of night school. He then moved to Wayne, Michigan to better his life. He’s been in Wayne ever since and retired from Ford after 32 years.
He’s been married to his wife for 12 years and has one daughter and stepson. Every Veterans Day, Valdez goes to get breakfast or dinner with wife at restaurants that honor veterans.
“Those that died and those that are still living, deserve to be honored,” said Valdez.
The Wayne Public Library is now doing its part to honor those that have served by setting up the veterans’ display.
“Thank you [veterans] for your service and thank you, Mr. Valdez for the suggestion. We are always open to suggestions from the community about events and displays the library can do,” said Wolak. “Please continue to let us know. That’s how we continue to offer things that benefit the community.”
The library is open Tuesday through Thursday from 10:00 a.m. to 8:00 p.m. and Friday and Saturday from 12:00 p.m. to 5:00 p.m. It’s closed on Sunday and Monday.

How to reduce your lead exposure at home