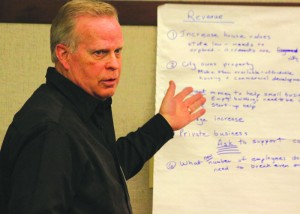 It was a meeting of the minds. The city’s financial vision sessions paired city officials, residents, business owners and other community members of Wayne together to come up with goals and ideas for the city’s financial future.
Jim Ghedotte, the City’s Finance Director, presented both the current budget and a 5-year projection to the group.
“Over 50 people participated in our visioning session this weekend including the city council, our employees, some of the union representatives, our department directors, business owners and most importantly, our residents. I am so thankful for the input and look forward to our next session,” said Acting City Manager, Ramzi El-Gharib.
Wayne has some challenging financial times with a $1.6 million budget deficit to address this year and a potential $3.5 million shortfall for fiscal year 2014-15.  Within the next five years the city could face an $18 million-plus budget deficit if nothing changes.
One of the reasons for the shortfall is the decrease in property taxes. It will decrease by 5% in 2014-15. Ghedotte said they think this will be the bottom and “we will start to see slight increases after.”
Ghedotte estimates property taxes will increase by 1.5% each year after and it will take about 28 years for housing values to get to where they were in 2009.
The tax rate has increased 14.37% since FY 2007-2008 but the taxable value has decreased 43.05% since then.
City officials thought the passing of Public Act 345 would help ease the budget woes too. If voters had passed it in November, it would have generated $2 million a year to fund the police and firefighter pensions.
Also, the city, along with all others across the state, has seen a decrease in state shared revenue- money it receives from the state.
The city has already implemented cost saving measures like a hiring freeze and expenditures being approved by the acting city managers. But these measures alone will not fix the problem.
“We have to make the tough decisions, and fix our problems,” said Councilmember John Rhaesa. “If we don’t, the State of Michigan will come in and fix them for us.”
Ghedotte said the growing deficit would eventually set off triggers at the state level. If the city goes into deficit they will have to present a deficit elimination plan to the state.
But there is another option the city council could decide to explore. The state has implemented an Office of Fiscal Responsibility.
“You can request them to come look at your books and that is for entities precisely where we are, not in deficit but based (on projections) we can see where we will be,” Ghedotte said.
The goal of the financial-visioning sessions is to come up with ideas for sustainability and long-term health for Wayne. The first session included a financial overview of the City and breakout sessions where participants had an opportunity to partake in a group brainstorming exercise on Wayne’s desired future. The second session will include a review of the first session, ending with a Five-Year Strategic Planning exercise followed by participant’s comments.
“We have had some excellent feedback so far. I hope this momentum continues at our next session,” said Mayor Pro Tem Jim Hawley.
The 2014-15 budget has to be approved by city council by the second council meeting in May.
“It is clear we have to do business differently,” Ghedotte said. “City council is facing a deficit for next year and they are beginning deliberations on Feb. 11 on how to (solve it).”