Water meters being replaced throughout community 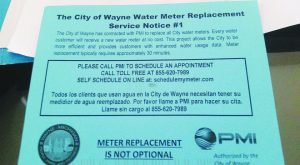 By Carolyn Marnon – Water meter replacements have started in Wayne.  Etna Supply, a Michigan-based company, is finishing the replacement of water meters at commercial businesses in Wayne.  Once that is complete, replacement of residential water meters will begin.
Residents will receive a letter from the City about the replacement project.  PMI, a master licensed plumber, will send three letters over a period of time about one week apart, to residents asking them to schedule an appointment to have the meter replaced.
When the PMI contractor comes to the house, he will have a vehicle with PMI on the side and an ID badge that was made by the Wayne Police Department.  Background checks have already been done by both Etna and the police department on these contractors coming into homes in Wayne.
Appointments will be scheduled during regular business hours.  However, other accommodations can be made if needed.
The new meters will be placed in the same spot as the current meter.  There is an inside meter and an outside mount that should take 15-20 minutes to install.  You are asked to move items away from the wall where your water meter is to make the replacement process easier. If the contractor cannot install the new meter because of substandard plumbing in the residence, the City will contact the owner to bring the plumbing up to standards before the meter will be replaced.
The polycarbonate meters have two warranties.  The first is a 20-year warranty on accuracy; the second is a 20-year warranty on the battery.  The life span of the meters is expected to be 25 years. The old water meters were supposed to last ten years and then accuracy starts to decline.
In 2014, the Federal government mandated that water meters be lead-free; the meters being installed are zero-lead meters.
The new meters will send a signal every four hours to servers that the City can access.  Wayne does not do estimates on water bills; meters are actually read.  To aid in quality control during this transition process, the company will take a picture of the existing meter read on the old meter and then take a picture of the meter read on the new meter after it has been mounted.
Residents are advised to run water for 15-30 minutes after replacement to let everything that might have been disturbed in the plumbing pipes clear out.
Residents will be able to manually read the water meter.  It is advisable to read the meter on the monthly billing date.  If the water bill is dated the 25th of the month, read the meter on the 25th and then compare it to the bill when it arrives to make sure the readings are comparable. If there is a spike in water charges, call the water department.  They can look at the hourly system to try to determine where the problem might be.  If someone tries to flip a meter or remove it, an alert will go off at the water department.
After replacement, if a resident has a discrepancy in the water bill, the resident is advised to visit City Hall and speak with the water clerk.

HYPE celebrates successes of their first year in Wayne