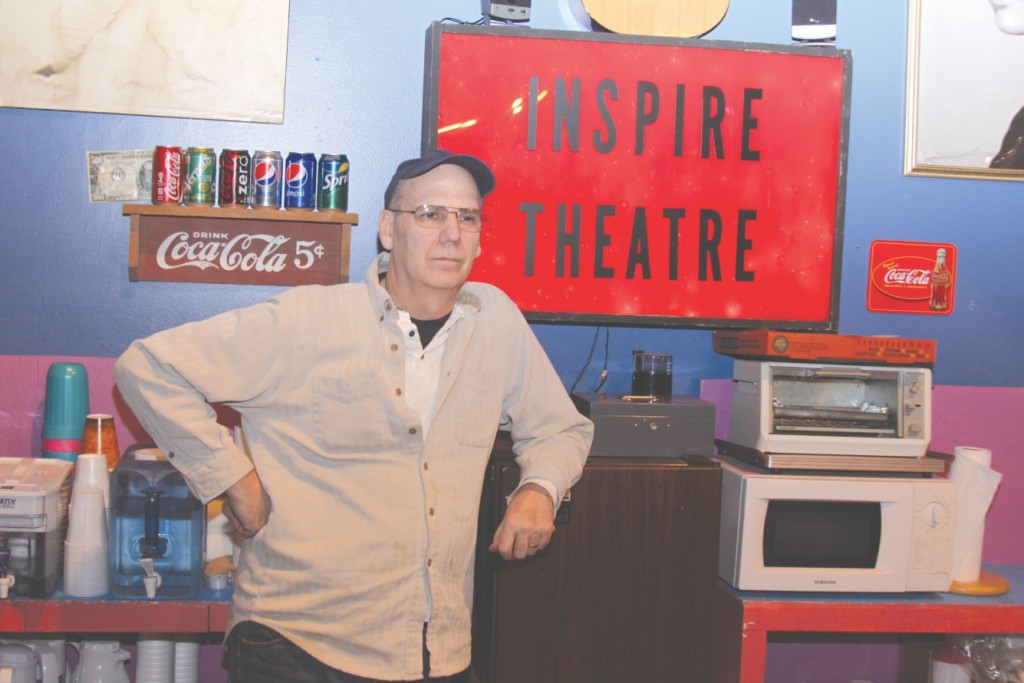 By Alex Lundberg – For the last 10 years, a group of dedicated actors and musicians have been bringing entertainment to Wayne residents from a humble stage in the middle of an industrial park in Westland. After dozens of performances and acting and stagecraft classes, they’ve also formed a kind of extended family.
Inspire Theatre, which celebrated its anniversary on Valentine’s Day, has attracted players and production assistance from residents all over Wayne and Oakland Counties.
Len Fisher of Wayne is the owner and artistic director of the theater, and has been performing in local plays of all kinds since first appearing on stage in high school.
A job had just ended for him, and he was at loose ends when he founded the company on a fluke.
“I called a few people I worked with in theater before and I suggested we put on a show,” he said. “We weren’t aware of what we wanted to do, we just knew we wanted to do it.”
Their first production, “That’s Amore,” was a musical variety tribute to love and marriage. In the years since then, a shifting group of actors, singers, set dressers, lighting and sound technicians, etc. has ranged between a core group of 25 dedicated volunteers and an extended support group of nearly 60 people. He said they’re always looking for more.
“Anybody who wants to can audition,” Fisher said. “For the show we’re working on now, we need five men and two women.”
The next show is “The Foreigner” by Larry Shue, about two men from the United Kingdom coming to rural Georgia for work. One is a demolitions expert, the other is pretending to be deaf in order to hide the fact he doesn’t speak good English. Conversations happen around the latter, leading to a lot of people saying more than they should.
It’s part of a trend at Inspire Theatre.
“We have a tendency to do a lot of comedies, mysteries and variety shows,” Fisher said. “Musicals have happy endings.”
Deanna Lee of Redford teaches elementary physical education in Livonia and played Gracie Allen in the 10-year anniversary variety show production. She saw the Inspire Theatre’s presentation of “A Christmas Carol” and has been involved ever since.
“I’m acting, selling concessions, ushering, whatever they need. Being on stage is my favorite part.”
Part of the enjoyment on stage, she said, comes from the degree of ownership she can take in the roles she plays. She said Fisher encourages the actors to develop back stories of their own to better know their characters and understand where they’re coming from when they speak.
“He wants us to research things and come up with our own twists on the projects,” Lee said. “He offers us what he sees for the characters but wants us to really personalize them.”
Wendy Hardy of Livonia is a member of Inspire Theatre, but doesn’t act or sing. She builds sets and makes costumes for productions. Because funds are very tight, she’s become an expert at shopping smart.
“We use and re-use what we have,” she said. “We get a lot of costumes from the Salvation Army and resale shops. We have some donors, but we mostly keep it simple. The same furniture shows up again and again.”
She got started in the theater when a friend at church saw a flyer advertising for kids to audition for a production of “The Wizard of Oz.” Her kids got parts in the show and rather than take two trips ferrying them back and forth to the rehearsal space in Dearborn, she decided to stay and help out.
“Their father sings now,” Hardy said. “In the last nine years, there has been at least one member of my family, other than me, in a show. I’ve been a house manager, an assistant director … whatever he asks me to be. I can’t imagine not being a part of the Inspire Theatre family.”
Fisher also refers to the troupe as a family. In August, when their show was just wrapping up, Fisher was diagnosed with prostate cancer. It was an aggressive case, but it was caught relatively early and he is in observation every six months. He said the timing was opportune; he had no production to shepherd along and was able to devote all of his time to caring for his health. He had a lot of help.
“The theater school parents were phenomenal,” Fisher said. “Their support was tremendous. Them, along with my church … I was really blown away.”
Inspire Theatre’s performance space is located in a Westland industrial park they’re calling the “warehouse district.” They tried to locate in downtown Wayne but lacked the resources to purchase a space on the main drag. Still, Fisher did participate in the successful effort to get the city recognized by the Main Street organization—a status that made resources like specialized signage and renovation loans available from the state. 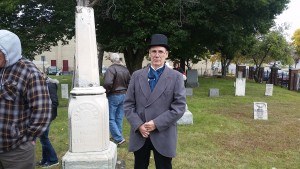 Len Fisher playing the role Ezra Derby, the founder of the City of Wayne.

He did this by channeling Ezra Derby, the founder of the city of Wayne, before the state legislature in Lansing. The entrepreneur built a sawmill, a store and helped found the first school on the Detroit to Chicago road (now Michigan Ave.) back in the mid-1800s.
Taking the same route he advises to his actors, he looked into who Derby was to craft the character.
“I talked to the historical society and read up on the facts,” Fisher said. “He was married five times and is buried next to three of them in the cemetery.”
Since 2010, Inspire Theatre has run a theater school for kids 7-17 years old that puts on its own plays and shows. There are two classes of students at any given time, and many of them have returned year after year to take more classes and perform in productions.