Where everyone can know your name 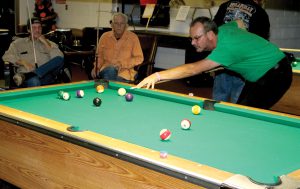 By Carolyn Marnon – Would you like a place where you could make new friends and gather with others socially? Wayne has such a place where you will be welcomed with open arms! Moose Lodge #835, 38050 Michigan Avenue, is looking for new members and invites you to come check them out.
Moose International is a fraternal organization of men and women who are dedicated to caring for young and old, bringing communities together and celebrating life. “A burden heavy to one is borne lightly by many” is at the core of what makes this organization unique.
The Moose can trace its roots to 1888 when Dr. Henry Wilson established the first Lodge in Louisville, KY. In those early years, the Moose served a modest goal of offering men an opportunity to gather socially, care for one another’s needs and celebrate life together. Since then, the organization has expanded to include service to its communities and the care of children and teens and of senior citizen members.
Mooseheart Child City and School is located in Mooseheart, IL, 40 miles outside of Chicago. It is a 1,000-acre campus for children whose families are unable, for a wide variety of reasons, to care for them. Some have lost one or both parents; others were living in environments that were not conducive to healthy growth and development. The children at Mooseheart are cared for in residences that are designed like spacious single-family homes. 6-12 children live in each home. Most homes are named after states. The children who live in those homes usually come from those states. Mooseheart wants to help children retain some tie to where they are from. There is a Michigan residence.
Moosehaven is a 70-acre retirement community near Jacksonville, FL where Moose members can retire to.
Barry Rayman is the Governor of the Wayne Lodge. He says the goal of Moose International is to raise funds for Mooseheart and Moosehaven. Locally, Lodge #835 raises money to help community members. Recently, the Women of the Moose Lodge #835 raised $200 for the TEARS Foundation. They also recently ran a basket raffle inside the Lodge. 17 baskets were put together by members, businesses and friends of the funds recipient’s mother. The funds helped her 27-year old son who has stage 4 germ-cell cancer.
The Moose is a family center. Barry and the Senior Regent for Women, Sue Honke, encourage families to come see what they have available. The Moose women do a lot of kid functions, especially at Christmas, Halloween and Easter. There are a variety of leagues and activities members can participate in: dart league, pool league, corn hole, horseshoes, men’s golf. Sue says they would love to start a Junior Moose for teens. Moose International offers a scholarship to children of members.
There are no special requirements to become a Moose member. There is an application fee and an initial fee. After that, there are only yearly dues to pay. Your Moose card enables you to enjoy time at any Moose lodge anywhere.
Barry says he grew up in the Lodge. His parents were both members. One Saturday, his dad took him to a bowling alley to join the youth Moose bowling league. He bowled from age 7-18. When he turned 19, he got married and lost touch with the Moose. Ten years later, an encounter with a friend resulted in an invite back to the Lodge. He’s been a continuous member since 1993. Overall, he has had over 40 years of experience with the Lodge. He is currently in his second term as Lodge Governor; he has also been Junior Governor and is serving his fourth year on the Moose Board.
Sue Honke and her husband, Rich, were invited to karaoke night at the Moose lodge several years ago. They liked what they experienced and joined. She is in her first term sitting on the Moose Board. She tries to get involved, do different things and help wherever she can.
The Wayne Moose has about 375 men and 212 women members. Becoming a member can help you get out of the house, meet new people, and have camaraderie with others. Barry says it’s “a night out of the house instead of sitting in front of the TV.” Every Friday night is a game called “Show Me the Money.” On Sundays, football games are playing and there are drink specials. Drop-in Euchre happens on Tuesday nights at 6:30 p.m.
If you want to check out the Moose, it is easy to do! You can walk in anytime they are open, look around and ask questions. You don’t have to know another member to do so. You can come check out the Friday night “Show Me the Money.” Everyone, including the bartender, at the Moose is a volunteer. They give their time to something they truly believe in. Membership can mean different things to different people. You are the one determining what you want to get out of the organization, and what you want to give back.
For more information, you can call (734) 721-6844. Tell them you learned about them in the Wayne Dispatch. Ask questions. Come by (38050 Michigan Avenue). See for yourself what a great group of people support Moose Lodge #835.