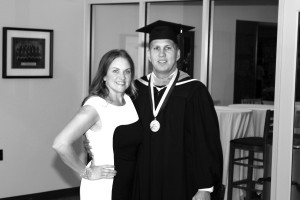 Jeff Styers and his wife Lisa

Jeff Styers is a 1984 graduate of Wayne Memorial High School and was chosen as this year’s Distinguished Alumni. After graduation he enlisted in the United States Marine Corps and was a celebrated amateur boxer winning 98 of his 102 amateur fights. His amateur highlights include a stint on the All-Marine Boxing Team and winning the Michigan Golden Gloves in 1986.
Jeff made his professional debut in early 1988 and went on to have a successful professional boxing career, as he was unbeaten in 11 professional fights.
At the height of his career, Jeff experienced an epiphany that, after much soul searching, left Jeff walking away from the only endeavor he had ever known.
Without a college degree or any real-world experience, he set out into the business world with the same lofty aspirations that he had as a professional boxer.
Jeff ended up in the professional staffing industry where he applied the same traits he knew from inside the ring into a business environment. Those traits served him well as he experienced early success culminating with a rise through the management ranks and eventually landing him on the executive level of a two billion dollar company.
Convinced he could build a better company with more meaning himself, Jeff left the corporate world and in 2002, started his own company.  Today, that company – Arrow Strategies, is a $54 million dollar firm with over 400 employees and offices across the country and Mexico.
Arrow Strategies has been recognized as the 5th Fastest Growing Staffing Firm in the country for the last two years by Staffing Industry magazine. Arrow Strategies has received these additional awards and recognitions:
• Recognized by Inc. Magazine as one of the nation’s fastest growing companies for seven consecutive years
• 101 Best and Brightest Companies to Work for “Best of the Best” award – 3 time winner
• Detroit Free Press Top Workplace
• Crain’s “Coolest Places to Work”
Jeff and his wife Lisa currently reside in Northville, Michigan. They have one daughter, Leah.