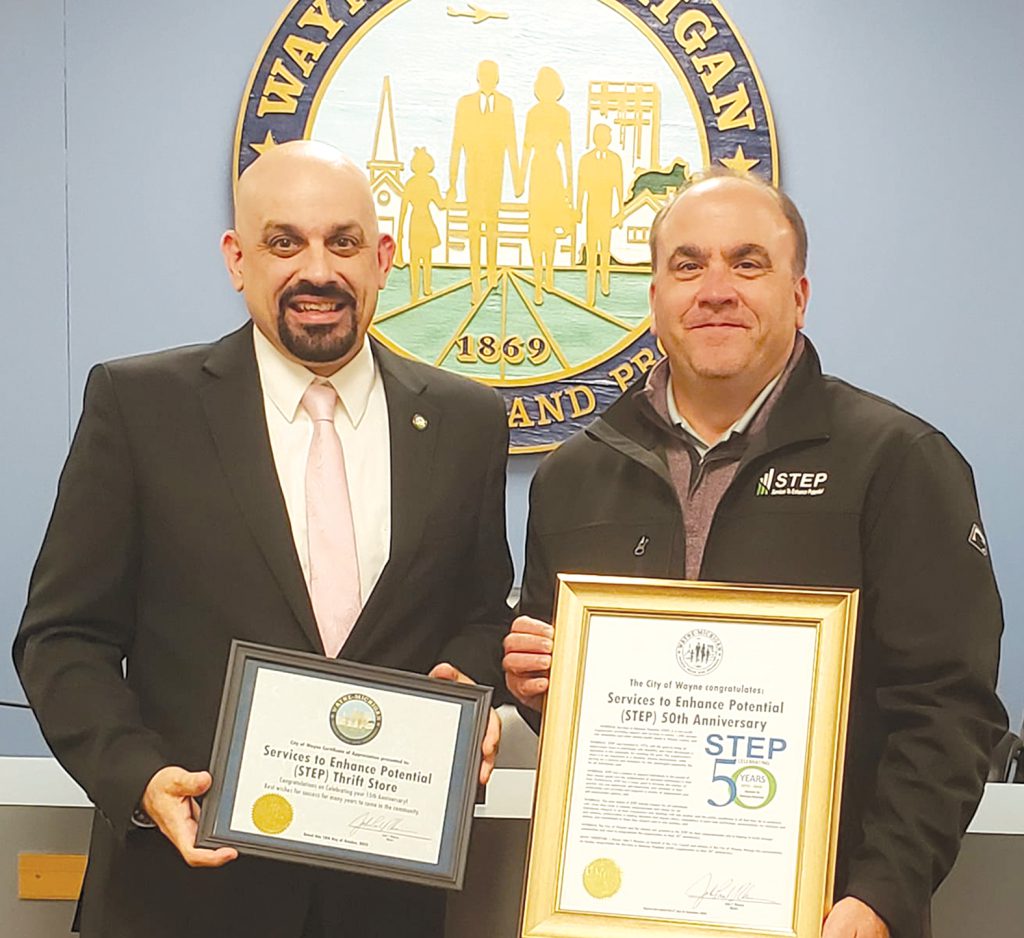 At last month’s Wayne City Council Meeting, the Chief Executive Officer and President, Brent Mikulski, of Services to Enhance Potential (STEP), was presented with a resolution congratulating the organization on their 50th anniversary by Mayor John Rhaesa.

By Courtney Conover – Here’s an undeniable fact of life:
No matter what you see on the surface, there is often more to the story.
Whether it’s the dutiful employee who, despite living out of her car, arrives to work day in and day out with a jovial disposition, or the understated gentleman who frequents the local diner every morning to take advantage of the senior special despite being a millionaire, the crux of the lesson remains the same.
You simply can’t judge a book by its cover.
Organizations are no different, particularly those that serve individuals with significant disabilities or cognitive issues. As the CEO of STEP (Services to Enhance Potential), Brent Mikulski is acutely aware of this, and bears witness to it daily.
“We help individuals—wherever they live—to be a part of their community, to be accepted, and to be as independent as they possibly can,” says Mikulski.
Founded back in 1972, STEP’s primary focus was—and remains—securing compatible employment options for the nearly 1,300 persons with disabilities and other mental health needs in Wayne County. The non-profit organization aims to increase the number of persons who are employed, self-employed, and volunteer in communities.
That’s no small undertaking.
But STEP has continued to face the challenge head-on and rise to the occasion. This is largely due to the four services the organization provides: Supported employment services, transition services, engagement in the community, and programming.
And nowhere are these pillars more accurately personified than at STEP’s thrift store on Michigan Avenue in downtown Wayne.
What many shoppers who frequent this store may not know is that the benefit of frequenting this shop is threefold: One finds incredible deals on unique items, supports a local business, and infuses store interns with the invaluable worth of independence and self-confidence.
STEP operates three thrift stores, in fact, which also house donation centers. The Wayne location opened in June of 2007, Southgate in 2011, and Dearborn in 2016. These stores present an ideal opportunity to train and employ individuals with developmental and mental disabilities. Here, these individuals can hone their retail skills with the ultimate objective of finding employers who are sympathetic to their needs and are also willing to help further develop their skills.
A transitional program that aids with this is Project SEARCH, which assists high schoolers to obtain employment following graduation. Instead of spending their senior year in a traditional classroom setting, Project SEARCH partners with a high school as well as a local business—typically, a large employer—so that the participating students spend that year in a classroom at the host site. While the first half of the year is spent in the host site’s classroom, the student spends the second half interning at the host site.
“They’re working at a front desk, they’re working in finance or accounting, or security,” says Mikulski. “They do about two or three rotations, depending on the work site.”
And when these students graduate in June, they have more than just experience—they have a resume to match.
“I always say this to people: When you meet someone for the very first time, your first question is What’s your name? And pretty much your second, third, or fourth question down the line is What do you do for a living? And if you have individuals who can’t answer that question—or who aren’t proud to answer that question—it takes a whole different turn for that conversation,” says Mikulski. “But when that individual can answer that question and see the pride in their faces when they respond, it has been an absolute joy to be a part of.”
This is where STEP’s many corporate partners come into play.
STEP assists numerous employers in finding qualified, dependable employees for over thirty years. In short, STEP has been routinely successful in matching those with disabilities with compatible workplaces to create productive relationships. STEP’s staffing options include providing an individual hire, industrial subcontracting, and securing a self-employed individual to provide goods or services to a business. Through the years, STEP’s corporate partners have included such esteemed companies as Kroger, Detroit Zoo, McDonald’s, Little Caesars Arena, Meijer, Target, The Henry Ford, Applebee’s, American House, and many more.
Now, let’s shift gears and focus on art. 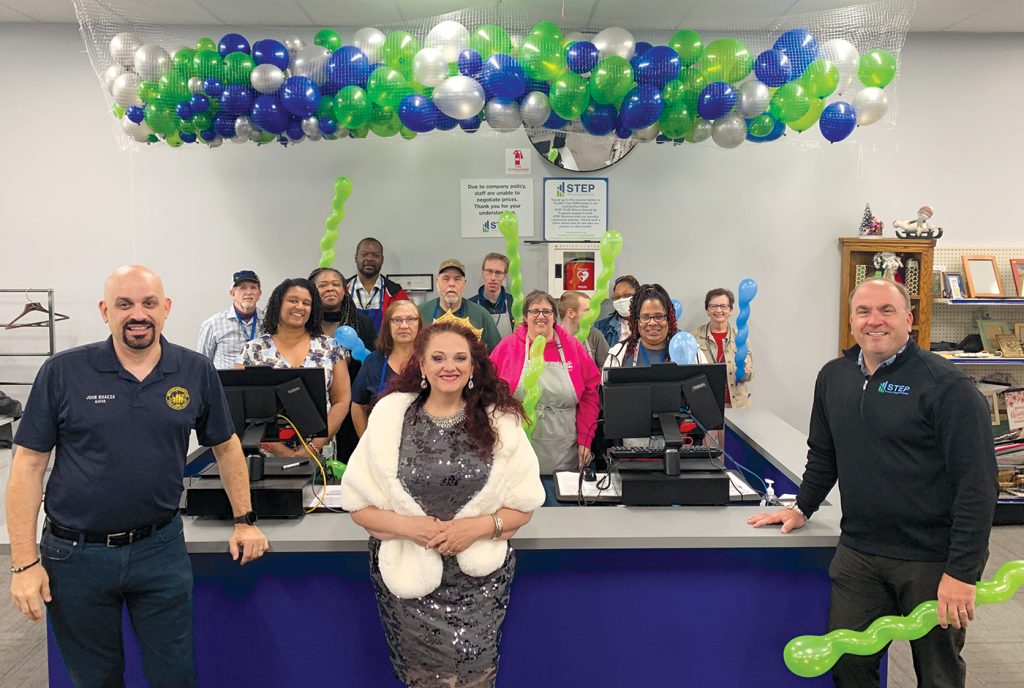 STEP’s Progressive Art Studio Collective is the first of its kind in Wayne County. It provides artists with disabilities a safe space to find their voice and bring their visions to life by way of providing a bevy of materials, workshops, and gallery exhibitions. There are three art studio locations, the closest to Wayne is the one on Venoy, just south of Cherry Hill in Westland, in what was formerly known as Tinkham school. And it was just what the doctor ordered.
“It has 30-plus classrooms, a large gym, several meeting rooms—the exact setting that we felt those that we serve—and our employees—were going to do some pretty cool things in,” says Mikulski. “And the community has just loved us. We have an annual drive-in movie car show that folks can attend. It has just been wonderful and really reinforces why getting into that center was a great idea.”
Approximately 20 artists currently participate at the Tinkham location every day. At its core, it’s an art education model that fosters communal work to achieve independence. And artists can make money by selling their work. Mikulski says that roughly 50 pieces of artwork have sold for somewhere in the neighborhood of $300—sometimes more. Each artist retains sixty percent of the sale, while forty percent goes back to the studio.
STEP embodies what it means to give back to the community, while paying it forward at the same time. And the organization’s values are a huge part of the secret sauce. Among them are respect for all individuals, integrity in every transaction, competency in each task, and striving for excellence.
And this year STEP hits a high mark—its 50th anniversary of doing good and making a difference. Rightfully, the organization has been celebrating all year long.
Says Mikulski, “We had a celebratory dance in March for those that we serve to, again, recognize their role in our success; we had a fiftieth anniversary reunion—a day of fun—at the Tinkham location in July for our current and retired staff and old board members; in September we had a 5K run/walk [5K for 5 Decades] in Dearborn. And our biggest event, our sixth annual STEPS to Success, was held in late October. It’s an evening to officially recognize those that made the year successful. We choose October for this event because October is National Disability Employment Awareness month (NDEAM).
With fifty years in the rearview mirror and a lifetime ahead, what, now, is in store for STEP?
“We’re at levels of about eighty percent pre-pandemic,” says Mikulski. “Our immediate plans are to make sure that our services continue to address the needs of those that were impacted by this pandemic. We want to make sure our programming continuously adapts to what we need to do to get folks engaged back into their communities—in the most efficient way possible. We want folks who look for our service to be able to find our service.”
Looking long term, however, Mikulski says STEPs focus has experienced a shift.
“The expectations and the interests of those we serve look dramatically different than we saw 10 or 15 years ago,” says Mikulski.
“Young adults that are entering our program for the first time want cool things that weren’t cool 20 years ago. With technology, social media, and all the other things, we have to adapt our program to meet the needs of who we’re serving. I see us continuing to do that, and our staff is ready.”
STEP’s mission is to support individuals in the pursuit of their chosen goals and the achievement of personal satisfaction in their lives. And it’s a task that invites the community to join in any way possible.
Says Mikulski. “Those who elect to donate, I think, can see [where the money goes]. We welcome folks to get a closer look at what we do as an organization, whether it’s in the thrift stores or some of our other forward-facing programs. You will really see what those contributions mean for those we serve.”
To inquire about volunteer or partnership opportunities at STEP, call (313) 278-3040. Additionally, one can view and purchase STEP’s Progressive Art Studio Collective artwork by visiting www.stepcentral.org and clicking the “shop” link.