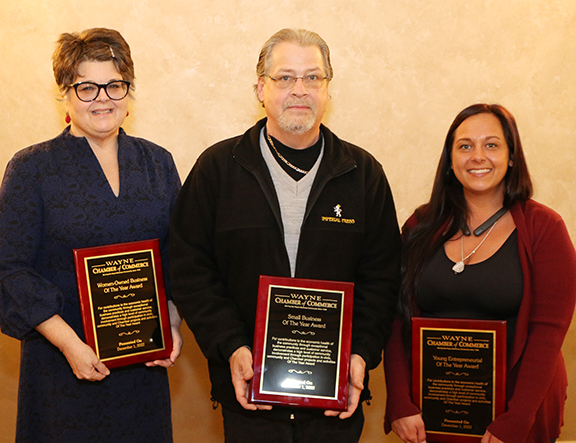 By Sarah Shurge – “It’s important to all the businesses to get acknowledged, and it’s exciting to win something,” said Chelsea Rushlow, Wayne Chamber President. “It’s kind of like a thank you for working so hard keeping the chamber afloat.”
The Wayne Chamber of Commerce is an organization in the city that is comprised of small businesses within the city. It is a networking organization. A promotion organization. An organization that keeps small businesses together and informed. “I love chambers. I belong to multiple chambers in Southeast Michigan. I love what they do for the community to keep local businesses thriving,” said Rushlow.
Each year, the chamber hosts an Annual Christmas Luncheon. This year, the luncheon was on Thursday, December 1st, at Wayne Tree Manor and winners for Businesses of the Year were announced.
There were five different categories for winners: Small Business, Woman Owned, Emerging Business, Veteran Owned, and Young Entrepreneur. Winners were picked by voting done by members of the chamber.
The winner for Small Business is Chuck Rushlow from Imperial Press. Chuck was one of the youngest chamber presidents and still finds money and time to support the chamber. The Imperial Press alone has donated over $10,000 dollars to the chamber.
The winner for Woman Owned is Kim White-Jenkins with Helium Studios. Kim not only has her studio featuring 100+ artists and makers’ local, indie, and handmade goods, but she has been known to help out with non-profits over the years.
The winner for Emerging Business is Tiffany Walker with Moonlit Mystic. Tiffany officially opened her store on Friday, May 13th, 2022. It is an edgy and eclectic metaphysical store unlike anything that exists in Wayne. You can find crystal carvings, jewelry, books, and much more.
The winner for Veteran Owned is Stan Shelton with J & S Portrait America Photography. Stan is a vet from November 1965 to October 1967 assigned at Fort Wright Alaska. After the army, he decided to pursue his true passion for photography and in 1989 he started his own Photography company.
Lastly, the winner for Young Entrepreneur is Chelsea Rushlow with Imperial Press. Rushlow has been in sales, printing, mailing and marketing since 2007, and while working for Imperial Press, she is constantly building business relationships and helping the community as much as she can.
Each winner received a unique plaque from the Wayne Chamber, engraved with their category title.
“It was awesome getting an award like that. It was one of the first awards that I have accepted in my life as an adult on my own,” said Rushlow. Rushlow has been an active member in the chamber since 2007 and a board member since 2019.
“I just want to acknowledge and thank businesses that have helped us out throughout the year and acknowledge what they do for the community,” said Rushlow.