Abicht gives the Zebras a leg up on the football field 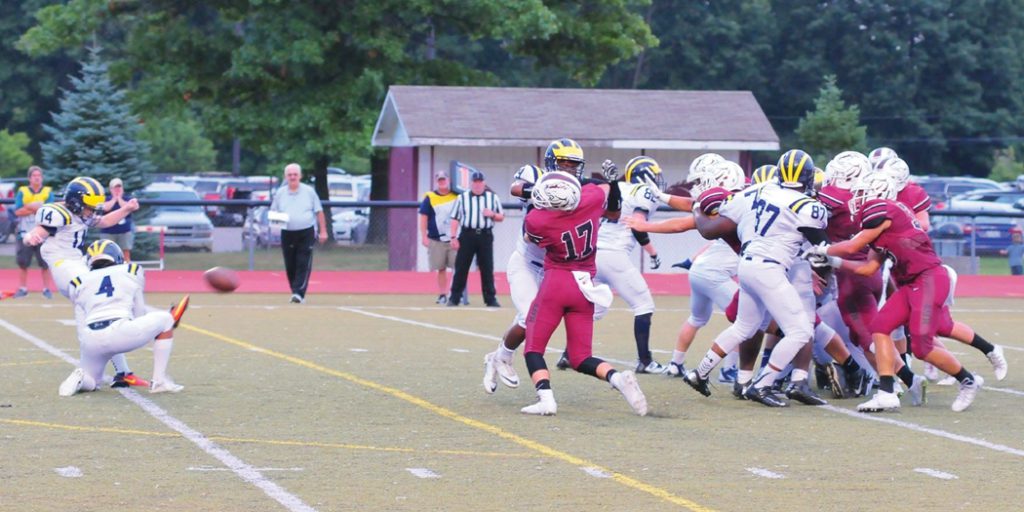 By Dave Merchant –  Sometimes learning to play a high school varsity sport your senior year can be difficult and sometimes all it takes is practice and a few kicks. Wayne Memorial High School Zebra senior Gillian Abicht has played soccer almost her entire life. When she heard the Zebra football team needed a starting place kicker she decided to try out.
With the urging of one her friends who is a captain on the team she tried out and now kicks for Wayne. Wayne Coach Donald Anderson couldn’t be happier with the talent he got.
“She came out and she has worked very well with the team,” Anderson said. “I think she has only missed two out of seven on the season and they both hit the uprights (by Sept. 30th).”
Since she still is playing soccer she cannot attend every practice.
“We work with her and her schedule,” he said. “We try and get her at least 20 kicks a day. I have seen improvement in her all season. Anderson said she is a joy on the team.
“She is a good girl,” the fifth year coach at Wayne said. “She fits right in. I like her attitude and I wouldn’t mind a 100 of her on the team.
Abicht admits soccer is her sport but says she really loves football and has always been a fan.
“I have played soccer for 13 years,” Abicht said. “This is such a different kind of sport.”
For her, managing the two sports and her time is very important and it keeps her very busy. Her parents have been totally supportive of her playing football.
Her parents are Jeff and Lisa. She has four sisters with her in the middle. From oldest to the youngest are Kristen, Maddie, Gillian, Allie and Adrien.
Allie is a sophomore at the school and plays in the band and is able to see her sister play football every home game. Adrien is in eighth grade and also plays soccer.
Abicht has some good advice for high school athletes to succeed.
“Manage your time with your school work and your sports,” she recommends. “That motivates me to get everything done. I always plan out my day on a schedule.”
She not only played in the homecoming game against Livonia Franklin but she was also on the Homecoming Court which was a big deal to her and her family.
“It was a lot of fun,” she said.
Much of her practice is with the special team’s coach. They work on the perfect technique and not making many mistakes.
In the homecoming game, because it was so rainy they talked about if a bad snap happened and the holder pitched her the ball if she would run it in the end zone.
With a smile she replied she wouldn’t mind doing that in fact she said she might like it.
Her number one goal at school is academics.
“I would like to go to school to be a physical therapist,” she said. “That is number one but if I can go to school and play soccer that is great, otherwise I can play intermural soccer.”
Having had a few sports injuries in her playing career like her knees has been a major reason why she would like to be a physical therapist.
“At the University of Michigan facility I went to, everyone was great,” she said. “I want to help people and I think getting helped myself would help me as a physical therapist.”