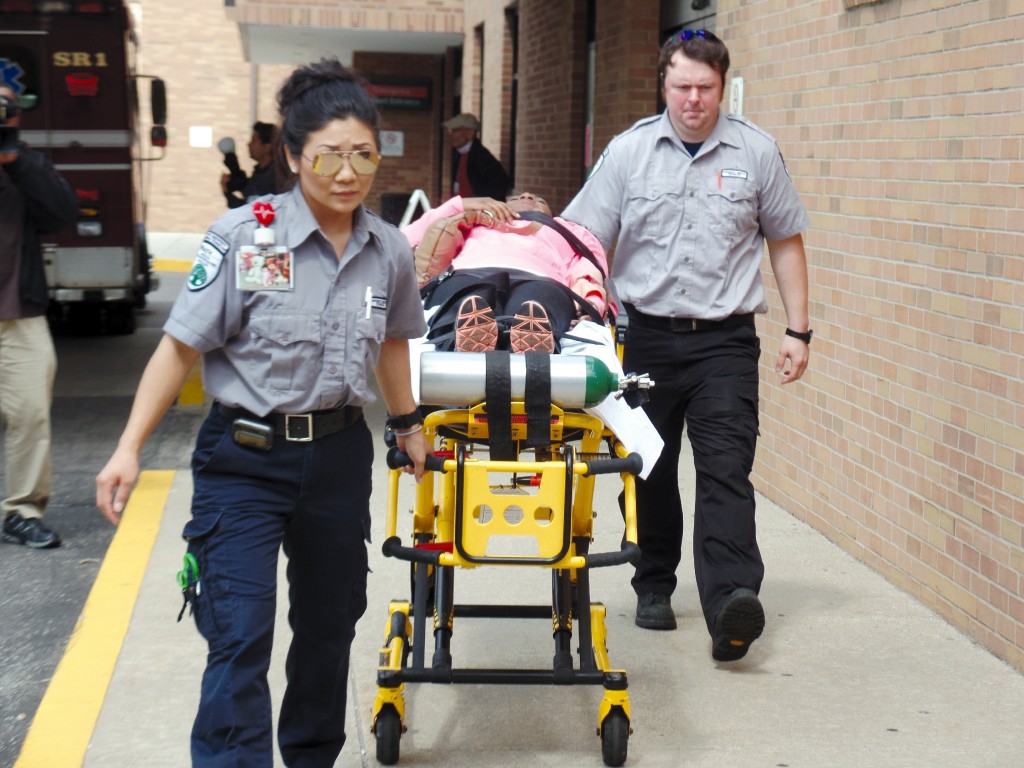 By Carolyn Marnon – On June 3, a plane crash scenario impacting the entire metro Detroit area required the use of Oakwood Hospital-Wayne’s facilities as part of a regional disaster drill that was held in partnership with the Wayne County Airport Authority and numerous other health and public safety organizations.  A disaster drill of this magnitude is conducted every three years. 60 “victim” volunteers were evaluated and treated for problems ranging from mild injuries to severe trauma.
“The drill provides Oakwood hospitals, our employees, physicians and volunteers the chance to practice what it would be like to treat multiple survivors with varying degrees of injury,” said John Cargill, RN, trauma and emergency management coordinator, Oakwood Hospital-Wayne.  “Drilling is the best way to work with your partners and drilling is the best way to know how you will respond as an individual facility or hospital.” Victims of the scenario were assessed by ground crews at the Airport and transported to the emergency departments located in Dearborn, Taylor, Trenton and Wayne.  All four Oakwood hospitals were practicing a mass casualty drill with patient tracking systems in place.  Oakwood Hospital-Wayne was the only site using live actors and the Beaumont Health System helicopter to reenact victim arrival, transport and triage services. In addition to the live actors, some patients were simulated using bags for the body and a balloon for the head.
“The drill is designed to improve hospital and community preparedness while improving communication and cooperation between the agencies,” said Cargill.  “This training session also tests how officials work together to respond to a disaster scenario such as this one.”
During a disaster, workers wear fluorescent yellow vests clearly marked with their role: EMS, triage, charge nurse, etc.  Emergency Department Specialist Michael Salliotte had been a paramedic for 12 years. Now he helps facilitate where patients go in the mayhem of a disaster and controls family members and media.  As a burn victim arrived, Michael helped her out of the vehicle and into a wheelchair.
Although the action outside the emergency room seemed slow immediately after the disaster, Michael attributed it to the magnitude of the disaster.  If a large disaster were to occur, everyone could not be accommodated at once.  Patients would be triaged in the field and prioritized for movement to a hospital.  There aren’t enough ambulances available all at once, so someone could be at the disaster location for a long time before being brought in.
One entry is used to control the patients coming in.  Once at the door, each patient has their triage tag looked at and then he/she is directed to a pod for treatment.  As one patient was wheeled to the door, she was asked, “Ma’am, do you know where you are?” “A hospital?” was the reply as she was directed to Bed 24 in Trauma.