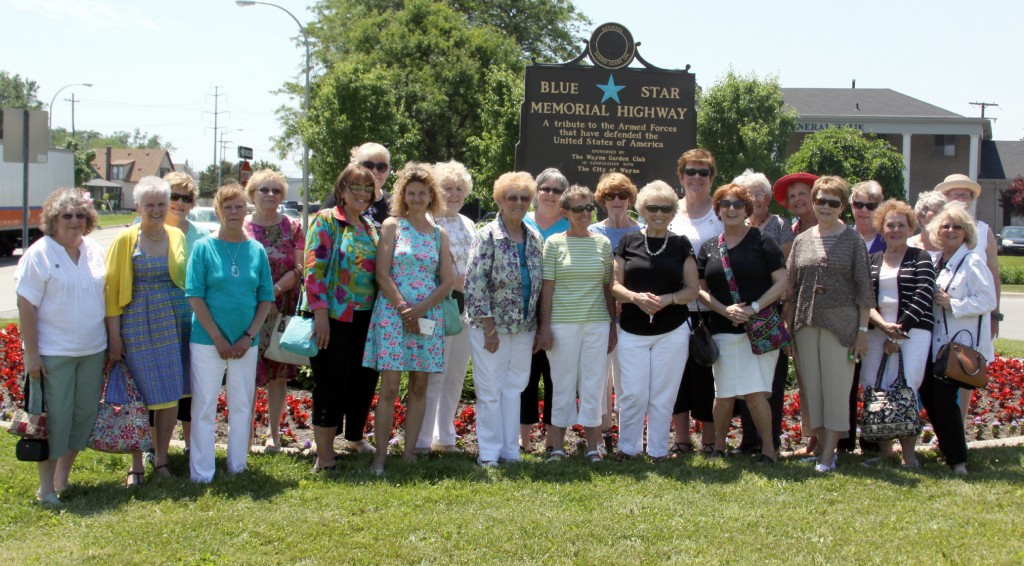 Members of the Wayne Garden Club stand in front of the new Blue Star Memorial Highway marker on Michigan Avenue in the median in front of Harry J. Will Funeral Home. Photo by John P. Rhaesa

By Carolyn Marnon – The Wayne Garden Club started June off with their annual salad luncheon held at the First Congregational Church of Wayne on June 10.  Immediately following the lunch, club members, city officials and other interested citizens headed over to the little parcel of land across from the Harry J. Will Funeral Home where Michigan Avenue splits to attend a brief dedication ceremony for the new Blue Star Memorial Highway Marker that was recently placed there.
The Blue Star Memorial Program, administered by the National Garden Clubs, honors all men and women who have served, currently serve or will serve in the US Armed Forces. There are two types of markers: a highway marker which can be placed along highways and at highway rest areas and a memorial marker that can be placed at cemeteries, parks, gardens, and other appropriate civic locations.  A Blue Star Memorial Marker was dedicated at the Veteran’s Plaza outside the Wayne Public Library in 2014.  The Wayne Garden Club obtained the second marker by happenstance.  When the original Memorial Marker was ordered in 2014 for the Veteran’s Plaza, the club received a highway marker by mistake. Rather than destroy that marker, the club was instructed to keep it and use it.  The club allowed some time to pass before coordinating with city officials to have the second marker installed.
Ruth Wenzel worked diligently to obtain the first marker and then to get the second marker installed and dedicated. She was assisted by Alicia Marnon who collected recipes from club members, put together a cookbook, and sold it at Farmer’s Market and other events to raise the funds to purchase the first marker. Mike Buiten, Engineering Manager, was important in locating the place for the marker and Dan Hamann, Assistant DWP Director, and his crew helped get the marker in the ground.  Cookbooks are still available for $10 and proceeds will now be used to further other garden club projects.
Wayne is the only city in Michigan that has 2 Blue Star markers.
Rain showers could not stop the garden club’s biannual garden walk on Saturday, June 27th.  Seven gardens were featured this year along with a stop at Brenda’s Butterfly House at Barson’s Greenhouse in Westland.  Della Danielson’s garden featured different chairs displayed with flowers. This year, she also displayed a late 1800s wooden wheelchair topped with a pot of flowers. John and Sheri Blair invited guests into their yard that featured a large butterfly garden. Last year, John was able to attract 26 different species of butterflies.  In the spring of 2012, the garden was officially certified as a Monarch Waystation for migrating Monarch butterflies. The garden was also featured in the August 2014 issue of Fine Gardening magazine.
Jean Goring thinks of her garden as a “social gathering” because so many of the perennials used throughout her garden were given to her by friends and family or were from some event in her life like a wedding, mother’s day or birthday.  Her yard is a certified natural wildlife habitat. She accents her garden with pieces of art she designs–gazing balls, butterfly baths, feeders and bird spas.  Enter Cheryl Zilka’s garden through a garden trellis/gate and enjoy the koi in her pond. Her home is along Second Street where construction is taking place.  She even had a planter of flowers along the corner curb to dress the area up.
Lynn Higgs and Carol Darin share a garden that divides their properties as neighbors. Lynn’s garden is all shade in the backyard, much of it planted with hostas.  She has a large bunny rabbit figure that sits in the midst of her plants. Carol’s garden features a pond.  The area behind her garage became her vegetable/fruit garden with a path.
The final garden of the walk was at Maureen Davidson’s in Westland.  She had a 1500 gallon pond and split waterfall which takes up most of her backyard.  There is no grass. Although day of the walk ticket sales were slow, the rain didn’t deter approximately 80 avid gardeners who set out to see what possibilities existed for their own gardens.
If you have a garden you want to share with others, contact Carolyn Marnon to be put on a list for consideration on the next garden walk in 2017. She can be reached at 734-721-7660 or by email CarolynMarnon1@gmail.com.