Bar gets makeover just in time for summer

By : John Rhaesa
Comment: Off
Tag: Bob Seger, Daiquiri Shack, Iggy and the Stooges, Rock and Roll Farm, US 12 Bar and Grill on W. Michigan Avenue 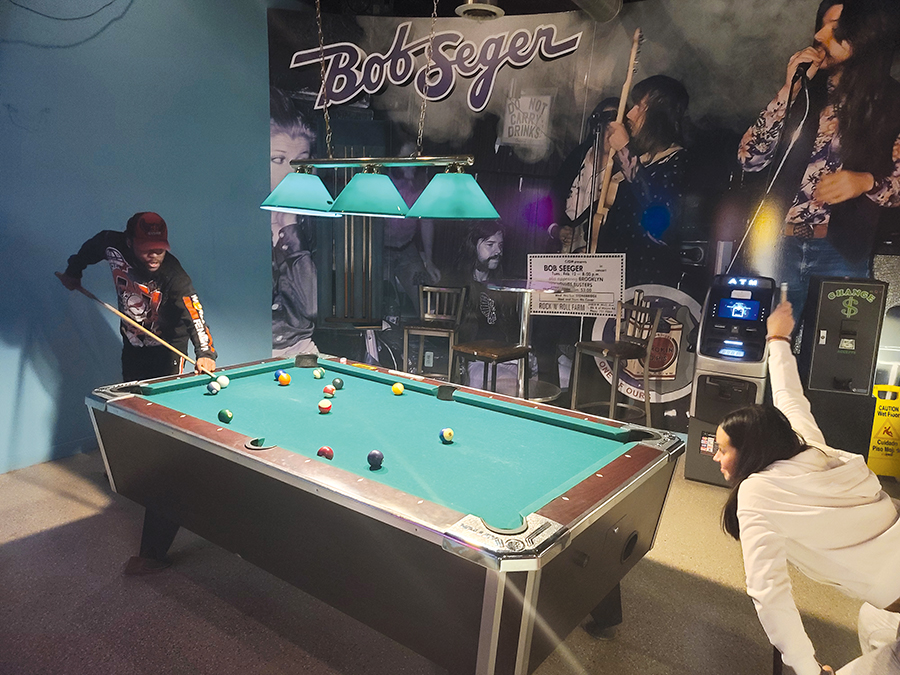 Patrons play pool in front of a life-size mural of Bob Seger. Photo by John Rhaesa

By Carolyn Marnon – When he wasn’t helping local residents by selling items during the pandemic that they couldn’t find elsewhere (hand sanitizer, toilet paper, disinfecting products to name a few) by using his restaurant business contacts, business owner John Goci was busy renovating US 12 Bar and Grill on W. Michigan Avenue.
One of those renovations is in an area that Goci says hadn’t been touched in years. That area is now the Daiquiri Shack complete with a fully-stocked tiki bar. The Daiquiri Shack had a soft opening last month. The light and airy tropical vibe makes this a great place to relax when you can’t travel to the real tropics. Recent drink specials included Hurricane, Sun of a Beach, Blue Pearl, Mojito, Bay Breeze, Rum Rusher and flavored frozen drinks. Relax by the “beach” in a comfy beach chair while sipping a delightful daiquiri. It’s one of the best ways to travel to the beach without leaving the city.
The other half of the renovation includes life-size murals on the walls featuring artists such as Iggy and the Stooges and Bob Seger, both of whom performed at the bar when it was called the Rock and Roll Farm in the 1970s. Seger played at the location three different times. Aerosmith also played at the bar.
Goci has included little bits of the former bar’s rock and roll history around what is now the Goci family bar. He acknowledges that many famous acts have played at the site. The old bar’s owner, Leo Speer, also owned the old Michigan Palace Theatre in Detroit. Speer would get acts that appeared at the Palace to come out to Western Wayne County to play at his small Wayne bar.
As a result of an article about the rock and roll renovation in the Westland Observer, Jim Rothwell of Plymouth sent John a copy of a poster he had gotten on December 3, 1973 when Bill Haley and the Comets performed at the Rock-n-Roll Farm. Jim says he sat through both shows and was able to get some autographs on the poster including that of Bill Haley.
In Your Time, make some Night Moves, and come enjoy some Old Time Rock & Roll. We’ve Got Tonight. C’est Le Vie.