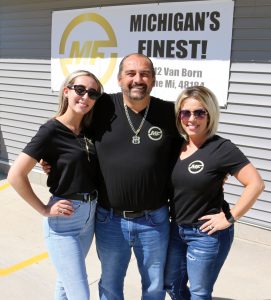 Scott Gocaj, with his daughter Hanna and wife Rachel are proud to receive the first Recreational marihuana license in the City of Wayne.

By Carolyn Marnon – Prior to the 20th century, cannabis was found in pharmacies to relieve migraines and various pain conditions. Many online resources state that problems with cannabis started in the early 1900s when the US had an influx of Mexican immigrants. These immigrants brought with them their culture and customs, one of which was smoking marihuana. Law enforcement officials in Texas thought marihuana incited violent crime in users and that the immigrants were distributing it to American schoolchildren. By 1931, at least 29 states had outlawed the Jekyll and Hyde drug. The American Medical Association is said to have objected to the illegalization because of the plant’s medicinal benefits.
Michigan’s Finest, located at 39112 Van Born Rd in Wayne, is the first cannabis company I have ever been to. I was to meet the owner, Scott Gocaj, a longtime Wayne businessman whose family has overseen the US 12 Bar and Grill for decades, to tour his brand-new business. Located off a gravel road alongside Van Born, there were plenty of signs along the road to guide me in.

As I pulled into the parking lot, I was greeted by Rico, a uniformed security professional. He asked the reason for my visit and then directed me to a designated parking spot. There is one area for medical marihuana customers and one for recreational customers. The one-story grey building is well-maintained amidst the undeveloped land that surrounds the business.
As I stepped inside the door, I was immediately drawn to the large TV and the fireplace in the lobby. Employees dressed in matching MF t-shirts and black pants were engaged in various activities-folding t-shirts, filling orders, handling payments and staying busy. All were wearing masks to protect each other from COVID-19.
Doug showed me the office where Ashley was waiting for orders to come up on an iPad nearby. Once an order comes in, she will make sure a Cannabis Consultant gets the order and fills it for pick-up. Because of COVID-19, all business is conducted online or with a consultant armed with an iPad at the customer’s car window. The Cannabis Consultants are all “tried and true experts” in cannabis products and can help customers make selections to fit their needs.
There are several monitors throughout the building that display what is going on in various areas of the business, one of the safety features throughout the facility. Every time the front door opens, there’s a loud bell that keeps everyone aware of comings and goings.
When we walked into the retail sales room, my first thought was “This is an adult candy store!” Packages were neatly hung on the walls with space between each item so you could easily make out what you were looking at. 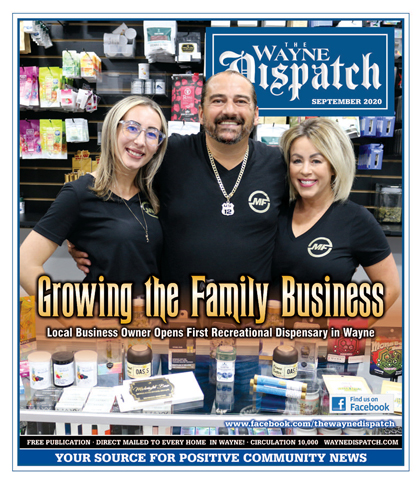 Doug explained that one wall and glass cabinet held all the medical cannabis products while the other wall, not nearly as large, held the recreational products.
I wondered out loud why the medical and the recreational had to be separated. If both were now legal in Michigan, what difference did that make? Apparently, it makes a lot of difference. Customers who use marihuana medically can save money, but there is also more state regulation over it. Doug says the business has to obtain more information from these customers than they do from the recreational users. Because of state regulation, medical products cannot be bagged with recreational; they have to be kept separated.
I asked what an average buy would be. I was told it really depended on the type of customer. There are those who purchase for daily use. There are those who purchase based on a certain budgeted amount. There are senior citizens suffering from chronic pain who may place an order once a week for enough to get them through the week. There is more consistency to purchasing on the medical side.
I was amazed at the variety of products available. As I browsed over the recreational side of the room, I was seeing products like crispy rice squares, brownies, chocolate chip cookies, caramels, mints, gummies. All items were in sealed packages. There were several rows of clear jars containing what looked to the untrained eye like dried up clover flowers. These were referred to as flowers, or buds. My eyes landed on a jar marked Stuffed French Toast. The flowers are the #1 seller.
Did you know you can buy peanut butter and butter infused with cannabis? A small jar of either retails for $16.
Like alcohol consumption, the tolerance level for each individual is different. For a first timer, it is recommended that one start with a light potency flower or perhaps a gummy. Cut the gummy into quarters and start with just one quarter. You can then add another quarter as your tolerance level builds up.
Evelyn, one of the Cannabis Consultants, informed me that edibles were dangerous for a first timer. It can take 45 minutes or longer for the cannabis to activate in one’s system and if you’re not feeling anything, you might consume more. She likened it to pharmaceutical drugs that have time-lapse properties. The worse that would happen in the case of ingesting too much marihuana, she laughed, was that you would become a couch potato and get lots of rest. The flower, on the other hand, tends to provide a psychoactive reaction in 10-15 minutes.
I was told about a gentleman in his late 70s who stopped eating due to kidney failure. He was given edibles which activated his appetite to eat again. “It helps different people with different ailments in this world,” said Scott.
The process Scott and Doug have set up at MF is very simple. Doug is proud they were able to copy other smart businesspeople and make those ideas work for Michigan’s Finest. Doug likened it to the processes that Amazon uses to move its products. MF has been open since July 10 selling medical marihuana only. It is the first licensed marihuana business in Wayne to start selling recreational marihuana August 16, and according to Scott, the only one actively selling. It is also the closest cannabis business to the airport.
The consultants are impressive with their knowledge. I was even more impressed by their educations. Liam is finishing his Masters degree in Accounting at Michigan State. Hanna just graduated with a Bachelors degree in Communications from MSU. Doug is also finishing a Masters degree in Business. “We’re not a bunch of potheads,” he asserts. There are weekly business meetings in finance and marketing. The number one focus is on customer experience.
Safety and security are also top concerns. The building is reinforced. There is 24-hour armed security licensed, bonded and insured by the State of Michigan.
Scott said the City of Wayne determines the hours MF can be open. Currently, it’s open Monday through Saturday 9:00 a.m. to 8:00 p.m. and Sundays Noon to 8:00 p.m. With fast, efficient and friendly service, you can have the products that will meet your needs quickly. As the business grows, Scott assures me “I’m going to spoil my team.” Mention is playfully made of Italy where employees have 2-hour lunches and paid vacations.
The State tracks everything, so Scott says the business has to be accountable for all their product. The State can do unannounced visits twice a year. They can look at anything, he says “because we have nothing to hide!” He doesn’t have as many options available of recreational marihuana as he does medical, but he says they are building the inventory.
Hanna, Scott’s daughter, worked at a cannabis dispensary in Lansing. She’s an advocate for the medical marihuana community as she saw how it helped people with cancers or who suffered from pain-related injuries. She feels blessed that she is able to work with her father in the family business. “The cannabis industry has evolved a lot,” she said.
Scott has stepped away from US 12 Bar and Grill in Wayne, the business his parents started decades ago and which is now being run by his brother, John Goci, who also maintains a real estate business. Scott is making MF his main focus and working hard to grow his own family business.
MF has a program called Bud Genius. You can book an appointment online with a Bud Genius and learn more about marihuana and the various products. Scott and his team are eager to educate anyone who wants to learn more. He wants to eradicate the stigma that marihuana has and knowledge is key to that.
“Our mission is to ensure our patients have the finest cannabis experience by combining top grade products with our friendly and knowledgeable team members.”

The “road of the future” coming to Wayne