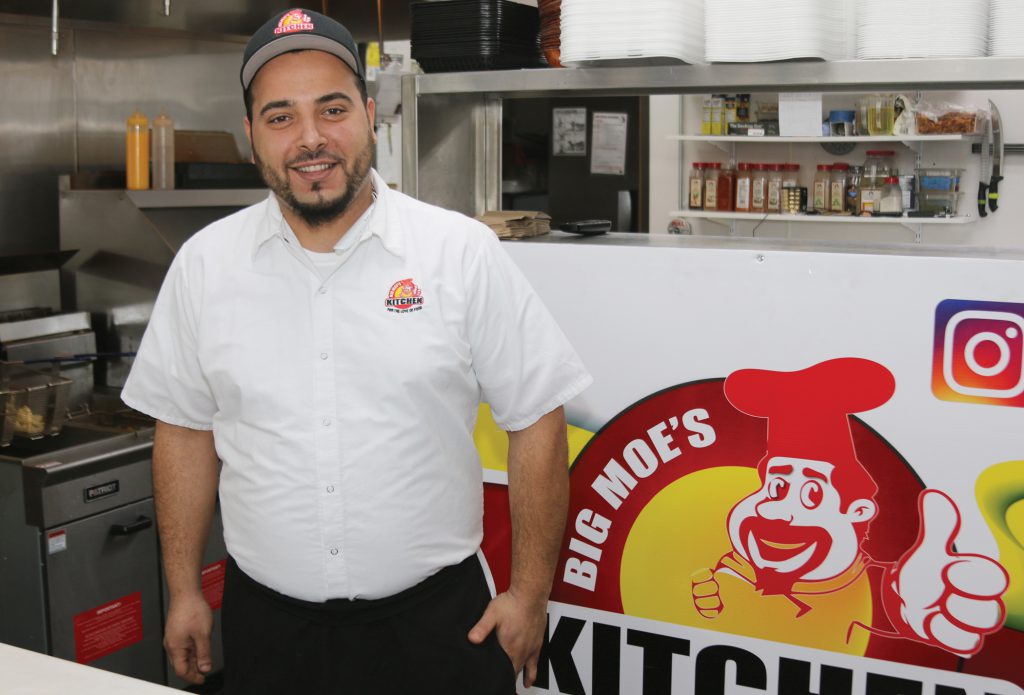 By Carolyn Marnon – You may drive by it every day and not know it is there. Inside the Citgo gas station at the corner of Elizabeth and E. Michigan Ave is Big Moe’s Kitchen. Open since November 15, 2016, it has been raved about on Facebook as having great food and service.
The owner, Moe El-Hamawi, is the only cook in this kitchen. He has been cooking for 14 years, graduated from Schoolcraft’s Culinary Arts program and formerly worked at the Detroit Athletic Club.  His friend owns the station and one day mentioned that he had a partially done kitchen inside the station from a deli that never opened. “I decided to just go for it,” says Moe.
He had to put in vents and gas lines to get up and running. He is the cook. He has someone who comes in to help with cashiering and answering the phone. There are tables for those who want to dine in. While you wait, you can hear food sizzling on the grill or in the fryer.
Business has been great, says Moe. People are coming back to buy more. He said opening in Wayne was a big challenge due to the city’s financial situation. He took a risk thinking that if the food is good, he would do good. He also says Moe’s and Citgo help each other. After ordering, customers will wander over to the gas station area to buy their chips and drinks. People who are there to buy gas may wander over to buy something to eat.
Moe describes his menu as Middle Eastern-American burgers. “Whoever comes into the door, they’re going to find something they like.” He doesn’t have a specialty other than his specialty being making great food, he says. He said he has had no complaints on his food. He wants to thank everyone in Wayne for their support, their great support, thank you for their trust and for the Wayne Neighborhood Discussion Board on Facebook for getting the word out about his food.
Big Moe’s Kitchen is open Monday-Saturday, 11:00 a.m.-10:00 p.m. They are closed on Sunday.
Moe says they will deliver within a three mile area.