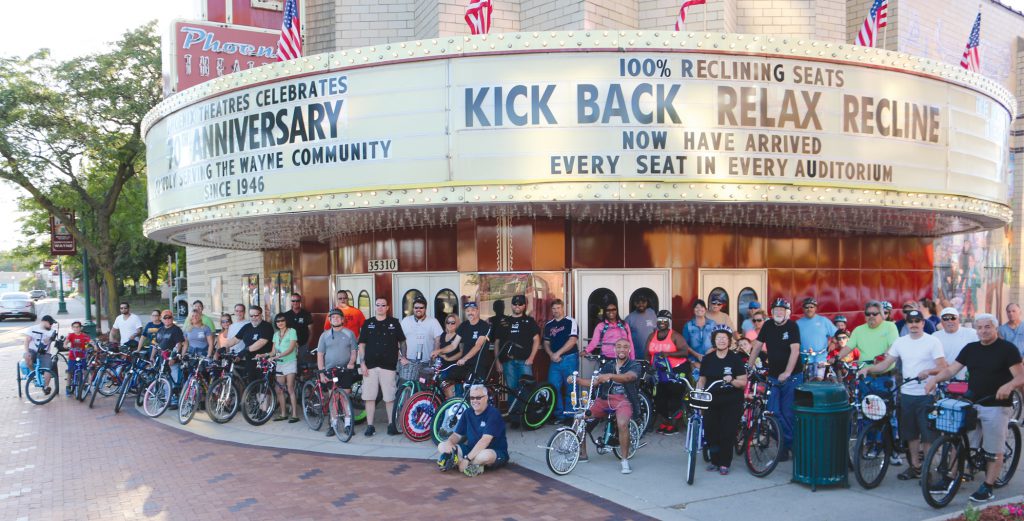 The Wayne Bicycle Club meets up Thursdays at 7:30 p.m. in front of the State Wayne Theater. Photo by John P. Rhaesa

By Carolyn Marnon – Brian Ewanciw, owner of Icon Computer Solutions, and his girlfriend Jamey McCloskey bought bicycles last year and started riding. They soon found that bike riding was boring when it was just the two of them. They asked a few friends if they wanted to ride with them and then go to a local bar for a drink afterwards. Brian decided to expand their small group of riders by starting a Facebook group called Wayne Bicycle Club. Nine people showed up for that first advertised ride. Since then, the group grows and grows every week.
The largest group that has gone out for a ride has included 68 people. The Wayne Bicycle Club did a cemetery tour last fall. They have also connected with other bicycle clubs in Detroit for rides. Recent group rides have included one on Belle Isle, a Saturday riding through Hines Park, and participating in the Westland Memorial Day Parade.
The bike scene is big in California, said Brian, and is coming across the US. It’s a very family-friendly environment. Recently, a couple riders have shown up to the Wayne rides with bike trailers attached for their little ones to ride along.
This summer, the club hosted a volunteer docent from the DIA (Detroit Institute of Arts) to lead the group on a tour of the artworks displayed around the city from the 2017 Inside/Out program. Riders listened as the nuances of each painting were presented. Some took photos of the paintings while they listened. The riders interacted with the docent and asked questions. When the presentation was done at that particular art piece, the group hopped on their bikes and pedaled to the next piece.
The Wayne Bicycle Club will host a free bicycle clinic at the August 8th concert in the park where riders can get their bicycles checked out and learn some basic ways to keep their bike maintained and safe.
The Wayne Bicycle Club welcomes riders of all ages. There is no need to sign up for a ride, although Brian said if you can indicate on the Facebook page that you are interested in going, that helps him get an idea for how many people are going to show up. The rides are slow-moving rides. They are a great low-impact exercise to keep you in shape.
Most rides are approximately 8 miles. The Facebook page will show a map of the intended route for the week’s ride. If you don’t think you can do the whole route, you can look at the map and determine how far you want to go and where you would need to break off from the group to return home. You can drop out of the ride at any time. There is no obligation to complete the whole thing. 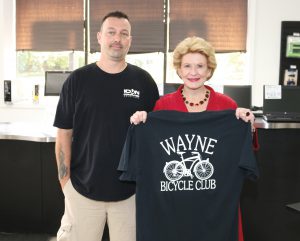 Brian says he tries to plan the routes to stay away from the major intersections. With a large group, it could take as many as three light changes before everyone gets through. The rides meander through neighborhoods that are conducive to bike riding.
More and more custom bikes, also known as show bikes, are appearing at the local rides. Whatever type of bike you have, you are welcome to ride it with the group. Brian says many first-time group riders show up and see all the lights that other riders have on their bikes. The next time they show up at a ride, they have lights too. It seems that riders have more fun when they are riding with lights flashing on their bikes or lights spinning around their wheels.
After the ride, riders are welcome to gather at either The Avenue or US-12 for a bite to eat or a drink. The group tries to alternate between the two businesses.
If you would like to ride with Wayne Bicycle Club, check out their Facebook page for details about the upcoming ride. The group meets every Thursday night outside the State Wayne Theater for a ride that starts at 7:30 p.m. It’s a good idea to bring a bottle of water to stay hydrated. Also, if it is getting near the end of the bike-riding season and darkness is going to be involved, make sure to have a headlight and taillight for your bike.
Brian reads a few rules of the road before each ride. Most of them, he says, are common-sense rules such as never riding more than two people side-by-side and to wait at lights.
Besides the regular Thursday night rides, Brian is making plans for another Belle Isle ride, a ride through Metro Park and a ride at the Detroit RiverWalk. Bike riding is growing in popularity in Wayne. The City of Wayne and other community groups are working together to expand opportunities for safe riding. Icon Computer Solutions is working with the city and Wayne Rotary to bring bike racks to town. Brian would like to see more done to make Wayne more bike-friendly, including eventually being able to connect with the I-275 bike trails and having dedicated bike lanes.
As John F. Kennedy once said, “Nothing compares to the simple pleasure of riding a bike.”