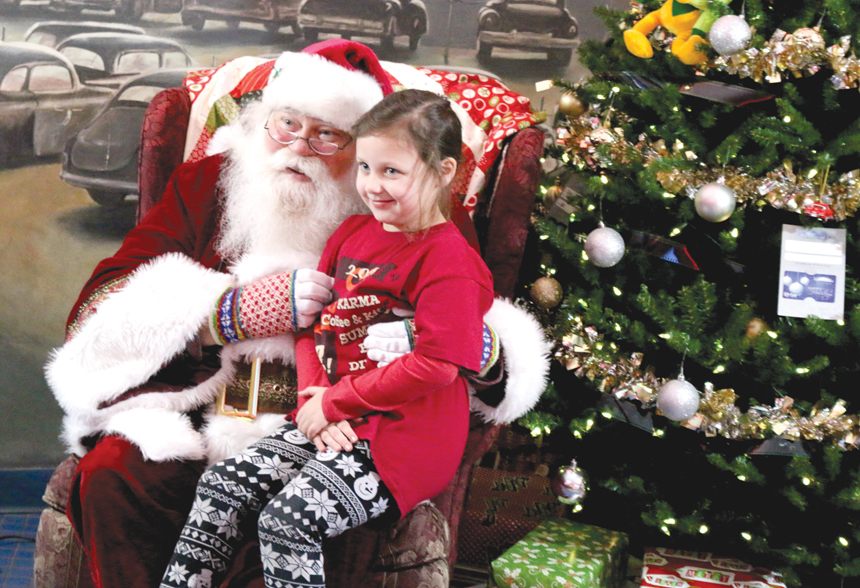 Isabella Romero tells Santa what she wants for Christmas at the State Wayne.

By Carolyn Marnon – Christmas will be here before we know it! As the adults rush around to get the holiday lights up before a blizzard, too much snow or ice accumulates, and get the inside of the house decorated, and bake cookies and shop for all their favorite people, the children are all eagerly awaiting the arrival of the big man in the red suit.
In the very first issue of The Wayne Dispatch (November 2008), former Dispatch editor Jenny Johnson asked children for their answers to some Christmas-related questions. We thought we would revisit the subject to see what is lurking in the minds of our young residents who attend 2nd grade at Taft-Galloway Elementary School (with a few first and third grade responses thrown in where indicated.)

What is Santa’s favorite cookie?
Mitchell says it is sugar cookies in the shape of Santa. Trinity also said a Santa cookie. The most popular answer was actually chocolate chip cookies. Other answers included gingerbread, mint, ninja, chocolate and Oreo chocolate.

How in the world does Santa eat all of the cookies and milk that are left for him on Christmas Eve?
He goes in the house and eats them. He never gets full-Jordin
He probably saves some for later-Alex
He has powers to eat a lot of stuff like cookies-Mitchell
He hurries up and eats them before 24 hours-Trinity
He takes two at a time and drinks the milk fast-Joel
He puts the extras in his bag-George, 1st grade
He has a big stomach-Kail

How does Santa know which homes to visit?
He goes around the world and goes in a line-Jordin
He knows which house by the Christmas notes-Laine
He has a list to go to good and bad people-Mitchell
He uses a map-Kennedy, 3rd
He’s smart-Douglas, 3rd
He checks his list-Trinity

How does Santa get to be everywhere at once?
He uses his magic deer to go places-Douglas, 3rd
He has a reindeer that goes super fast-Trinity
He is fast at putting presents down-Joel
His sleigh-Alex

How do you recognize Santa in a crowd?
He will have a white beard and say “ho ho ho”-Laine
He has a black belt-Joey
He has a long beard and lots of red on-Joel
He wears a red suit, and his belly is super big-Mitchell
I look for a red and white suit-Trinity
He has a hat, and red and white clothes-Alex
Santa wears red clothes-Jordin

How does Santa get into your house?
He uses his magic-Laine
Sometimes I leave the back door open and Santa gets in-Kail
He uses a secret key and he opens the door and then gives me presents-Jayden
Your chimney or if you don’t have a chimney you can put out a key-Alex
He climbs in the chimney-Trinity

If you have kids celebrating Christmas with you, perhaps you can ask them these questions and record their answers and ages. It could just become one of those treasured traditions you will look upon with fondness.

Holiday Night, fun for everyone