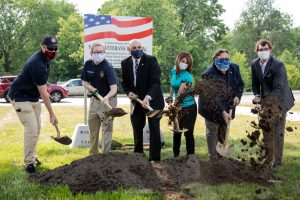 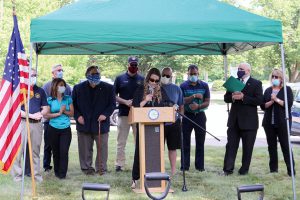 As plans moved forward, the committee focused on fundraising efforts. In 2019, the committee had raised $10,000 dollars more bringing the total to $30,000.00 dollars. In 2020, the Wayne Veterans Memorial Committee submitted the project to the Michigan Economic Development Corporation in an attempt to qualify for the Patronicity campaign which would match donations dollar for dollar over a selected period of time. The M.E.D.C. accepted the project and the committee set the goal of $30,000.00 dollars, which would double to a $60,000.00 figure if the fundraising campaign was successful.
In February 2020, the Patronicity Campaign went live and the fundraising began at a steady pace. Unfortunately, when the pandemic hit in late March, the donations stopped. The M.E.D.C. Patronicity team provided the committee with an option to extend the fundraiser. The committee decided to extend the campaign another month hoping to meet or exceed the $30,000.00 dollar goal. In May 2020, the Patronicity campaign, with the help of the Wayne Downtown Development Authority who donated $10,000.00 dollars and many generous donors from around the country, the committee had exceeded the $30,000.00 dollar goal and raised $35,000.00 dollars. The Patronicity campaign matched the $30,000.00 dollars which brought the total raised to $60,000.00 dollars. As donations continued to pour in, the total amount raised for the Wayne Veterans Memorial was $101,000.00 dollars.
In the fall of 2019, United Auto Workers Local 845, contacted the committee and offered to donate the monuments in front of their local to the City for the Wayne Veterans Memorial Project. The committee gratefully accepted the donation and the monuments have been incorporated into the project. The U.A.W. monuments represent all five branches of the services including; the United States Army, United States Navy, United States Marines, United States Air Force, and the United States Coast Guard. U.A.W. Local 845 also relocated their offices from Plymouth to Wayne earlier this year.
While there is still much work to do, the cement slab is in place, the memorials have been placed, and designated Veterans Parking is on track. The memorial will soon see a new flag pole, lighting and the committee will be discussing plantings in the near future.
Benches for the memorial have been donated by Mayor Pro Tem Tom Porter, Bonnie Porter and their family, Councilman Kevin Dowd and his family, and Chris Miller, citizen and member of the Wayne Veterans Memorial Committee and Lisa Nocerini, City Manager and member of the Wayne Veterans Memorial Committee. The bench donated by Miller and Nocerini will be in memory of Lloyd Allen.
The committee is planning a ribbon cutting ceremony that will be held in the fall. The committee is still seeking donations for future additions to the memorial including but not limited to signage; honorary plaques or bricks; and for the upkeep and maintenance of the memorial. Donations can be mailed or dropped off at Wayne City Hall located at 3355 South Wayne Road, Wayne, MI 48184. Please write “Wayne Veterans Memorial” in the memo line on checks.
The City of Wayne would like to thank the members of the Wayne Veterans Memorial Committee for their hard work and dedication to this project.
Mayor John Rhaesa, Mayor Pro Tem Tom Porter (Veteran), Ed Queen, Assistant Director of the Wayne Department of Public Works (Veteran), Mike Buiten, Director of the Wayne Building and Engineering Department, Mike Smith, citizen and member of U.A.W .Local 900, Chris Miller, citizen and member of U.A.W. Local 900, Alison Hug, U.A.W. Local 845, Lori Gouin, Wayne Community Development Director, Kathryn Sample, Wayne Finance Director, Lisa Nocerini, City Manager and Lloyd Allen, citizen, retired member of U.A.W. Local 900, and honorary committee member.