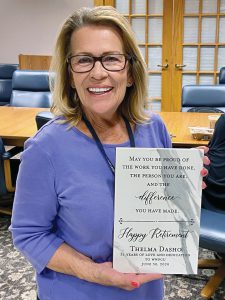 By Carolyn Marnon – Thelma Dasho isn’t blue about retiring after 39 years spent at Wayne Westland Federal Credit Union. She’s looking forward to the blues. The blues that she’ll be gazing upon when she soon moves into her lakefront home on Zukey Lake in Pinckney.
As a junior at St. Mary’s High School in Wayne in 1967, Thelma was granted an afterschool co-op position at what was then named Wayne Community Federal Credit Union, located at Sims and Second St. She did light office work before advancing to become a teller. Shortly thereafter, she took on the challenging role of Cash Supervisor. She held that position for approximately five years before she moved into the accounting department where she continued her managerial role.
Like other young mothers at the time, Thelma stepped away from her job in the early 1980s to raise her two youngest daughters. After a few short stints at a couple of other local credit unions, Thelma returned to her banking roots by becoming assistant manager at the credit union, whose name had become Wayne Westland Federal Credit Union in the intervening years.
Within a year of her return, Thelma was offered the role of Chief Executive Officer (CEO). She graciously accepted the challenging position. During her 30-year tenure as CEO, Thelma led her team from being a $26 million credit union to one that now has $123 million in assets. What led to this success? “Number one is supporting and believing in my staff,” said Thelma. “Then designing our new credit union office on Wayne Road and seeing it come to life.”
“Everyone here at WWFCU is highly dedicated to the membership. We encourage member feedback and continue to meet their financial needs…I have always believed in the credit union philosophy of people helping people and that each and every member is a part owner of this credit union. We constantly try to improve our service to our members. By the responses of our member surveys, it is working. They mention the word ‘love’ a lot,” said Thelma.
After a combined 39 years of dedication to the membership of the credit union, Thelma stepped into the next stage of her life, retirement, at the end of June. After being a Wayne homeowner since 1972, “I purchased a lake home in October 2019 and am currently doing some remodeling to the lake house before I move in. I look forward to the many new adventures of living the lake life.”