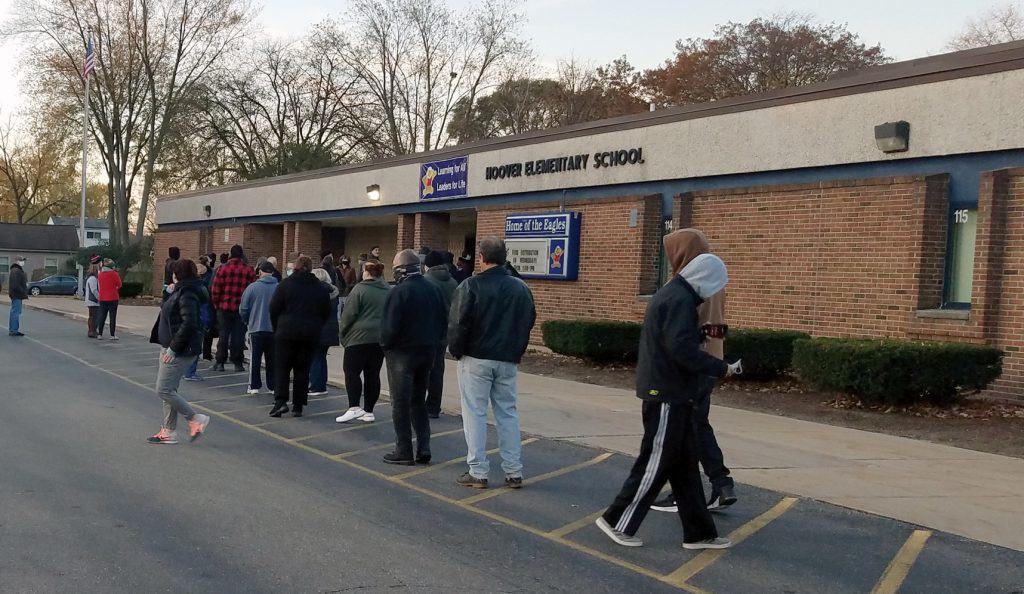 Voters were lined up out the doors to vote at Hoover Elementary School on election day.

By Carolyn Marnon – Mayor John Rhaesa was elected to serve a second term as Mayor of Wayne, in a tight race with current city councilman Anthony Miller. Although Miller did not win the mayoral race, he does retain his city council seat.
Mayor Rhaesa shared on his facebook page his gratitude. “I want to take this opportunity to thank each and every one of you who supported my re-election as Wayne’s Mayor. I am truly honored to have been chosen to serve another term. I had the incredible opportunity to talk to the citizens of Wayne throughout the day yesterday (election day) and while I was happy to see everyone out exercising their right to vote, it was also an opportunity to learn more about your concerns, to share the city’s accomplishments and connect with the community. Thank you to those who took the time to get to know me and to learn more about our city. As I have always said, I do not take the role of Mayor lightly. I will continue to work hard on behalf of every citizen for the betterment of our community and I will work with my colleagues on council and with the city administration to make sure that we are moving your community, our community, in the right direction. Again, thank you for putting your trust in me.”
City councilmen Tom Porter and Kevin Dowd were both elected to retain their council positions. Alfred Brock was elected to serve his first term as a Wayne councilman; he will fill the seat previously occupied by Jeremiah Webster whose term has come to an end.
There were two proposals in Wayne relating to how council persons were elected in the City. Both proposals were passed by the voters. The one with the higher number of votes is the procedure that will be implemented.
With a vote of 3957 to 3935, the majority voted to eliminate the six-ward system and return the City to a single voting district for the election of council members. This will take effect in 2024.
The Wayne-Westland Community School Board will welcome two new trustees, Kimberly May and John Albrecht along with returning board trustee Melandie Hines. Each will serve a six-year term.
May wrote on her election facebook page “I am beyond grateful for each and every vote I received!!!! I am excited and ready to work for our children! I am appreciative of each candidate and look forward to joining the Board of Education with Melandie Hines and John Albrecht. Congratulations to each candidate! It takes great commitment and heart to run a campaign. Thank you, Wayne-Westland community for believing and trusting in me!!!
Albrecht commented on his facebook page, “When I cast my vote, my first consideration was for the children for whom we are all responsible… Why our children before anyone or anything else? Because as our children grow and learn, we can be assured that their knowledge and experience will help to grow and make our communities better places to live. This matters above all else.

Is the pandemic changing how we celebrate