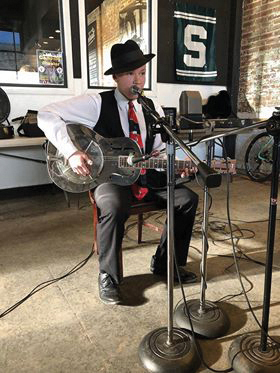 Creighton plays the blues at a recent gig

By Carolyn Marnon – Creighton Wodarski claims he is 17 going on 117.
Born in Toledo, the majority of his life has been spent in Wayne. His extended family has lived in Wayne for almost 80 years. He and his mother live in the house his grandparents purchased in 1943. It is the house where his mom grew up and now where Creighton is growing old. And what an old soul he is.
One would be surprised when encountering Creighton for the first time. His style of dress is certainly distinct for a high school student. He loves shopping online and at thrift stores for clothing spanning the eras of the 1900s to the 1940s. He wears two-tone shoes he found online. “I like dressing like this. I feel comfortable in it,” says Creighton. “Creighton’s an old soul,” chimes in his mother, Machelle Hamlin. 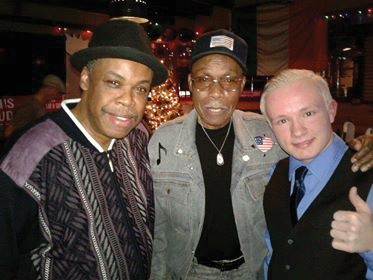 He’s only been dressing like this for a few years. His unique style came about after a good friend of his died. The shock of being the one to find his friend resulted in PTSD (Post-traumatic stress disorder), on top of the panic attacks and Asperger’s Syndrome he already deals with. He also suffers from hypochondria. Intense counseling and his music are what help him thrive.
“Blues is what I play,” says Creighton. “It’s not about being sad. It’s about the life of a human being…what somebody goes through.”
“Music is the drive in me,” he says. “I got into the blues about age 3. My grandpa gave me some blues CDs, and I would listen each night. My grandpa met a lot of old blues players. My grandpa got into the blues because of my great-grandfather, who ran a juke joint in San Antonio in the late 1940s. When I was little, my grandpa would give me a nickel to put in the jukebox to play blues.”
Creighton’s grandpa was able to make deals with local dee-jays to clean up after a show. This would get his young grandpa into shows to see Muddy Waters, Howlin’ Wolf, Lighnin’ Hopkins and John Lee Hooker.
Creighton comes from a very musical family. He has a 1938 Gibson guitar from his Great-Aunt Blue who had a tremendous influence on him. He’s related by a marriage in the family to Uncle Dave Macon, a banjo player also known as The Dixie Dewdrop, who is in the Country Music Hall of Fame. “I’m lucky to have a family that encourages me to play music.” 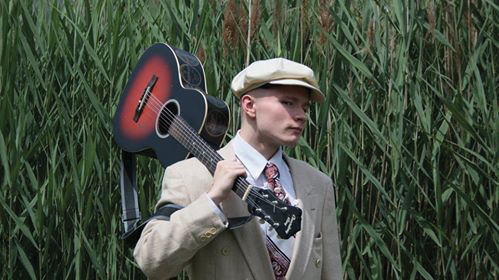 A senior at Wayne Memorial High School, Creighton has been a member of the Detroit Blues Society for about a year. With over 10 guitars in his collection, he’s also a songwriter. He picked up a guitar at age 12 when his uncle showed him how to play his first few chords. From there, Creighton went on to watch and listen to the old masters, trying to copy them.
During the US 12 Cruise last July, Creighton strolled up and down Michigan Avenue in downtown Wayne playing his guitar and singing. “I want to represent Wayne. I’d like to inspire people to music in general.”
School is important to Creighton and his family. After graduation, he would like to attend Henry Ford Community College and then University of Michigan-Dearborn to study to become a software engineer. He likes technology and marketing. Eventually, he’d like to run for mayor of Wayne. In the meantime, he would be happy to just meet the mayor.
He recently played at PJ’s Lager House in Detroit. “I don’t do it for the money; I do it for the exposure,” he said. If you would like to see this old soul for yourself, he will be playing at Costas Village Bar, 35234 W. Michigan Ave, on Saturday, October 13, at 6:00 p.m.
You can find Creighton on his website https://creightonwodarski-.wixsite.com/bpcw and on Facebook (search for Blues preacher Creighton). He chose “blues preacher” because “like a preacher preaches the gospel of God, I preach the blues wherever I can.”
Parting words from Creighton: “I didn’t choose the blues. The blues chose me.”