By : thewaynedispatch
Comment: Off
Tag: Courtney Conover, Designer Wearhouse is to the City of Wayne, Shane Mroue, Zaina Clark 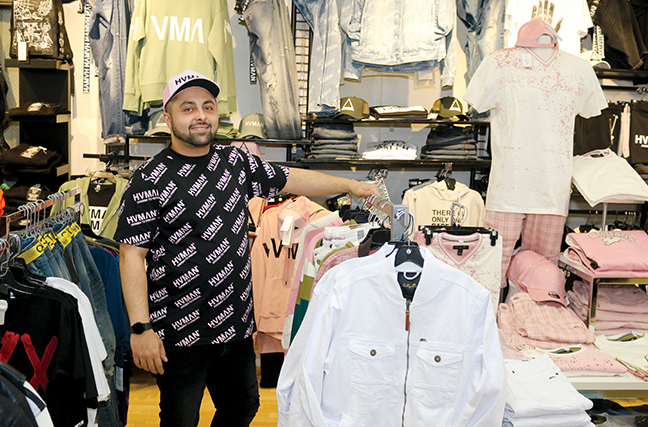 Store Manager Shane Mroue proud to be part of the family business.

By Courtney Conover – At the age of 45, my memory isn’t horrible, but it’s been better.
If I didn’t write it down, I would be liable of forgetting that I had signed up to bring the paper plates for my son’s Detroit Tigers opening day party at school, for example.
There are some things, however, that have a way of never escaping your consciousness.
Like when, as a label-obsessed junior high schooler, my mother took me to Designer Wearhouse for the very first time. The money I had earned from babysitting was burning a hole in my pocket. And I knew just what to do with it. If jeans didn’t have the Guess signature triangle or a Get USED leather patch affixed to the back pocket, I didn’t want them.
And my tale is far from unique.
Designer Wearhouse is to the City of Wayne what J.L. Hudson’s on Woodward was to the City of Detroit.
Located at the corner of Wayne Road and Michigan Avenue, the store has become a landmark of sorts—one that is quintessentially modern Wayne.
Well, the store just turned 40.
And while that revelation may make some of us feel terribly old, the undeniable upside is that, with the unyielding support of each new generation, Designer Wearhouse continues to thrive.
Long before Designer Wearhouse was even thought of, owner Zaina Clark, a graduate of Michigan State University, was working as a dietary supervisor at a nursing home. She took a one-year leave from that position to help her brother with his venture, a close-out store, which was headed for foreclosure. 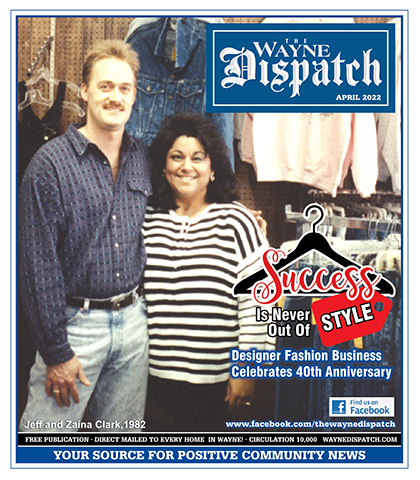 Overtime, Clark, who always had an interest in fashion design, completely rebranded the store’s image and introduced an always-current selection of inventory.
Clark never returned to her dietary supervisor position, and the building her brother’s store was housed in eventually became Designer Wearhouse.
“I had no business background,” says Clark, whose mother was a professional seamstress in Brazil. “The only business classes I ever took were in high school.”
Clark says it was meant to be, and she most definitely credits her faith for providing the necessary guidance in the form of knowledgeable individuals, who, at times, seemingly came out of nowhere.
Here, The Wayne Dispatch sits down with Clark, 62, and her nephew and partner, Shane Mroue, 30, to discuss Designer Wearhouse’s past, present, and future.
Courtney Conover: Thank you to the both of you for your time today. Zaina, let’s start with you. How does it feel to still be here?
Zaina Clark: [This store’s] longevity is proof that you don’t have to be in a mall, you don’t have to have all the money in the world to start a business. But if you make a commitment and keep your faith, you will be rewarded. I came in after Leo’s Jewelry & Gifts, but now we have other businesses that have come [into the downtown corridor], and they’ve seen that we survived…
CC: Zaina, back then, what was your vision for the store? I’m sure you wanted to sell a lot of clothes, of course. But what were you ultimately striving for?
ZC: Well back then, there was Mulholland’s Dry Goods Store, and I thought, Why not have a mini version of a department store for men, women, kids? And at that time, I saw that denim was becoming very popular—Jordache, Sergio Valente, Calvin Klein, Chic, Gitano, and Gloria Vanderbilt—I wanted to get some of those brands into the store. And I wanted to buy directly. But just because you want to sell a brand, it doesn’t mean you’re allowed to sell it. You have to apply, they have to approve you, and you have to get credit. You can buy through wholesalers—and then resell. But I wanted to buy direct from the company so I could get the most current inventory.

CC: You seem so confident! But owning this store could be considered risky. Fashion is fickle. Things go in and out on a dime. How did you manage to stay ahead of the times?
ZC: The whole hip-hop movement of 1990s really made clothing more important—through music. Music and fashion go hand and hand. At least that’s how it felt. I would watch MTV, read up on what was going on in both the music and fashion industry. Also, I just followed my gut. If I look at something and get a good feeling, I order it. And, over time, I’ve learned that if I’m indecisive, I need to skip it. And, if I look at something and say no, then it’s no. Whenever I’ve gone against my gut, I’ve paid the price.
CC: Let’s do a quick then-versus-now comparison. What were your most popular items, say, back in the 90s, the early 2000s, and today?
ZC: In the 1990s, it definitely was denim—Get USED, Major Damage, Cross Colors. But Guess was the big one. At that time, a huge part of our store was devoted to Guess—so much, that people actually thought we were a Guess store. We carried more Guess than the department stores. The 2000s saw more hip-hop merchandise—oversized shirts and denim, designers like Phat Farm, Akademiks, and Karl Kani for men. For women it was Fubu, Baby Phat, Apple Bottom, and Derion. Today, the fit of clothing has become slimmer. And instead of designer clothing, premium brands are more popular. So, the name of the designer isn’t as important. With premium goods, there is more of a focus on the material and how it’s crafted.
CC: Speaking of changes throughout the years, many of the shoppers of yore have since become the parents of today. What’s it like seeing different generations—moms and dads and sons and daughters—shopping together?
ZC: It’s something I can’t put into words. It’s definitely a humbling experience. Not only did I see this person grow up, but I also get to see their offspring. It’s gratifying that this store has lasted that long.
CC: One thing that strikes me about DW is its uniqueness. Without giving away your secret, how do you obtain your inventory?
ZC: There are local shows, big convention shows in Las Vegas, New York, and other states, and brands from all over the world come to these buying conventions. That was before the pandemic, of course. But technology has changed the business tremendously. Now we have access to even more companies through their websites. Companies also have sales reps who come directly to your store, and you can pick your product that way.
CC: I can only image how jarring COVID was to your business. Shane, you joined the company in August of 2020, and it put you on an entirely different path, right?

Shane Mroue: I got into construction at the age of 19, right out of high school. When COVID hit, I was a field supervisor for a construction company that specialized in commercial & industrial flooring…until I got laid off. While I’m grateful to have learned a trade, I fell in love with retail.
ZC: I have always relied on family when I’m in need of help, and my nephews have always played a big part in that. And I saw how well Shane interacted with customers and how natural it was for him. Plus, he enjoyed it. To be in business—and be successful—you have to love it.
CC: Would you say that you’ve been able to totally rebound since COVID? 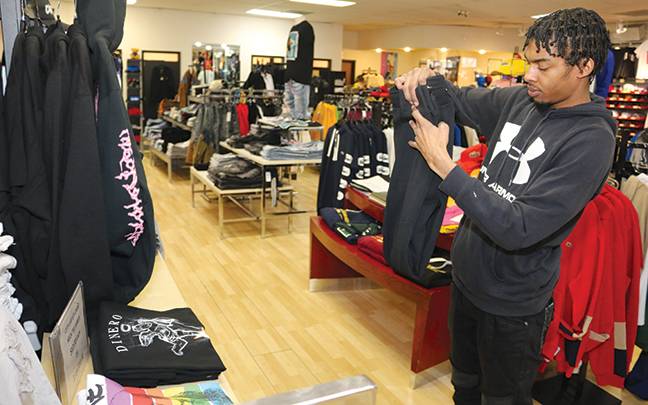 ZC: I didn’t think people would consider buying clothes. Yes, you must buy food, water, and medicine. But clothes were at the bottom of the list, in my mind. I thought this was the end. But we reopened in May of 2020, and we implemented as many safety measures as we could. I was shocked that people were coming—we didn’t understand why or from where. And that went on month after month after month. So, our doors have remained open.
CC: What would you say is the best thing about having a clothing store?
SM: Being able to converse with all different types of people. Our customers come from everywhere—as far as Jackson and Grand Rapids. Our clientele is diverse.
ZC: That is definitely the best aspect. For me, it’s about narrowing the gap of racism and prejudice. This store is a place where I can treat anyone as if they were my family. Regardless of whether they wish to buy or not.
CC: Where do you see Designer Wearhouse, say, five or 10 years from now?
SM: I would like to see an expanded presence and, possibly, in more than one location.
ZC: That is very possible. I would just like to keep the legacy going—and develop a greater online selling presence.
CC: Final question. In this day and age when apps get top billing, why should consumers take the time to visit your store in person?
SM: Oh, definitely because of our customer service, which we hear a lot about from our customers. It’s the personal interaction…from a family business.
ZC: And to actually see the product. To see it on you. That’s something that you can’t get it through an app.
Designer Wearhouse is located at 35028 W. Michigan Ave (at the northeast corner of Wayne Road and Michigan Avenue) in Wayne. 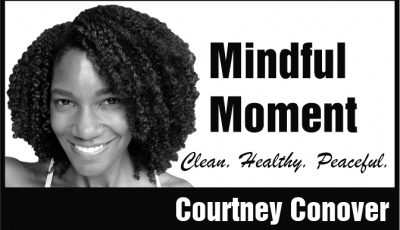