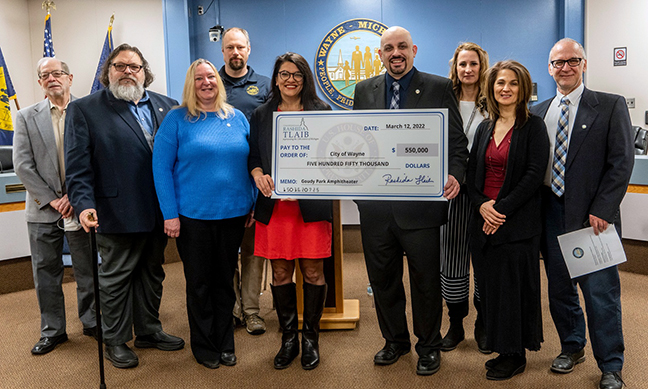 By Sarah Shurge – Concerts in the park would not be the same without the Goudy Park Amphitheater. Craft and vendor shows would not be the same without the amphitheater. Homecoming and prom pictures at Goudy Park would not be the same without the amphitheater.
The Goudy Park Amphitheater was built in the 1990s and unfortunately, it has begun to fall apart. Over time, the structure has worn because of age, the seating, the retention wall, and the stage; as well as concrete that had a reaction that broke the concrete down prematurely.
So what happens when the amphitheater needs some TLC?
The City of Wayne council realized there needed to be a way to fix it but after going to the Wayne Downtown Development Authority (DDA), they wondered where they would come up with the money.
United States Representative Rashida Tlaib was the answer.
“We have this great resource [the amphitheater] and we can’t do anything to fix it, and you can’t just put Band-Aids on stuff. So, I’m just really excited to have Congresswoman Tlaib here today to be able to help us in the venture of making Goudy Park the gem it’s been to our community and look forward to the future,” said Wayne Mayor John Rhaesa at the Wayne city council meeting on March 23, 2022.
Representative Tlaib has supported the city of Wayne in many ways like COVID funding pay, supporting employees, but most importantly, she has been present for the people of Wayne.
“Just know I’m here as a partner; it’s not just the amphitheater, it’s everything else,” said United States Representative Rashida Tlaib at the council meeting. “I want you to know a lot of people are like ‘oh, City of Wayne is small, there’s not a lot of people.’ It doesn’t matter, if there’s a need, I’m gonna be there.”
Representative Tlaib was informed of Wayne’s need to fix the amphitheater and again, she showed up for the people of Wayne. On March 23rd at the city council meeting, Representative Tlaib presented the city council with a check for $550,000 to fix the Goudy Park Amphitheater.
“I really just wanted to thank Congresswoman and your team for being able to provide this to our community. This is just amazing,” said Mayor Rhaesa.
Representative Tlaib said her own thank yous at the meeting.
“Thank you to City of Wayne for having a vision and not giving up on this. Our residents get to see it, be a part of it.” said Representative Tlaib. “One thing I love is there is a real love for the arts and music in City of Wayne, that folks are not really aware of. We know we can build cars, we know we have this amazing working class, families and the people that just love their community, but I saw it personally. And saw that you all really love bringing people together and I know the amphitheater is going to be a huge success in doing that and continuing that.”
Mike Buiten, Director of Building and Engineering, spoke about the amphitheater at the meeting.
“This is a structure, the stage and amphitheater, that has created a wonderful opportunity for thousands of people every summer to come down and visit. And this is a structure that we desperately wanted to maintain,” said Biden.
Thanks to the help from Representative Tlaib and the half a million dollar check, groundbreaking for the amphitheater is planned to begin in the late fall of 2023.
“I know I am probably not going to be your member of Congress when I think this is going to finish. Please invite me. I want to see it,” said Representative Tlaib.
“All the work that we do legislatively in Congress, sometimes we don’t get to see the end result. But this is one that I would love to be able to come back and actually see and be part of.”
As an expression of gratitude, Mayor Rhaesa presented Representative Tlaib with a key to the city, along with a travel size key for when she returns to DC.
“I feel that having background with the Federal government, the State government, and now with Local government, that I can honestly see that since I’ve been here over the 7 years, that this is the best representation we’ve ever had in Congress,” said City of Wayne Manager Lisa Nocerini, in reference to Representative Tlaib’s involvement with the City of Wayne.
At the meeting, Representative Tlaib gave a shout-out to her Chief of Staff, Larissa Richardson.
“If it wasn’t for her, we would not have gotten over 15 million dollars. It was throughout the district, not just the amphitheater, there were 10 projects and not everyone got all their projects approved but we got every single request that we put in approved. And more,” said Representative Tlaib.
Getting financial support for projects like the amphitheater is not always easy.
“As you know I get really giddy and excited about money coming to the city. We constantly have to work hard to apply for grant funding to do the things we need to do. It’s really refreshing to know that we do have successes like this. That the City of Wayne – as small as we may be, but a powerful city – that we’re being paid attention to,” said Nocerini. 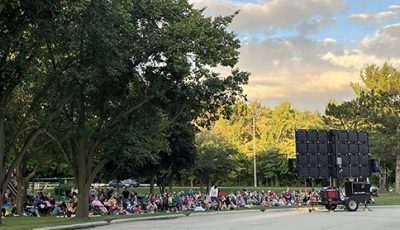