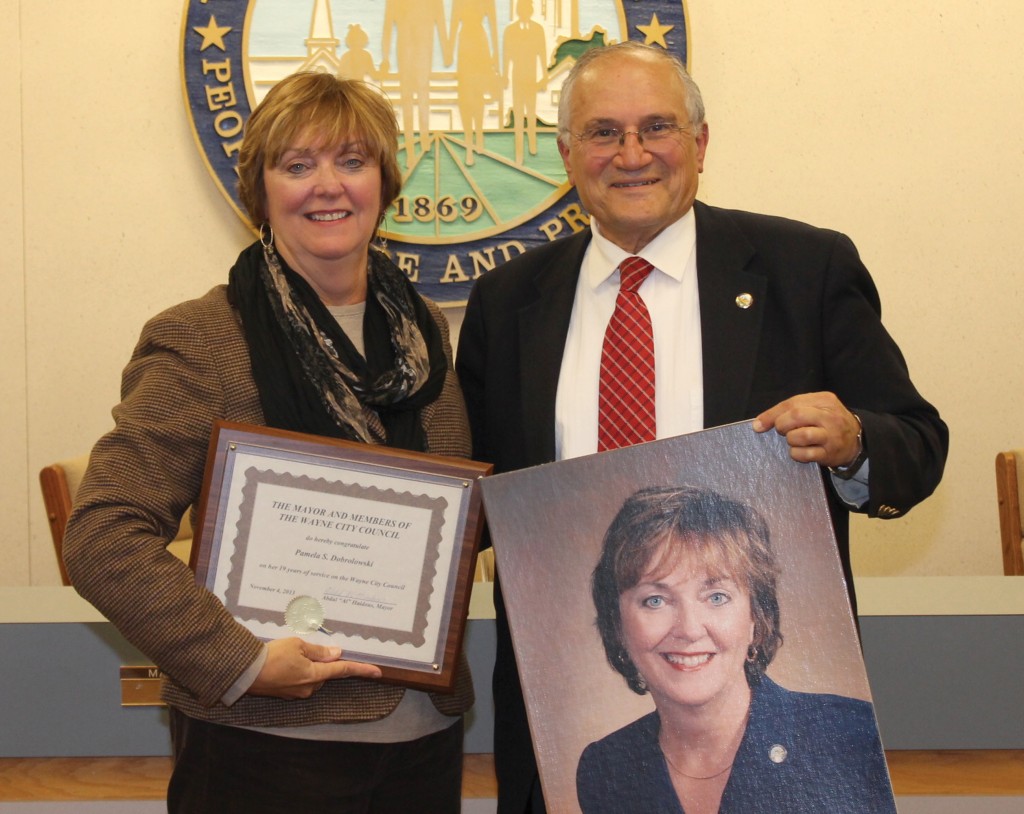 By Jenny Johnson –
For the first time in 19 years Mayor Pro Tem Pam Dobrowolski will be free on Tuesday nights. She chose not to seek re-election and served at her last council meeting on Nov. 4.
“I want to say thank you to the city and to the community for allowing me to sit up here for 19 years,” she said.
She commended the city staff for how they were able to hold their departments together during the financial struggles the past few years. She also had high praise for her fellow council members.
“I feel very comfortable leaving with this excellent council I sit up here with,” she said.  “They think outside the box and are willing to go the extra mile.”
But she did tell them two things she would like to see them follow through with.
“Light up our city for Christmas,” she said. She would like to see the entire downtown area lit up for the holiday season.
She also asked council to appoint Senior Services Director Nancy Wojewski-Noel to replace Dobrowolski on the Nankin Transit Authority.
The biggest thank you was for her family, who was in the audience.
“I would like to thank my family for standing by me all these years,” she said. She said all five of her daughters and her husband, Tom have helped her with campaigns over the years.
“Tom is my biggest supporter and advisor and the first to let me know when something was wrong in city,” she said.
Councilman Jim Henley said,  “I want to thank Pam for her dedication and service. She has been an advisor to many of us newbies when we came on.”
Councilman Albert Damitio said,  “You are going to be greatly missed by council administration and all of the citizens. Thank you very much.”
“You are going to be definitely missed. I am looking forward to working with you on projects and I know you are going to be a part of the future of Wayne,” said Councilman John Rhaesa.  “After 19 years to see you still have that fire for our community, that’s exciting.”
Mayor Al Haidous said, “Thank you for serving this community on behalf of the citizens of Wayne. I wish you the best of semi retirement. I wish Tom the best for you will have more time to put up with her.  Enjoy having the grandkids over.”
“In 19 years a lot has happened. We’ve had our ups and downs and somehow the city has always come back. It will come back again as long as everyone works together,” she said.  “I will still be around in the city and getting involved. This is not a good bye it is a see you later.”