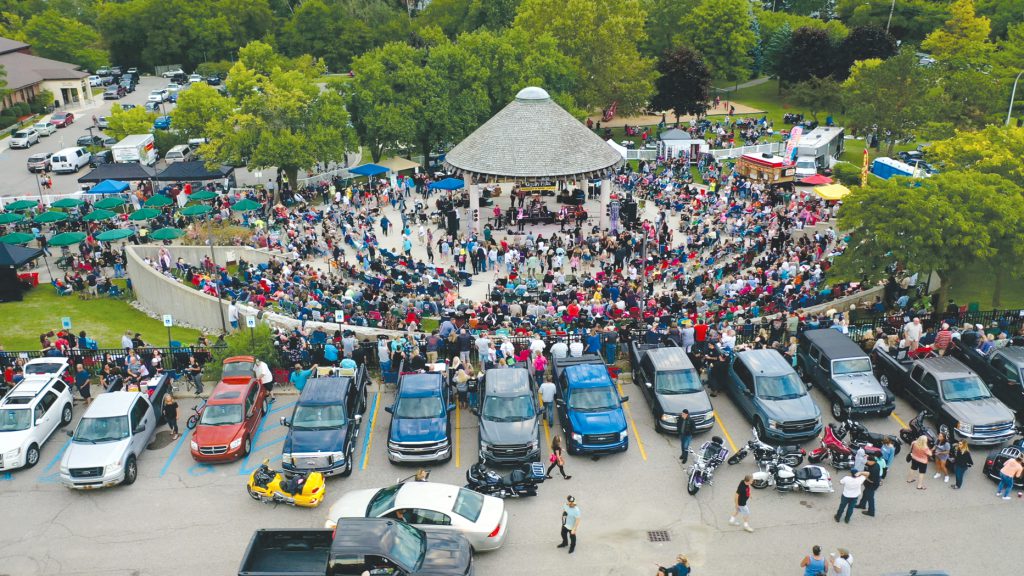 The DDA was a major contributor in the Wayne Rotary’s Summer Concert series in Goudy Park.

By Carolyn Marnon – The Downtown District of Wayne comprises the areas along Wayne Rd and Michigan Avenue from city limit to city limit in each direction. The Downtown Development Authority (known as the DDA) is tasked with implementing plans for the physical improvements that affect the appearance of the downtown and to develop cultural and recreational activities which increases activity in the area.
Community Development Director Lori Gouin recently presented an informational report to the city council about DDA activities in 2019. This report can be accessed online at cityofwayne.com/index.php/business/dda.
The DDA, in conjunction with Wayne Main Street, helps host the annual Scarecrow Show and Contest. This event draws thousands of people to downtown Wayne. This event allows individuals and groups to design and build a scarecrow on a pre-made T-frame. The scarecrows are displayed along a portion of Wayne Rd and Michigan Avenue where community members can view and then vote on their favorites in a contest with a $100 cash prize for winners.
Wayne’s Annual Downtown Days, co-hosted with Wayne Main Street, is a two-day family-friendly event that took place this year in Veteran’s Plaza with food, music, a flea market, and other activities.
TOAST Wayne (formerly Jazz on the Avenue), the annual Wayne Main Street fundraiser, is co-sponsored by the DDA and the City of Wayne. The event brings together community members to downtown Wayne to celebrate what is best about Wayne.
The Wayne Rotary’s Summer Concert series in Goudy Park is a huge event in the city. Over 2,000+ people attend the musical event each week. The DDA is a major sponsor of this event.
The DDA also sponsors Small Business Saturday with Wayne Main Street to draw citizens into the city to shop local. Karma Coffee and Kitchen hosted the kick-off event in November. Over $1000 in gift cards for local stores were placed in some of the tote bags given out. Kids had the opportunity to visit with Santa at the A Visit With Santa event held at the State Wayne Theatre.
The DDA celebrates new businesses that have come to Wayne in the past year: Tropical Smoothie Café, Bei Capelli Collection, Wayne Auto Deal LLC, The Creative Mobility Group, Allstar Patriots/Dance, Wayne Wellness Inc dba the Releaf Zone, Appliance Avenue and Allstar Patriots Cheer Gym-all on Michigan Avenue. On Wayne Rd, new businesses include Nemo’s Subs, Power Stroke Printing LLC, 7 Star Liquor, and UAW Local 845.
The DDA has met with the Wayne County Department of Public Services to discuss traffic calming and a pedestrian crossing on Wayne Rd between W. Michigan Avenue and Glenwood. Strategic planning sessions with members of the Planning Commission have been underway to provide input on the City of Wayne Master Plan Revision. New businesses have been welcomed with ribbon-cutting ceremonies at various locations. The DDA has also completed all public reporting requirements as mandated by PA 57 of 2018. Improvements have been implemented in the Downtown District. Trees have been trimmed along W. Michigan Avenue. Trees blocking storefronts have been removed. Public parking lots have been restriped. The islands next to the Court and behind Leo’s Jewelry have been cleaned and remulched. The flowerbeds along Wayne Rd from Simms to Glenwood have had the plantings removed and replaced. The area surrounding the Peace Memorial by the library has had the bushes trimmed and the area remulched along with restoring the entire exterior of the Peace Memorial.
In 2020, the DDA plans to continue landscape improvements along W. Michigan Avenue, promote a new Façade Improvement Program, add dumpster enclosures to public lots and update the DDA Plan following the completion of the City’s Master Plan.
Also in the works is the formation of a partnership with the Wayne County Community College District to institute a program which will assist in developing small businesses by providing access to business loans, business development services and networking opportunities.