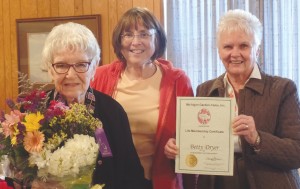 By Carolyn Marnon – As a faithful member of the Wayne Garden Club for 65 years, Wayne resident Betty Dryer was presented with a Michigan Garden Clubs, Inc. State Life Membership at the Wayne Garden Club’s November meeting. “I am just so thrilled,” said Betty. Betty plans to frame and hang her certificate beside her Mayflower Society certificate.  Her family traces their ancestry back to the Mayflower and even further to the tribes of the bible.
At the meeting, current club members shared stories of how Betty welcomed them to the garden club and held showers in her own home for the ladies as they celebrated babies and weddings.  Betty joked that when she was born, she had a great great grandmother, two great grandmothers and two grandmothers still alive, that they all consumed bacon, cream and lard and they all lived to be 100.  Betty is 98.
Betty has served as a Club President in the past.  She has chaired the local flower shows that the club once did.  She also chaired the Flowering Crab Tree Sale; the club sold crab apple trees to residents for $2.  Betty prefers to work behind the scenes and once tirelessly made holiday wreaths for the Greens Market the garden club held every couple of years.  She has worked with a youth garden group, helped with the garden at Hope Nursing Home, and helped with the Rose Garden at Goudy Park.  When the club met in private homes many years ago, Betty also made numerous table setting designs.
Betty’s husband was a doctor.  While working in his office and raising three children, volunteering was an important part of Betty’s life.  Besides being involved with the Wayne Garden Club, she also served with the People’s Community Hospital (Annapolis) Women’s Auxiliary and as a board member for the Girl Scouts.  She had also been active on several committees at First Congregational Church of Wayne.
Betty’s favorite memories of the garden club are when they did the community flower shows and the people she has met. The biggest change she has seen with the garden club is that the meetings used to take place in member’s homes, tables would be decorated and flowers arranged.  Now the garden club holds most of its meetings at the Wayne Public Library.  “I learned so much through the garden club,” Betty stated.
The Wayne Garden Club began in 1916 and will be celebrating its 100th anniversary next year. Betty became a member of the garden club when it still had charter members Elizabeth Frank and Mary Stellwagen as members.  After 65 years in the garden club, Betty says it is her favorite club.