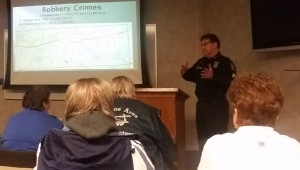 Sgt. Spunar encourages all residents to use the Wayne Police Online Reporting system that can be found through the city’s website, if possible.

By Carolyn Marnon – The most recent Police Community Meeting was held Thursday, December 3, at the Wayne Police Department.  The Police Department has recently been doing interviews to hire two more officers.  As of January 1, Lt. Buffa will be retiring from the department.  They are also in the process of hiring a Public Service Aid.
New police radios are being purchased.  The first 5 (out of 8) radios have been received.  These radios have belt clips and are lighter than the current radios. Officers will have to hand these radios off to each other at shift change since they only have 8 of the new ones, but the police department has a supply of charged batteries that will be distributed at the hand-off.  Chief Al Maciag hopes that all the radios will be ready for use before Christmas.
Attendees were given a tour of the Gun Range at the department.  It is 25 yards long and within the building.  Besides the state requirements, the Wayne Police Department does additional training at the gun range.
Chief Maciag and Sgt. Spunar encourage all residents to use the Wayne Police Online Reporting system that can be found through the city’s website, if possible.  This helps keep an officer on patrol rather than doing paperwork.  All reports are reviewed and acted on, as necessary.
Calls for service during the month of November:
32 traffic crashes, 7 residential burglaries, 7 other burglaries, 19 larceny crimes, 2 motor vehicle thefts, 2 robberies, 12 damage to property, 1 arson and 36 assaults.
A recent trend found in Wayne involves phone calls about IRS taxes.  When a citizen receives a call, the Wayne Police Department number shows up on the caller ID.  The caller says they are from the police department and if you don’t pay your taxes due right now, they will come over and arrest you.  The caller IS NOT from the police department.  The caller is hoping you will give them your credit card number or bank account information.  “We do not call and collect money for the IRS,” said Sgt. Spunar.  Never give out your credit card or bank account information over the phone.
With the holidays, please be aware of the increased risk for package theft.  It is said that some criminals are following UPS and FedEx trucks delivering packages.  When the coast is clear, the criminals will swipe the package and be on their way.  If you have an incident, let the police know.  They cannot act on what they do not know about.
If a snow emergency is declared, there is no parking on city streets.  You will get a ticket.  However, the police department allows you time (four hours) to move the vehicle. If you don’t move it, it will then be towed.
Vehicles are needed off the streets so the snow plows can come through and more easily do their job.
The next Police Community Meeting will be held Thursday, January 28, at 7 p.m., at the Wayne Police Department on Michigan Ave.