Father and son have passion for cars at K&S 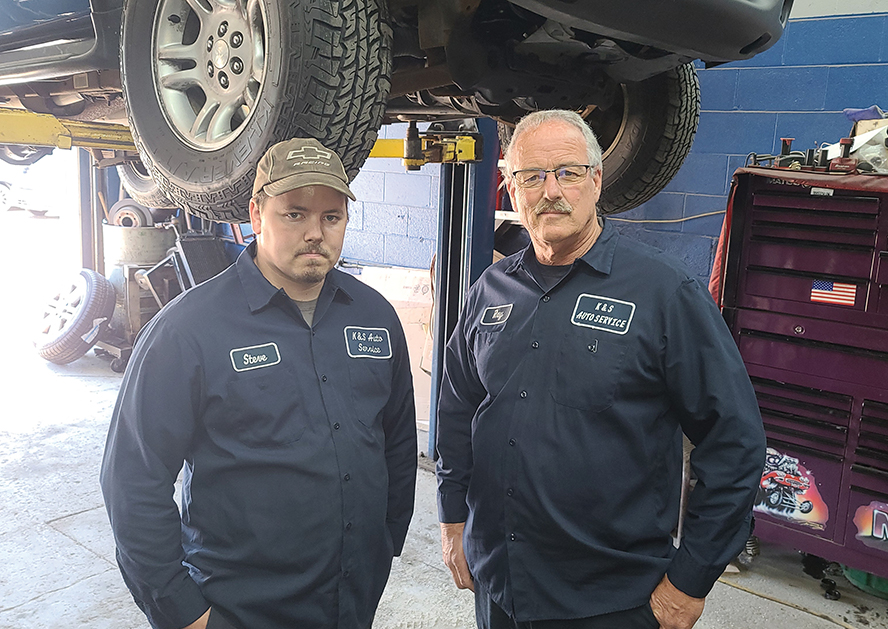 By Sarah Shurge – Ray Kull always had a passion for cars.
At a young age he began messing around with cars in the driveway. Growing up in the City of Wayne six blocks behind an auto repair shop, Kull spent a lot of time in the shop and eventually started working there.
While working in the auto industry, he learned about cars, people and how people in the industry worked. He then started working professionally.
However, quickly he found himself working in the store all day, and then working on cars all night. He decided he wanted to do this on his own.
With a push from his father and his boss, Kull, at the age of 25, left his job, purchased a building and went out to work alone. Well, almost alone.
In September of 1984, Kull started a business with his brother, Jim Kull. They called it K & S Auto Service. Over 35 years later, K & S is still in business and the brothers are still working together.
K & S Auto Service is a general automotive repair shop. As mechanics, the Kull brothers do a little bit of everything and made the business a ‘one stop shop’ for their customers.
Some of the services they offer are: oil changes, brake service, engine tune-ups, transmission replacement, automotive air conditioning service, and more.
K & S Auto Service is located on the corner of Wayne Rd. and Annapolis St. It’s business hours are 8AM-6PM Monday through Thursday and 8AM-3PM on Friday. They are not open on Saturday or Sunday.
Kull and his wife, Debra, have two children: a son and daughter. And the apple didn’t fall far from the tree. Kull’s passion for cars was passed down to his son, Steve.
Steve grew up working on race cars with his father. From ages 8-15 years old, Steve raced junior dragsters. Eventually he started working on everyday cars as well.
For 8 years Steve lived not far behind his father’s automotive shop. He grew up in the shop, spending every other day there. He helped his dad there for years.
Eventually he began working at an engine repair shop, working hands on with cars, but even more so with race cars.
When Steve was about 20 years old, he really started helping out his dad at K & S. Then, in October 2020, Steve joined his father and uncle, and started working at K & S with them.
“The best part is being able to hangout with dad and uncle everyday,” said Steve. “We are working on something different everyday.”
Ray, Jim, and Steve are all mechanics at K & S Auto Service. Ray is also the owner.
The Kull brothers are trying to see how the newest Kull will fit into the business that has been running for over 35 years. Ray Kull has high hopes for his son and K & S.
“It can be trying sometimes. We all can butt heads. But I still remember, they are family at the end of the day. It’s important to never forget that. Work is work but family is family,” said Kull.
Outside of work, Steve never grew out of his love for racing and he still races cars. Between himself, his father – Ray, his uncle – Jim, and his cousin – Jim’s son, they have four race cars between the four of them.
Steve has a 1964 Chevrolet Malibu Station Wagon. Ray has a 1968 Pontiac GTO. Jim and his son have two 1990s Chevrolet ST10 Pickups.
The four of them race cars together and have been doing it for a long time.
Ray has made it a tradition with his wife that on Father’s Day – himself being a father – he can do whatever he wants. He used to go to Michigan International Speedway on Father’s Day for a race.
Now Ray, a father and grandfather, usually goes racing on Father’s Day with his son, Steve, who is also a father to two boys of his own.
Steve’s two sons are young but are already following in the Kull footsteps and like cars and spend a lot of time around their dad when he works on race cars.
If you are looking for more information about K & S or have questions you can find them on Facebook by searching K & S Auto Service Inc. or email them at k-sautoservice@autoservice.com. You can also call them at (734)595-1550.
If you’re looking for a way to show your support for K & S, you’re in luck.
K & S finished in fourth place last year in Local 4’s Vote 4 The Best contest for auto repair shops in the tri-county area. They finished in fifth place the year before. Nominations began June 1st and you can vote for K & S by visiting clickondetroit.com.