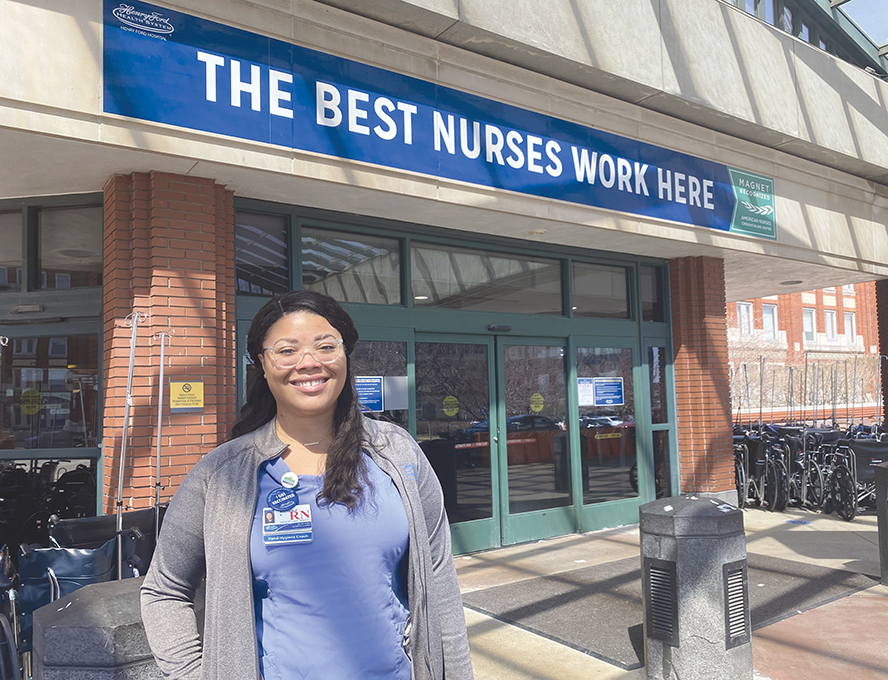 By Courtney Conover –  After enduring three full days of intense body aches—which had grown progressively worse, Wayne resident Monique Morris, 38, called her husband, Darryl, during her commute home from work.
“I told him to open the back door,” remembers Morris. “When I got out of my car, I physically crawled into the house, made my way to the shower, and then to bed. My body hurt so bad…my bones were hurting.”
Morris says that’s when she knew it—whatever it was—was bad.
Morris is a nurse who usually rises at 5 a.m.—so getting up early was nothing new. But when she awoke two hours earlier than that, sat up, and struggled to breathe, she knew she was in trouble.
And that’s when she knew it was COVID-19.
A trip to the emergency room at Beaumont Hospital here in Wayne proved her correct: A CT (computed tomography) scan revealed Morris indeed had COVID-19 pneumonia. She was then given therapeutics (including steroids, an inhaler, etc.) and advised to rest and recover at home. But when Morris found that, 24 hours later, her condition was worsening and her oxygen levels were decreasing, she decided to head back to the hospital—this time to her workplace, Detroit’s Henry Ford Hospital, where she was admitted immediately.
“There was just so much that we didn’t know about this virus back then,” recalls Morris, a diabetic, who failed to exhibit many of the tell-tale symptoms, such as a high fever, that have since become synonymous with COVID-19. 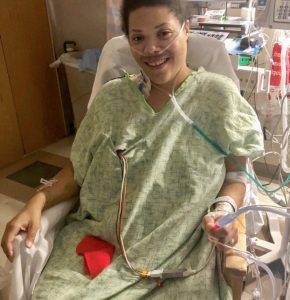 Initially, Morris was able to facetime her husband from her hospital bed. But things continued to get worse, fast. Suddenly, there was talk of what Morris had deemed the unthinkable: She fought like all get out to avoid being put on a ventilator. After all, being a nurse, she knew full well what the statistics were: 80 percent of patients who were intubated never came off the ventilator. “I was dead-set against it. It took seven staff members to hold me down,” Morris remembers.
Morris spent nine uncomfortable days on a ventilator and during that time, the downward spiral ensued. Her kidneys started to shutdown and other organs began to fail as she laid in a state of medically induced paralysis. Her condition improved only after her caregivers proned her—an act that Morris describes as being “wrapped like a burrito and turned over onto my stomach,” which allowed her lungs to expand. Through it all, Morris recalls her time hospitalized as one that was severely lonesome. “Even the machines that kept me alive were out in the hallway,” she says.
Although Morris had successfully beat COVID-19, a new set of challenges were on the horizon. Having lost 30 pounds during her two-week tenure in the hospital, she returned home severely weaker: She couldn’t walk, many fine motor tasks—like opening a jar—proved impossible, and even talking was laborious. And then there was the near-crippling anxiety. Explains Morris, “One day in the ICU equals eight days of recovery.”
And Morris’ journey of healing was just beginning. 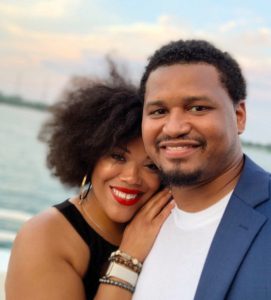 Monique with her
husband Darryl Morris.

She underwent twice-weekly physical therapy sessions amid Darryl’s unyielding around-the-clock support. A proud Army veteran who served three tours in Iraq, he took off six months from his job at the post office to be there for her every step of the way. In that time, Morris would go on to suffer two miscarriages, citing that her body just wasn’t yet strong enough for pregnancy. “I will take care of you,” Darryl told Morris.
And he did.
Morris and her husband’s love story has the makings of a modern-day Lifetime movie—it’s just that idyllic. After initially meeting in high school back in 1999, the two lost touch but reconnected in 2017 through mutual friends on social media. In August 2019, the two married quietly in the living room of their Wayne home amid the company of a handful of relatives and close friends. The addition of Beau, an adorable Yorkipoo (a Toy Poodle and Yorkshire Terrier mix) whom the couple acquired on Valentine’s Day of this year, rounds out the rosy picture.
The first words Morris uttered upon coming off the ventilator were, “Thank you, God,” and her gratitude hasn’t wavered since. Furthermore, not once did she ever contemplate her return to nursing following her recovery from COVID-19.
Having turned the corner on what could easily be characterized as one of the darkest periods of her life, Morris, who has since returned to work as an assistant clinical manager, relishes the opportunity to share her story and continues to offer hope to her patients—and everyone she meets. 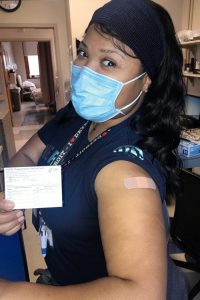 Helping others and cheering them on to good health: That’s why Morris, who became a nurse in 2017 after graduating from Davenport University, chose this profession in the first place.
The timeline of what transpired during the early weeks of March 2020—the time when Morris became infected with the virus—remains fresh in her mind. “I remember I went to work, and it was status quo; you know, like normal…then I started my shift the very next day, and I remember there were gurneys lining the hallways. One of the doctors said to me, ‘It’s here, Monique.’ It all just happened so fast.”
However, like many, Morris remains optimistic about life’s return to normalcy post COVID-19, and she is a firm believer that vaccines are paving the way. “I never want to be critically ill from COVID-19 again,” says Morris.
“If I could just reach one person, that would be a goal of mine,” explains Morris with regard to the importance of increasing Michigan’s vaccination rate. “Whether I’m speaking to my patients, family, or friends, I tell them that we have enough things in life that divide us—the vaccine doesn’t need to be one of them.” 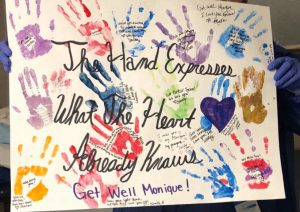 “I grew up in a time when we did things to help one another. For me, personally, getting vaccinated meant taking responsibility for my own health, and in turn, setting an example for others, who could then take responsibility for their own health,” she says.
Morris says that, ultimately, she wants people to not only know what a vaccine is but to also understand how it works, and how vaccine efficacy can be such a vital tool in overcoming the plight of this virus.
“Even if COVID didn’t affect you medically, if it didn’t take your job away, if it didn’t take your favorite hobbies away, if it didn’t take a loved one away, we’ve all still been touched by this,” says Morris.
“This isn’t about us, individually, it’s about our community as a whole—humanity. We need to work together. No matter what it takes.”

Father and son have passion for cars at K&S