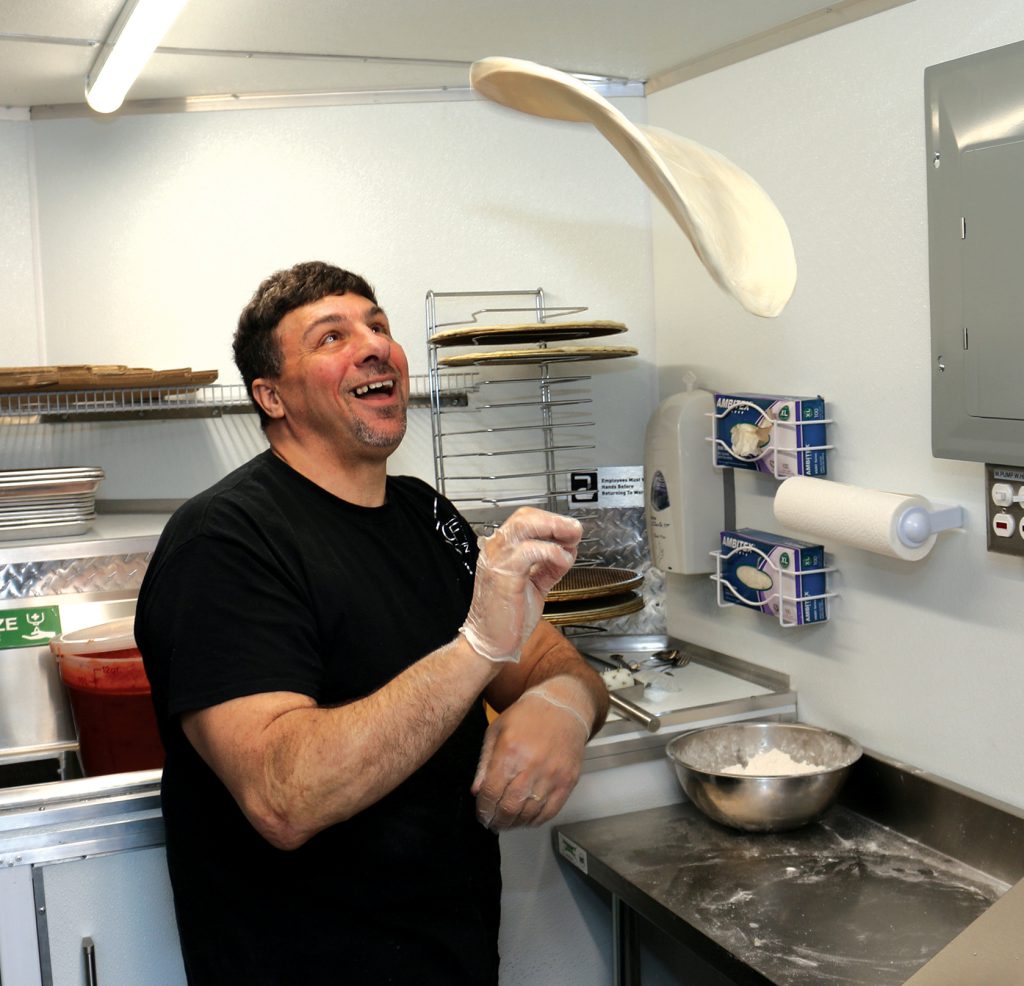 George Favazza puts a spin on making pizza in his food truck.

By Courtney Conover – Slice by slice, George Favazza, a life-long resident of Wayne, is wowing palates all over Metro Detroit.
With a delectable menu of pies with names like Fazzy Cheese Pizza, Pepper-Faz-a-Ronni!, Meat-Z-Pizza, Super-Z, and Faz-A-Laua, it’s quite easy to see why Favazza’s following is growing. And if you haven’t experienced the flavor for yourself just yet, it’s likely you’ve seen Favazza—and his pizza truck—in action on South Wayne Road.
Favazza, 55, took quite the interesting route to get there.
The story of how G.Faz Pizza got its unofficial start dates back more than thirty years—1988, to be exact.
That’s when a 17-year-old long-haired Favazza, who was rocking out in a band, also worked as a driver for Domino’s Pizza along with his bandmates.
But the hair, ultimately, proved to be a sticking point.
“They [management] wanted us to cut our hair,” remembers Favazza. “We ended up trying to do everything we could…put it under our hair net, but they would not let us work there because of our hair.”
The remedy? They quit.
Technically, they were fired.
Favazza and his crew—who wholeheartedly believed that they would one day make a living with their band—refused to cut their hair, so Domino’s refused to put Favazza and his friends on the schedule.
But, as the saying goes, When one door closes, another one opens.
And in this case, the new door was attached to a different pizza delivery vehicle: One that belonged to Pizza Hut, which was up-and-coming at that point.
“The manager from Pizza Hut [here in Wayne] had heard that we were great drivers,” recalls Favazza. “He actually tracked us down while we were on a delivery for Hungry Howie’s Pizza at the time.”
Favazza eventually left Hungry Howie’s and landed at Pizza Hut, where he was offered more money. He ended up being employed there for 17 years total, eight of them full-time.
But in 2012, Favazza took his pizza prowess to a whole new level.
Favazza started experimenting with making dough and concocting his own sauce, a move which he says was prompted—at least in part—by his Italian heritage. Favazza didn’t know where his ingenuity would lead, but he was certainly open to the possibilities. 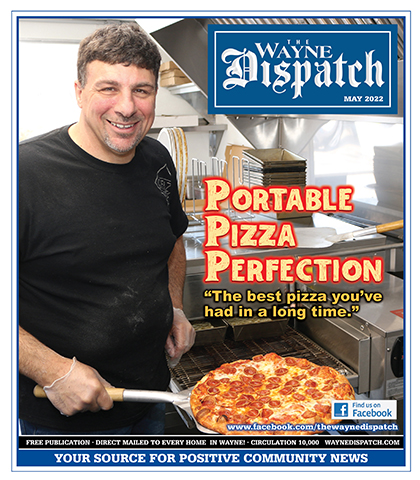 He estimated that he would need somewhere in the ballpark of $150,000 in seed money to launch a restaurant, but that didn’t seem likely. He then toyed with the idea of launching his own line of take-and-bake pizzas that patrons could buy and then bake at home.
“But then I thought, A food truck would be awesome,” says Favazza.
After all, Favazza’s tenure with Pizza Hut had helped him hone his skills in more ways than one: A few years after Favazza started working there, the manager found himself in need of someone to cut the establishment’s lawn.
Favazza stepped right on up.
And he didn’t stop there: Favazza went on to launch his own lawn care company, too, which he continued to maintain while working at Pizza Hut.
Translation: The prospect of maneuvering a long, back-heavy vehicle—i.e., a food truck—wasn’t at all intimidating to him.
The more Favazza thought about it, owning and operating a food truck would be right up his alley.
So Favazza started searching for food trucks, and eventually ran into someone who builds them. But there was one stipulation: Favazza’s wife, Sue, wanted him to pay for the truck in cash. Favazza offered to pay the truck builder as the truck was being built. The builder obliged, and the truck was built in nine months.
There was just one hiccup: After Favazza obtained his food license and worked a few events in the truck, he realized the truck simply wasn’t big enough.
Favazza then sold the truck and bought the one he is using today.
And the G.Faz pizza truck that has been making its way through and around these parts is giving local pizza connoisseurs something to write home about.
In addition to the pizzas mentioned above, patrons will also find breadsticks, garlic cheese bread, and another pizza specialty—the chicken bacon ranch—on the menu. The latter pizza features a combination of ranch sauce, BBQ sauce, and marinated chicken, which is sure to be a real crowd-pleaser.
Patrons should also stay tuned for the G.Faz BLT pizza, which is slated to arrive shortly. 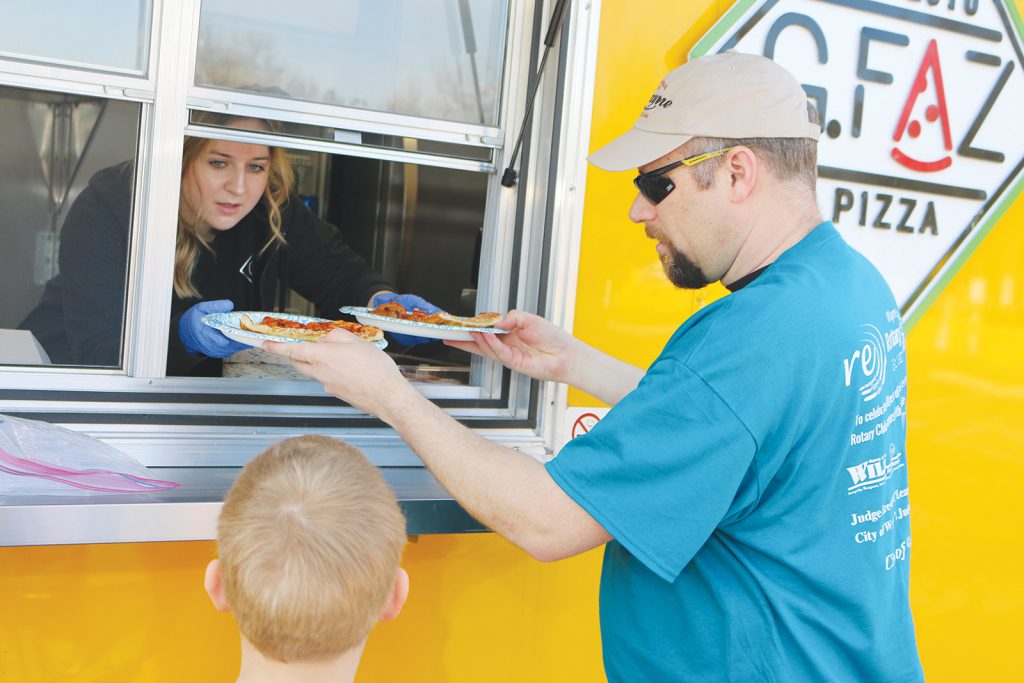 Councilman Phil Wagner and his son Nate getting some G.Faz Pizza.

“I make things old school,” says Favazza, a graduate of Wayne Memorial High School’s class of 1984, in reference to what he brings to the table that other brands don’t. “I shred my own cheese, make my own dough, and my sauce is unique. I’m always in search of the perfect meat—and the best flavor.”
The G.Faz flavor is the main draw, for sure, but Favazza still has excellent customer service front and center on the menu, too.
“I want customers to have a quick, great experience,” he says.
This whole food truck experience has been a win-win for Favazza: Not only is he doing what he loves, he’s also doing it with the people he loves.
Says Favazza, “It’s definitely been a surprise bonus working with family members…it’s been a riot! I didn’t expect it to be fun as well as work.”
Business aside, Favazza and his wife of 33 years are the parents of three adult children who have long since flown the coop. Favazza is a fan of Detroit Tigers baseball and still enjoys playing the guitar.
It’s funny: What Favazza is doing now actually comports with how he was as a youngster. He was particular back then, and he still is now.
“As a musician, imperfection has always driven me nuts,” he says, which applies to both making music and pizza. “I strive for the best.”
The G.Faz pizza truck is available for special events, including weddings as well as graduation and home owner association parties. Additionally, you can find the G.Faz pizza truck on select Thursdays, Fridays, and Saturdays at GTI Graphics, which is located at 2270 South Wayne Road (between Palmer and Glenwood). For more information, visit gfazpizza.com or call (734) 822-1615.