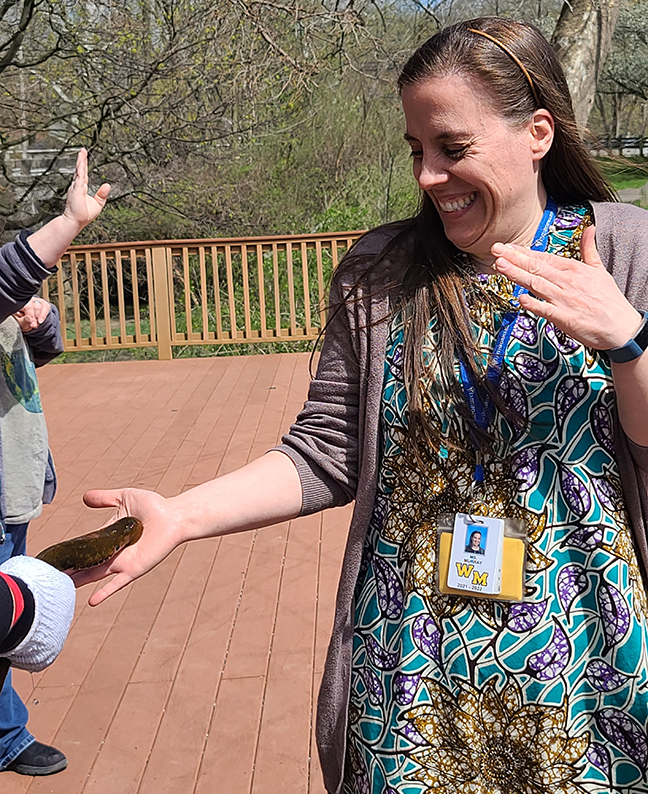 Ms. Murray, a staff member at WMHS, giggles as she participates in the sea lamprey sucking demonstration. Photo by Carolyn Marnon

By Carolyn Marnon – 118 small chinook salmon were released into the Rouge River at Goudy Park last month. Wayne Memorial High School teacher Scott Martin, members of the ECO Club, representatives of the Michigan DNR (Department of Natural Resources) and Friends of the Rouge, and other interested parties gathered on the banks of the river to release the 4-inch salmon one by one into the swirling waters. The salmon will feed in the Rouge and Detroit rivers throughout the spring and then they will move downstream into Lake Erie during the summer. The salmon will spend 1.5-3.5 years in the lake before returning to the river to spawn and then die.
How did they get the salmon to release? Mr. Martin was accepted last May into the DNR’s Salmon in the Classroom program. The program teaches how to raise salmon from eggs in the fall up to releasing smolts in the spring. Students learn how to maintain the tank and care for the fish in the interim. There are over 300 classrooms in the state participating in the program.
Two large buckets contained the small salmon swimming over, under, and around each other as they were carried to the banks of the river. One by one, they were collected into a plastic cup with water and handed to students and other interested parties who wanted to participate in the release. The DNR representative, Tracy Page, Aquatic Education Coordinator for the Salmon in the Classroom program, advised everyone participating to place a hand over the cup top to keep the fish from jumping out. The student would get as close to the water’s edge as possible and then gently let the fish swim free.
Students releasing the fish into the river, some students coming back two or three times to do more, is a simple way to stock the waterways. It was interesting to learn that the DNR also stocks the waterways from airplanes.
25,000 salmon are released each year across the state as a result of the classroom program. The survival rate in the classroom is 65-75%. Once released, everything is a predator, including water birds and crayfish, until the salmon reach about 9 inches (which takes about a year.)
It can cost $1500-2500 to get the program started in the classroom. Trout Unlimited sponsored seven schools, including WMHS Mr. Martin’s classroom. Mr. Martin needed a tank and chiller units that keep the water cold. Salmon are coldwater fish.
The release program requires two permits. The first is the Scientific Collector’s Permit which allows the classroom to hold the fish. The second permit is the Stocking permit which allows for the release of the fish. Students are not allowed to take the fish home to raise. 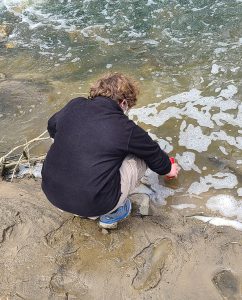 A student releases a 4-inch chinook salmon into the Rouge River at Goudy Park. Photo by Carolyn Marnon

Mr. Martin, an English teacher, said his students did mini units on the topics of land and water, some nature writing and learned about ecological topics. He wants to find other ways to incorporate the Salmon in the Classroom into the English curriculum. As the advisor for the ECO Club, he teaches students on the flora and fauna of the ecosystem.
According to the Salmon in the Classroom Teacher Guide, “The number one reason that the DNR supports this living resource program is to build a connection between students and the natural resources found around them. In Michigan, this program began modestly in 1997 with a handful of schools. Since that time, interest has exploded and the DNR is pleased to see this program has the potential for tremendous impact.”
After the salmon release, the DNR’s Ms. Page presented a talk on sea lampreys, an invasive species to our waters. It is native to the Atlantic Ocean. In our waters, the sea lampreys will suction onto fish and suck out the bodily fluids, weakening the fish. Once it lets go of the fish, the fish will have a large wound which will get infected. It eventually dies. Ms. Page had two lampreys in a tank which she shared with everyone. She walked around the circle of gathered onlookers letting each person “pet” the lamprey, which is quite slimy feeling. She also let anyone interested have their hand “sucked” by the lamprey. The first man who volunteered said “It felt like a powerful suction and left a tiny tooth,” after the lamprey was removed. This writer thought it felt like a vacuum hose stuck to the hand, but she wasn’t gifted a tooth.
If you’d like more information on the Salmon in the Classroom program, visit https://www.michigan-.gov/dnr/education/educators/sic