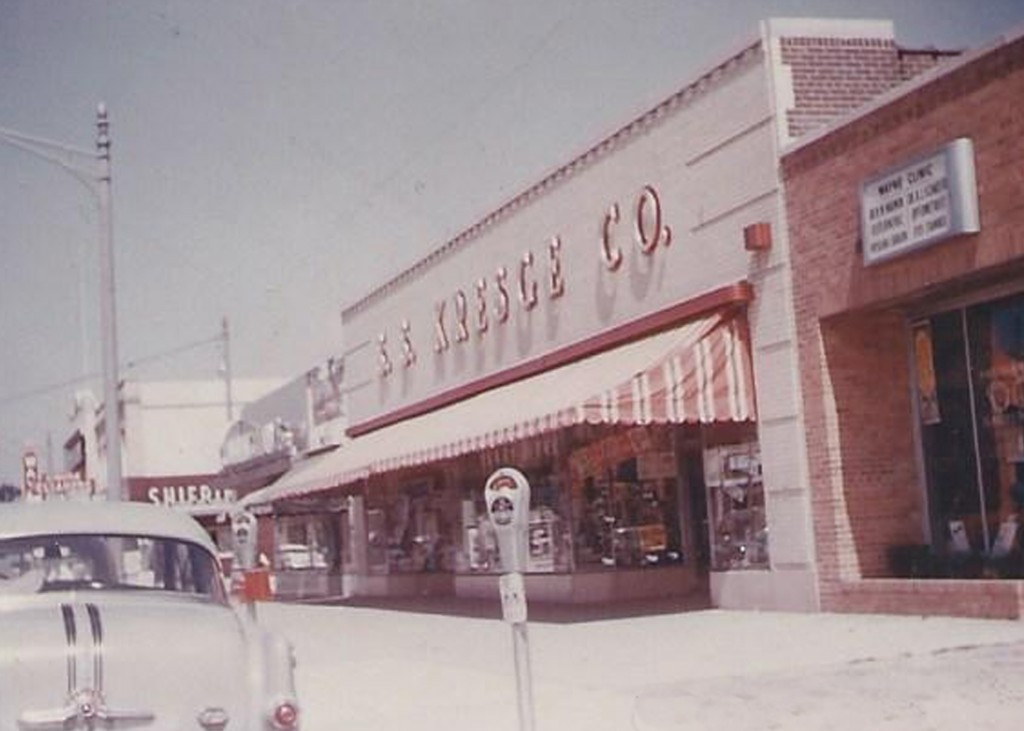 Kresge was a staple to residents of Wayne and the surrounding communities. Wayne residents enjoyed walking downtown and stopping by for a treat at the soda counter. Photo courtesy of The Wayne Historical Museum

By Darlene Hawley – Growing up in Wayne during the nineteen forties, fifties and sixties was an adventure.  Life was slower then and everything revolved around our little community.  Children played at the parks in the neighborhoods all day and came home when it started getting dark and it was dinner time.  The parks and recreation provided activities, games and entertainment that kept us all busy.  And of course the big draw was the playground equipment that provided lots of fun.  The world was a safe place then or so it seemed to my siblings and neighborhood friends.  One of our favorite pastimes was walking to town on a Saturday morning to visit all the stores and shops.  Wayne had everything families in our community might want or need.  Groceries stores, shoe shops, clothing stores, restaurants, drugstores, hardware,  jewelry and music stores, record shops, bakeries, theaters, bowling alleys, hobby shops and many others lined the streets of Wayne.  What a wonderful way to spend a Saturday, peeking in windows, walking through shops and spending the coins that we had saved to buy something special.
One of our favorite stops was the S. S. Kresge 5 and 10 cent store on the north side of Michigan Ave. at Wayne Rd.  (Today the building houses a thrift shop and Kick’s Tae Kwan Do business.)  I remember spending lots of time wandering the aisles of Kresge’s looking at all the things you could buy.  In the back of the building you could look at the birds in the cages and the turtles and fish in the tanks. One aisle was filled with counters full of candy you could buy by the ounce or pound.  There were all kinds of clothing for infants, children and adults.  Some aisles had material and sewing supplies and others had yarn and threads for knitting and crocheting.  There were lots of toys displayed in the toy section and books and magazines for children and adults.  The cosmetic counter was intriguing with its makeup and perfume.  I remember saving my money for a small heart shaped bottle that held Blue Waltz perfume.  (I’m sure you could smell me a mile away when I wore it).   The west wall housed our favorite place in the store.  A soda fountain with stools lined up offering the perfect spot to have a soda.  You could also get sandwiches or hamburgers.  Also, there were booths beside the fountain where you could sit and have your lunch.
At the front of the store there was a quick lunch counter without seats where you stood and had a hot dog and a drink.  Business people around town could get a fast lunch there.
In 1955 the store was enlarged in the back to add a partial second floor for offices and restrooms and to build back doors to open onto the parking lot on the Sims Street side.  Kresge’s closed around 1985 and opened for a few years as McCoy’s.
The history of this store is interesting.  Sebastian Spering  Kresge was born in Pennsylvania in 1867.  He died in 1966 at the age of 99.  He was an entrepreneur and built the first Kresge store in Memphis, Tennessee in 1897.  Two years later he opened one in Detroit, Michigan.  In 1912 he incorporated the S.S. Kresge Corporation with 85 stores.  Eventually, Kresge’s became Kmart.  The very first Kmart was built in Garden City, Michigan and opened in 1962.  In 1977 the Kresge Corporation changed its name to the Kmart Corporation.
Mr.  Kresge was worth millions by 1924 and continued to build his empire with his stores and land holdings.  (In today’s world he would have been worth billions.)  He started the Kresge Foundation and donated a great deal of money to organizations specifying they “promote the well-being of mankind”.  Many buildings, auditoriums, libraries and institutes across the country have been named after Mr. Kresge.

Get ready for Scarecrows