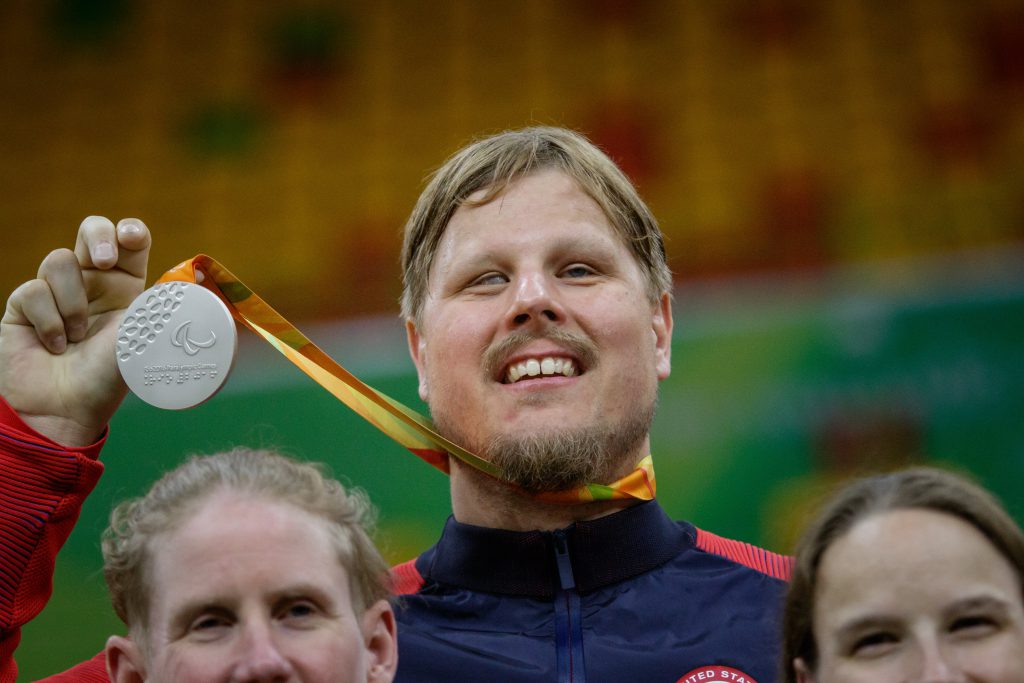 By Dave Merchant –  Winning a Silver medal in the Paralympics in Brazil before the age of 40 is quite an impressive feat. That is exactly what happen to one athlete who grew up in Wayne. He won the silver at 37 and just recently turned 38.
Joe Hamilton, who now lives in Sacramento, CA, competed in the sport of goalball in Rio and helped earn he and his teammates a Silver medal by defeating the host country of Brazil 10-1. In the Gold medal finals they fell to Lithuania 14-8.
“It was amazing to play in front of 10,000 people,” Hamilton said. “To beat the host country was also a big deal to beat the host country. “I really liked having my mom (Barbara) there to see me.”
Hamilton explained that as part of the game the crowd is expected to be silent like in tennis and golf. But they are allowed to cheer and the  coach can give instructions during breaks, injuries or timeouts.
The teams at the Paralympics are put into pools of five. Teams are awarded three points for a win and one for a tie. Only eight teams make it to the finals. They beat China and Finland in pool play. In the semis that beat the #2 team in the Paralympics from Germany.
In the win in the semifinals, nine of the USA goals were scored on penalty shots which is truly amazing from Hamilton’s perspective.
Hamilton has been unable to see since he was in the seventh grade. He went to school at Livonia Churchill because they had a program for students like him.
Goalball is a sport developed in the 1940’s for blind athletes.
“It is very unique and it has been adapted to people with disabilities,” Hamilton said. “It was to build skills and confidence to blind people.”
The sport is played on a volleyball court. The net is in the back of each side and reaches the entire length of the court. There are three players on each side: a center, a left, and a right. The ball is rolled or bounced and it has bells inside it to make noise and to be audible.
Of course, it is a very simple explanation of the game because there is much strategy and skill involved. You can kick the ball on defense but it is a penalty on offense. An eye shade is required to be worn by all six athletes on the court.
Hamilton also attended Western Michigan University where he graduated with a degree in English. Some of the career highlights for this six-foot, four-inch Paralympian include being a two-time Paralympian (2000, 2016), a Silver in the 2015 ParaPan American Games, a Bronze in the 2014 IBSA World Goalball Championships and 11th place in Sydney.
As an infant, Joe had a corneal transplant after being exposed to the rubella virus in the womb. The transplant restored partial sight to the left eye but a snowboarding accident at the age of 12 left him totally blind. Just two years before the accident he was introduced to goalball.
He is looking forward to playing in the Paralympian Games in 2020 in Tokyo. His life-partner Christella Garcia who is also totally blind and competed in the 2016 Paralympics in Rio in judo. She went up in weight class and finished with a Bronze medal, which is quite impressive because she had to gain some weight to compete. 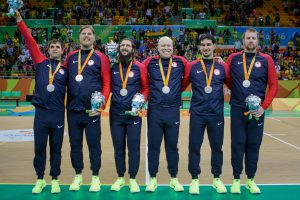 Joe and Christella joke about who is tougher but he jokingly says he just stands in the corner when she practices Judo. Admitting she has the upper hand.
He grew up in a family that loved sports, he was very excited when he found his sport. According to him it has been his passion to train and share the sport with as many people as possible.
For him the sport represents a similar value to kids who can see and play baseball. It builds confidence and allows people who can’t see to compete and enjoy something that allows them to be successful at.
Off the court, he enjoys listening to stand-up comedy before taking the court. He admits laughter keeps him relaxed and focused.
Joe’s mom Barbara Hamilton lives in Redford; his dad Harold Hamilton still lives in Wayne; and he has two brothers David and Jeff.
“This game allows the seeds of confidence for kids who are blind,” he said. “Goalball is so awesome.”